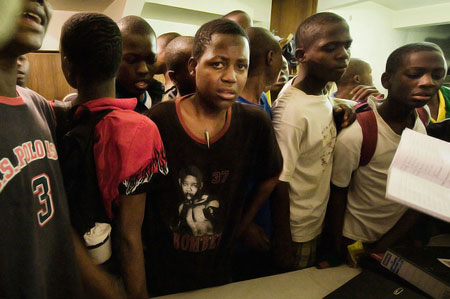 There are over three million Zimbabwean refugees living in South Africa, a number that rivals the oft-publicised flight of Mexicans to California, with 6000 more entering illegally through its porous border every day. Life back home has become unbearable for most, and a collapsed economy and dire humanitarian conditions have driven many to either starvation or prison. A cholera epidemic has ravaged the cities and farms, with 87000 infected and 4000 already dead. And a messy power-sharing battle between the two main political parties has the country in a dead grip, with UN officials saying the number of asylum seekers is higher than ever.

Under the leadership of Bishop Paul Verryn, the Central Methodist Church in downtown Johannesburg has become a place of refuge for Zimbabweans seeking a new life in South Africa. Some 5000 line up here every evening for a place to stay safe from the xenophobic violence that has dogged Johannesburg’s townships, spilling out onto the pavement of neighbouring Smal Street when all the floor space inside the church is gone.

Lately the situation has been worsening and the role of the church has become more important than ever. Two weeks ago the Home Affairs department of the South African government announced that it was closing the “showgrounds”, an informal refugee-processing facility at the border town of Musina seven hours north. Transportation was arranged within days for the 5000 asylum seekers living on the small plot of scrubland, with most of them destined for Johannesburg, and most of them destined for Bishop Paul’s church.

This is the story of a return visit to the Central Methodist Church. 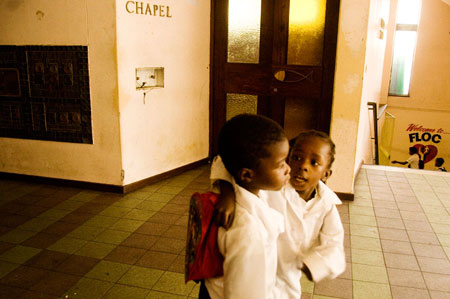 Schoolchildren on their way to class at the FLOC (For Love of Children) primary school in the church basement. 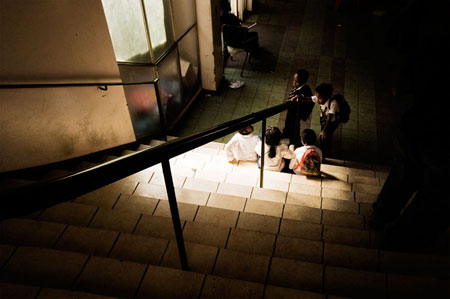 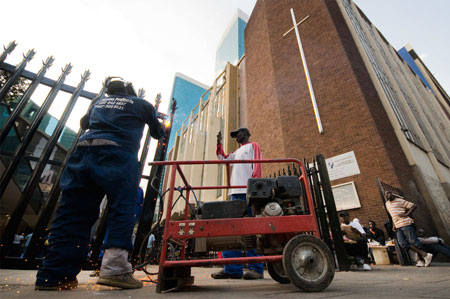 Day labourers construct the final stage of a fence designed to keep refugees from sleeping on the Smal Street mall. 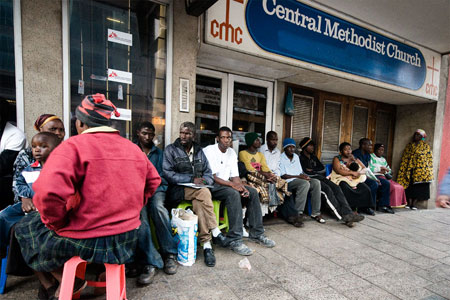 Refugees queue outside the MSF clinic. 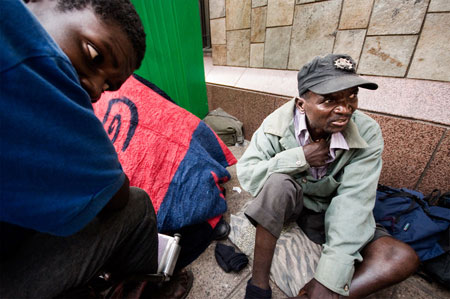 Returning from a day spent begging at a traffic light in far-flung Krugersdorp, a cancer-stricken man waits for medication outside the clinic. 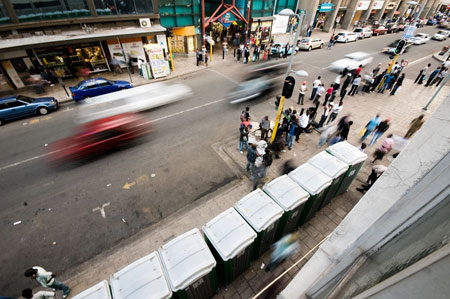 The street scene outside the church as refugees begin returning for the evening. 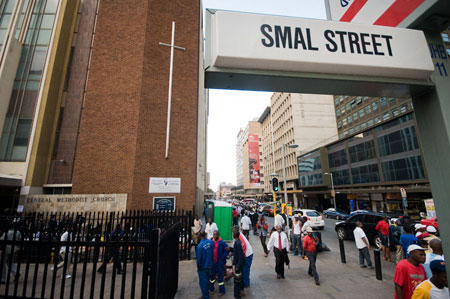 Late afternoon foot traffic at the intersection of Smal and Pritchard streets. 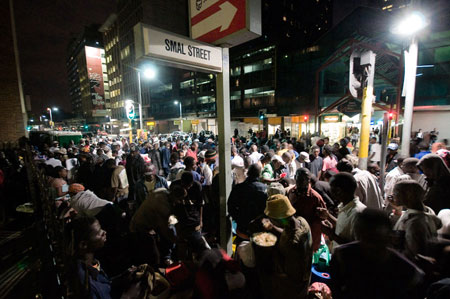 The same scene again three hours later as refugees arrive back at the church from their days spent in town. 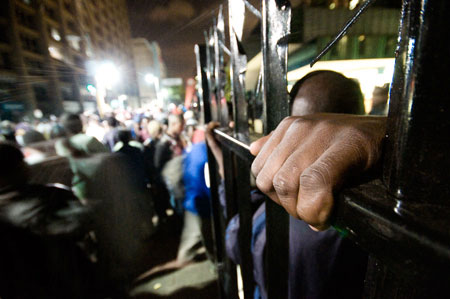 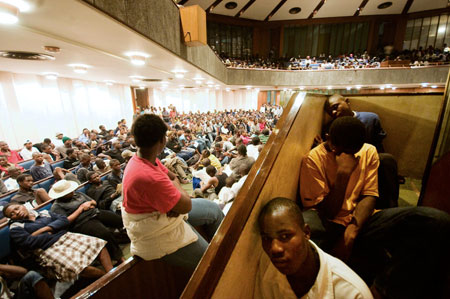 Attendance at the daily refugee meeting. 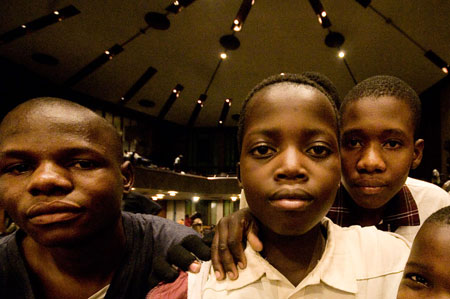 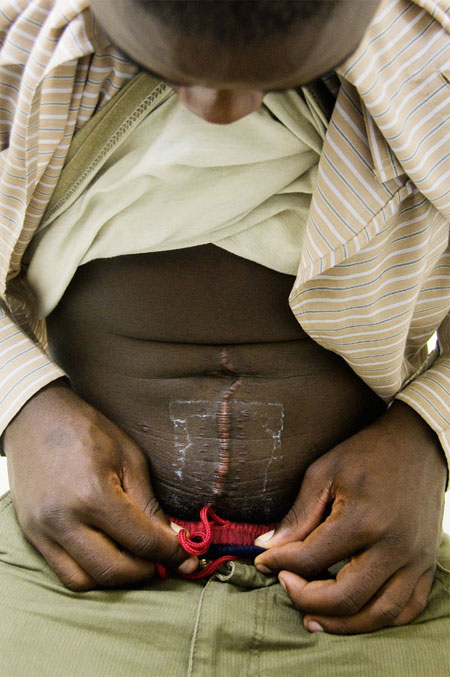 Remido, 17, displays the scar from the operation that saved his life. A year earlier in Zimbabwe, he and his brother were poisoned by their stepmother in a wanton act of malice. His brother died but he survived, remaining in Harare just long for his condition to stabilise before beginning a treacherous, months-long journey to South Africa. Snippets from audio interviews with Remido and others will be launching on the MSF site in the coming days; links forthcoming. 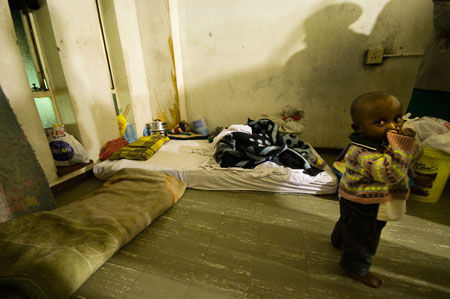 Shadow of a caretaker. 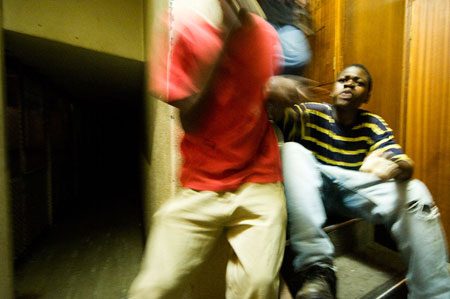 Roughhousing in the halls. 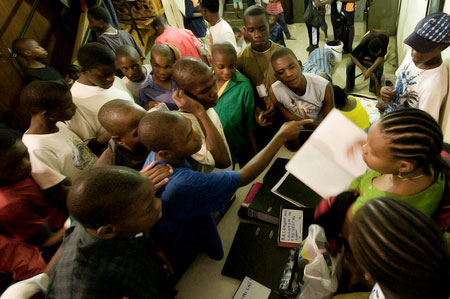 Inside the vestry, a dorm room of sorts for some of the several hundred unaccompanied minors, an MSF worker checks with her registry book before distributing the nightly ration of e’Pap, a dehydrated maize porridge mix donated to the church by the Red Cross. 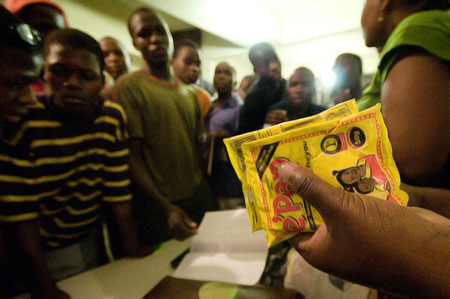 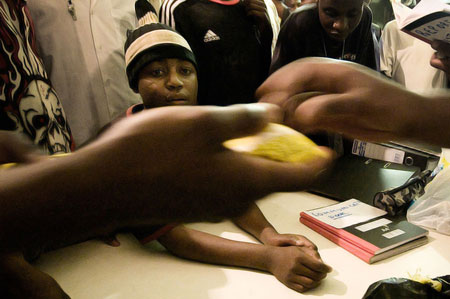 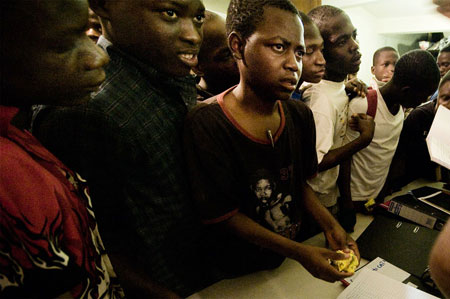 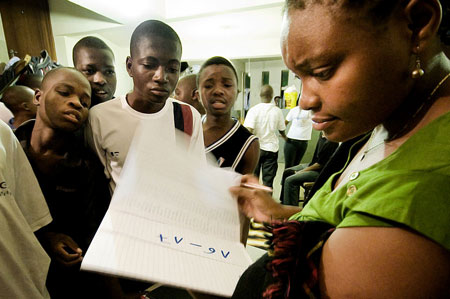 Boys look on in worried anticipation as an MSF worker flips through the registry book looking for their names. 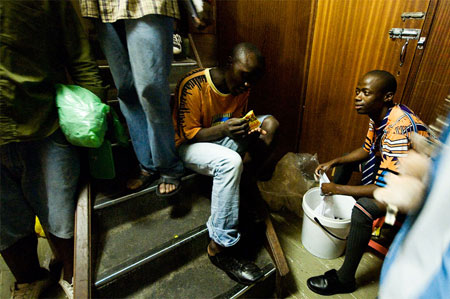 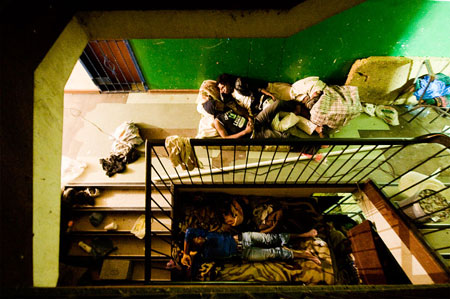