The keen ear hears the phrase “since World War II” a lot in Kabul. The strategic and logistical hub of the so-called Global War on Terror, the city plays host to a dizzying cacophony of rah-rah rhetoric. A NATO commander will tell you that the current troop build-up in the Afghan National Army, designed to take over from retreating Western powers, is “the largest army assembled since World War II”. The increase in deployment period from 12 to 15 months with the United States’ much-discussed troop surge has resulted in “the longest Army combat tours since World War II”. Or that it’s the “first war fought outside Europe by the united West since World War II”.

But this is a flawed metric better suited to an XBox game than international war. Vietnam had a more difficult battlefield; Korea, a better-equipped opponent. Even the Gulf War, all eighteen months of it, saw more American deaths than Afghanistan has in ten years. Kabul, rebuilt since 1992 to a reasonable facsimile of its pre-war shape, is a functioning city first and a fortified war hub second. The two often exist in an uneasy tension, like toy soldiers fashioning a fortress from a sandcastle, and indeed many we spoke with in Kabul were resentful of NATO’s hawkish presence in a city they’d like to reclaim for themselves. But the majority here live out lives of adjusted normalcy, less cohabitating with the military machine than occupying an altogether different city from it. These are their stories. 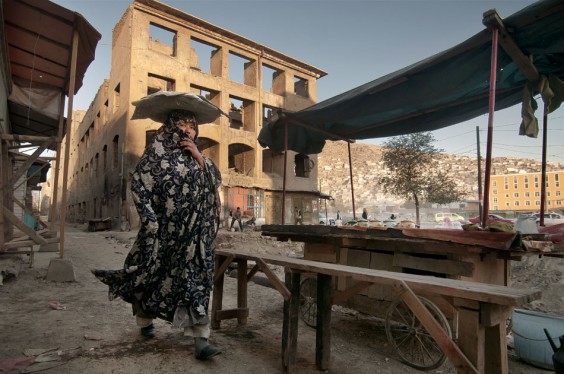 Veiled Suspicion: A woman walks through a Kabul alleyway laid to waste during the country's last civil war. Though Afghans are quick to denounce the oft-cited (and impossibly exaggerated) figure of 90%, much of Kabul's infrastructure was destroyed in the years following Soviet withdrawal as extremist factions on both sides jostled for control of the country's supply routes. Afghanistan has weathered alternating bust-bust cycles of civil war and international engagement since its last monarch, King Zahir, was deposed in a 1973 coup. 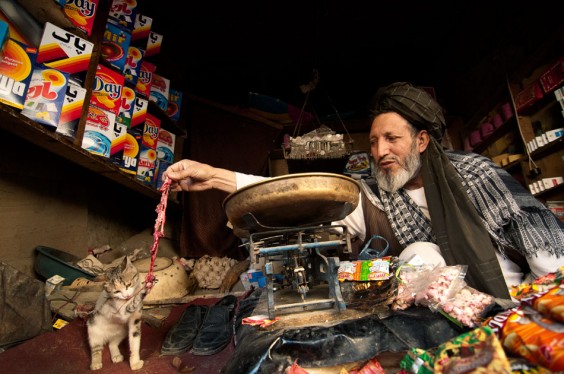 Single-Minded: More fascinated by a piece of string than the strip of meat it hangs from, a cat plays in a alleyfront sundry shop. 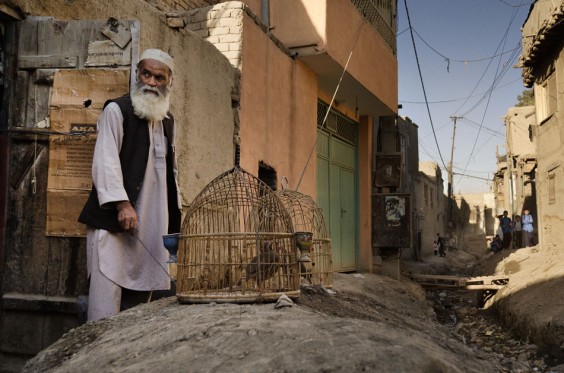 One (Is The Loneliest Number) 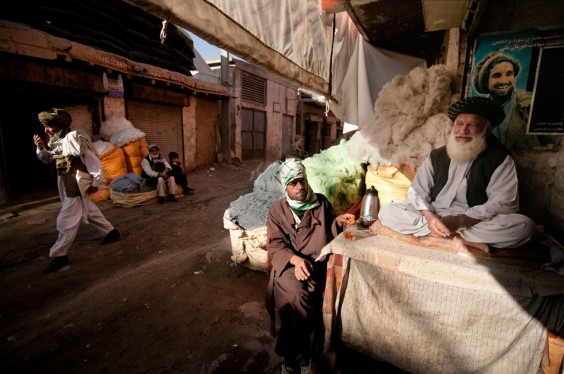 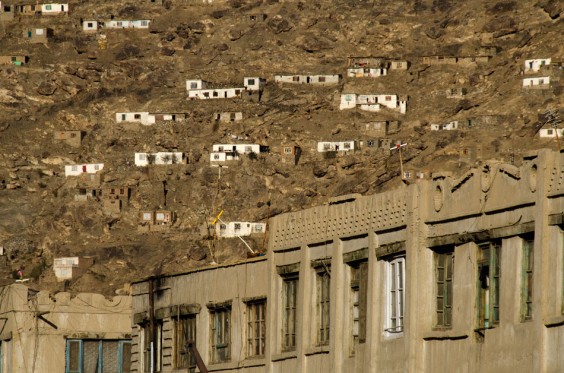 Thousand Year Old Skyscraper: Tenements crawl up a mountainside in Shahr-e-Kohna, Kabul. At 1800m above sea level, Kabul is among the highest major cities in the world. 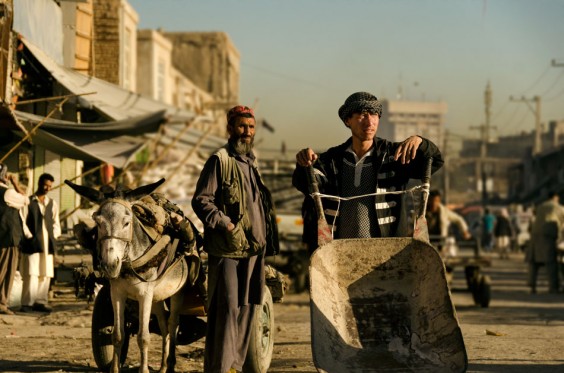 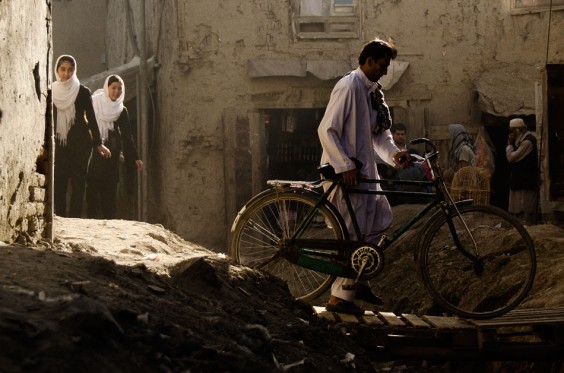 A Warren of Mud and Stone: Informal commerce and commuters converge in a knotted, multi-level maze of alleyways in Chindawol, Kabul, many of which date back over 2000 years. 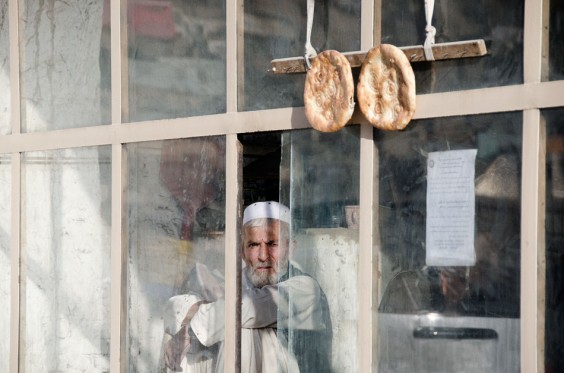 Staple on the Stake: A baker awaits customers at a naan stall in Chindawol, Kabul. 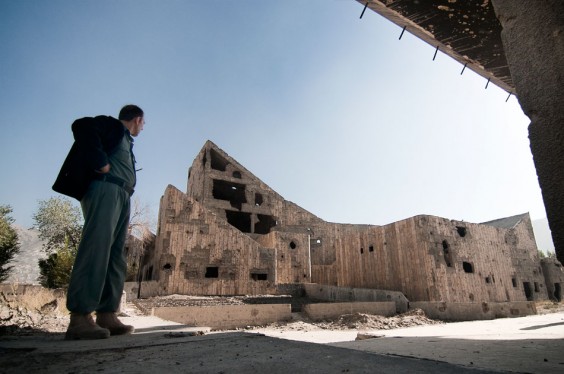 Multipurpose: An Afghan National Police officer looks out over the bombed-out remains of the Soviet-era Palace of Science and Culture in Kart-e-Char, Kabul. Boasting a library, exhibition space, classrooms and an outdoor cinema playing an unending loop of Soviet propaganda films, the palace was once an emblem of the grandiose new ideas sweeping through Afghanistan in the 1980s. After the Soviet withdrew, it became a key site in the battle for Kabul as opposition groups weathered rocket attacks inside its heavily fortified walls. 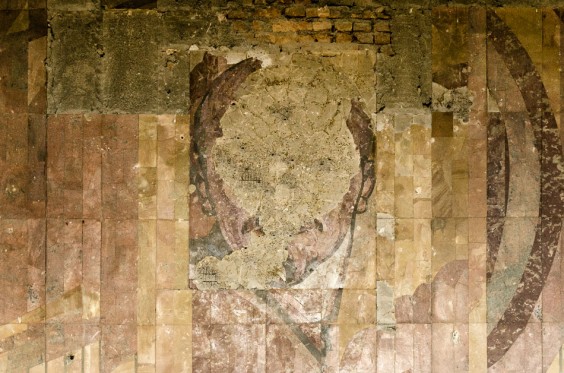 Illyich Defaced: A mangled portrait of Vladimir Lenin greets squatters and trespassers inside the Palace of Science and Culture. 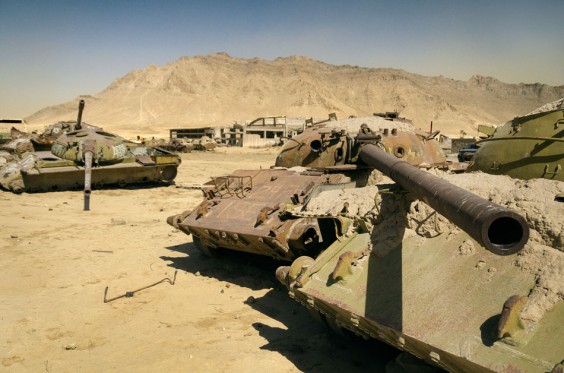 Rusted Ambitions I: Soviet tanks lie rusting in the deserts northwest of Kabul. 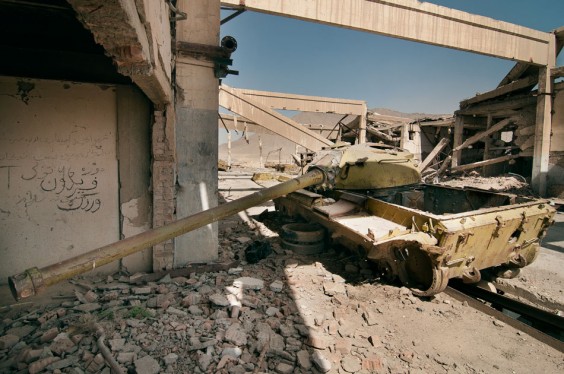 Rusted Ambitions II: Although the majority of Soviet tanks lost in Afghanistan were lost in battle, others were captured by the Afghan Mujahideen and are still in service decades later. 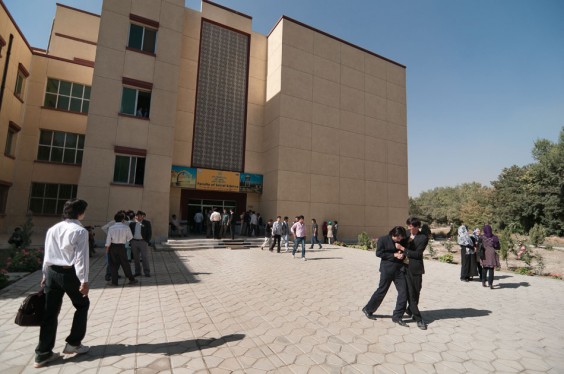 Future-Facing: Kabul University undergraduate students, most of whom were born in the chaotic half-decade between Soviet withdrawal and the beginning of Taliban rule, congregate on the plaza outside the Faculty of Social Sciences. Built with Pakistani seed money and propped up by a South African telecommunications giant, the faculty and the university at large are designed to prepare students for an increasingly globalised future, with exchange programs in place and teachers often sourced from outside Afghanistan. 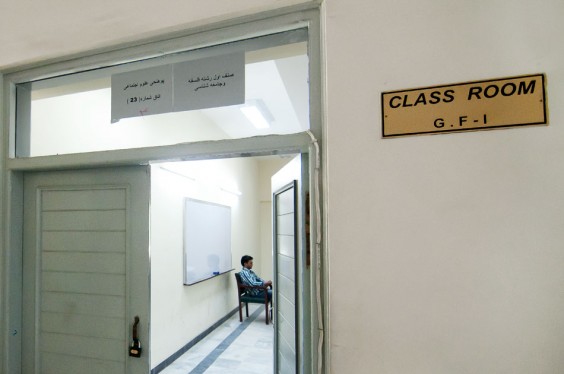 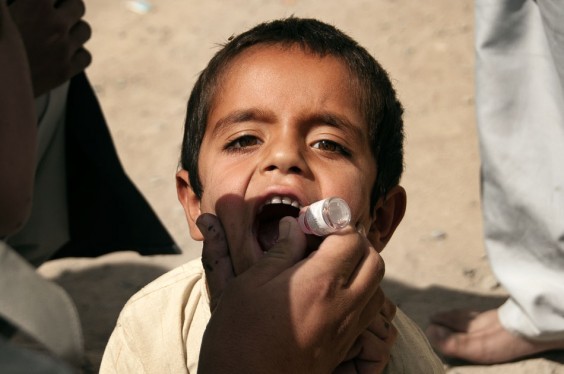 Vaccine: A UNICEF volunteer administers an oral polio vaccine to a child in Kandahar City. Backed with funds from CIDA (Canadian International Development Agency) and two departments of the United Nations, polio eradication has been the most-discussed of Canada's three signature projects in the country. Afghanistan is one of just four countries in the world where the disease is still endemic. 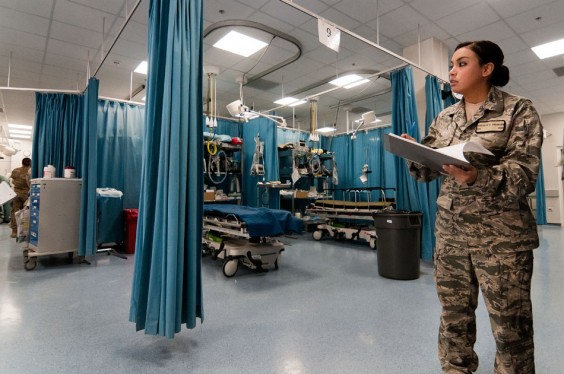 Combat Hospital: A specialist prepares the ER of the Role 3 trauma hospital in Kandahar for an incoming medevac of Afghan civilians wounded by an IED blast. 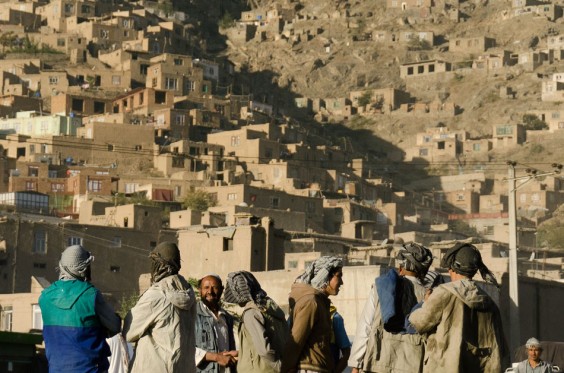 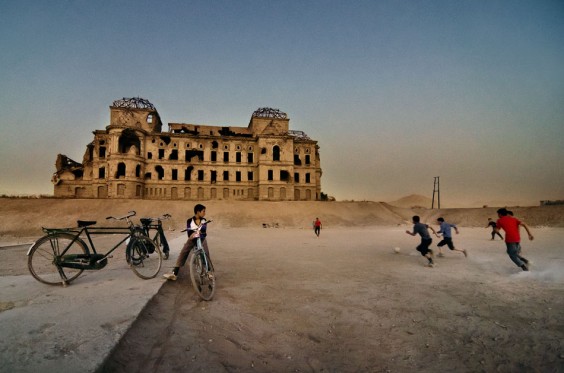 At Play in the Shadow of Ghosts: Afghan boys play football under the hulking ruins of Darulaman Palace, sixteen kilometres southwest of Kabul. Built in the 1920s as the show-stopping centrepiece for a new capital city to be connected to Kabul by tramways, for a half-century the palace was only sporadically occupied before war gutted it. The planned city, meanwhile, was never built. 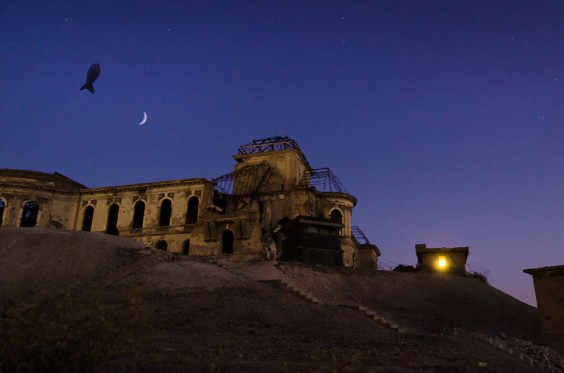 Crescentlit: A waxing crescent moon rises alongside the "moon of Kabul", an ISAF surveillance airship that took to the skies in summer 2011. Dubbed the Blue Devil, the dirigible is equipped with cameras and listening devices to monitor conversations and detect insurgent threats. The airship is longer than a football field and seven times the size of the Goodyear Blimp, making it the largest airship produced since, yes, World War II. 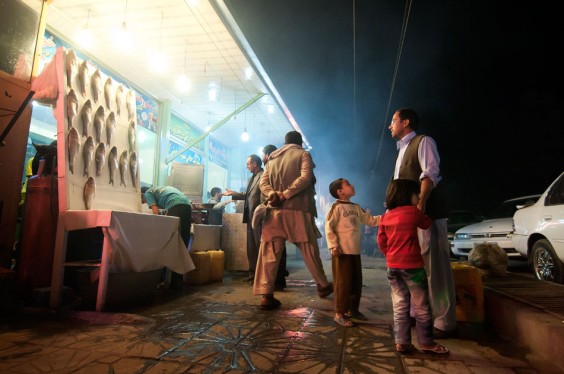 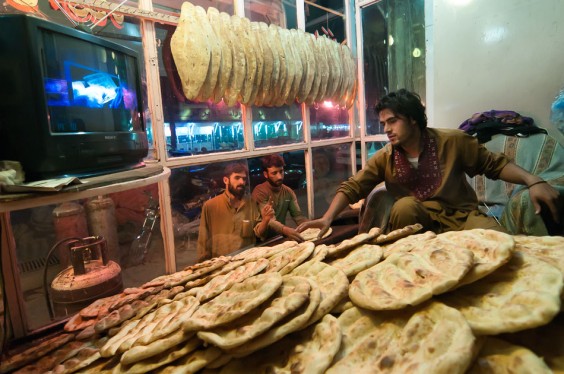 Tandoor Fruit: Disc by disc, a vendor clears out the night's stock of Obi Non, an Uzbek-style naan bread popular in Kabul. 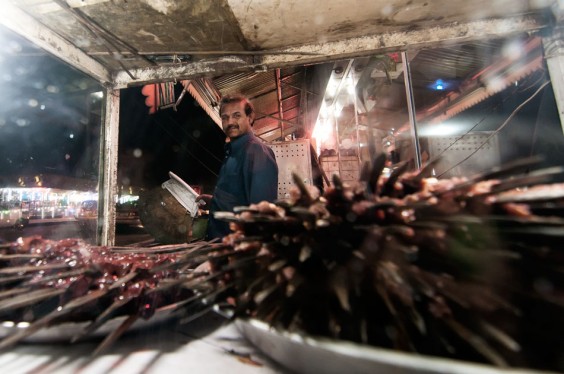 Grill Fruit: Meat, cooked and uncooked, wait for hungry passerbys during a slow night at a kebab stand opposite Pārk Shāre Naw, Kabul. 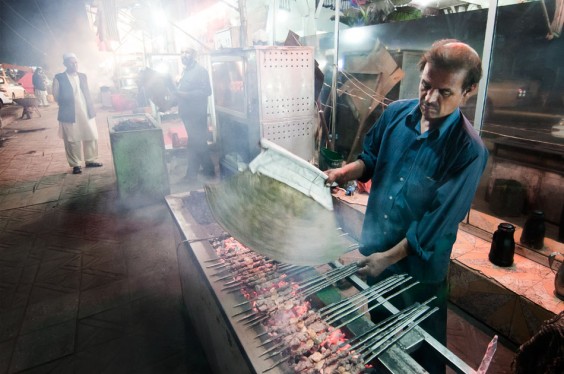 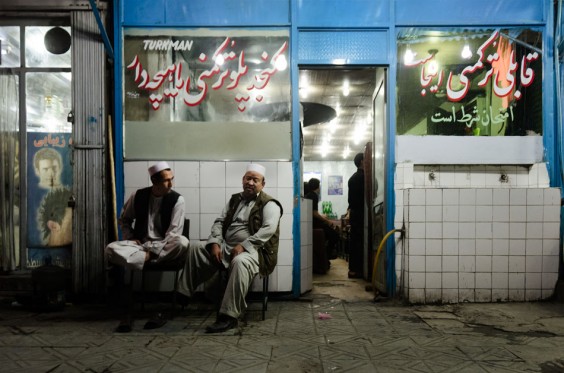 Men and their Hairstyles