For all the ink, here and elsewhere, given to its Operation Attention training mission in Kabul, Canada’s largest operation in Afghanistan remains the comparatively unheralded Mission Transition Task Force (MTTF). Based in yesteryear’s focus province of Kandahar and drawn on the contributions of 1300 Canadian Forces soldiers and support staff, the MTTF is responsible for closing out Canada’s six-year, multi-billion dollar combat mission in Kandahar. 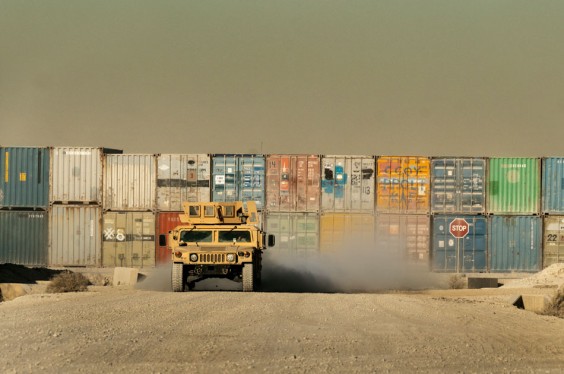 Humvee Dust Up: An ISAF (International Security Assistance Force) humvee kicks up a cloud of dust against a row of Canadian sea containers awaiting passage from Kandahar Airfield (KAF) to the sea ports of the Indian Ocean and back to Canada beyond. In closing out Kandahar, the Canadian Forces estimate some 1800 containers of military hardware and support equipment were shipped through Pakistan between August and December 2011. 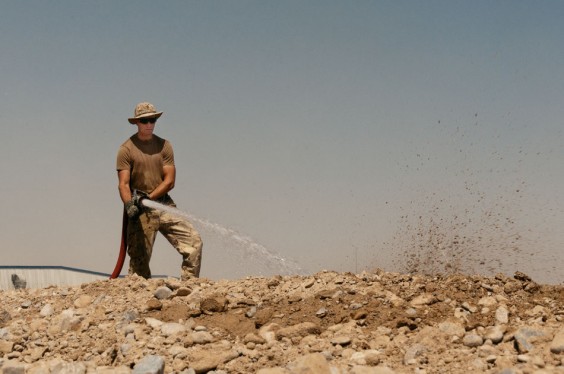 Chemical Cleanse: The soil remediation program sets Canada's combat close-out apart from other nations' withdrawals. In an effort to curb environmental damage to its former Forward Operating Bases throughout Kandahar province, soil from around the bases is shipped to a remediation plot at KAF and treated with a chemical compound to flush out heavy metals and harmful toxins. 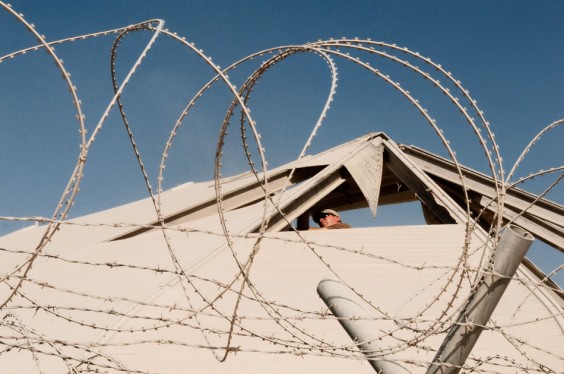 Razor Window: A Canadian Forces soldier tears down a maintenance shed at one of the 19 Canadian sites on Kandahar Airfield being closed or transferred to other coalition forces. A total of 1300 Canadian soldiers were deployed to the MTTF on six-to-nine month rotations, the last of which end this week. 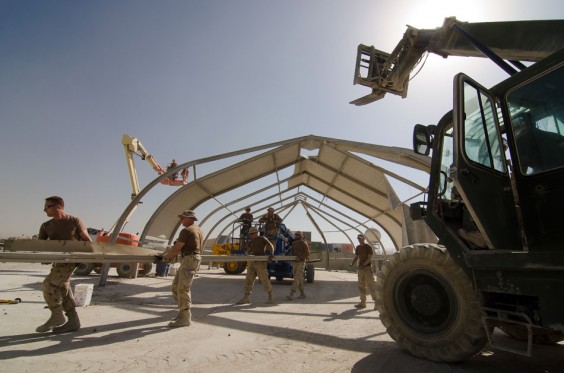 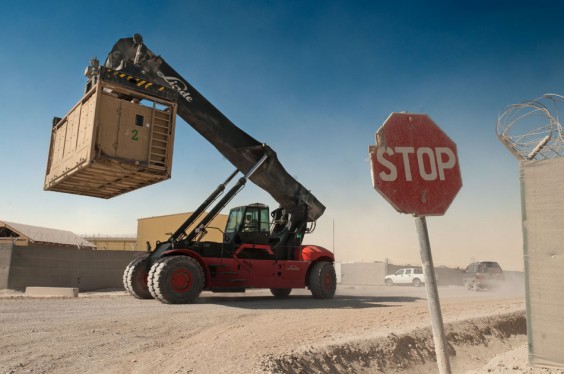 Can on the Move: A Canadian sea container loaded with tarpaulins is carted off to the Humanitarian Assistance Yard. Canadian flag-bedecked sea containers are a familiar sight on the roads from KAF into Kandahar City, with several dozen containers having undergone CIDA (Canadian International Development Agency)-sponsored conversions into residences for Afghan civilians. 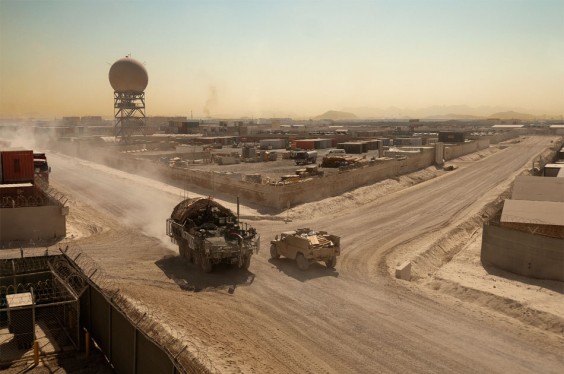 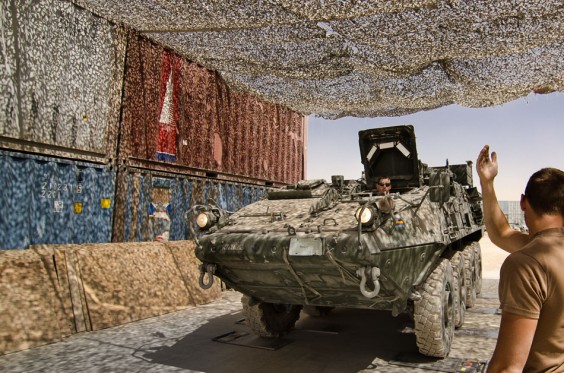 Wave/Weigh: To save taxpayers from the shipping burden, buyers are sought among the other coalition nations for every piece of the Canadian war machine. All items remaining must be shipped back to Canada, with high priority and protected technologies flown home via a staging area in Kuwait and less important items driven overland in convoys through Pakistan to ports on the Indian Ocean. Items deemed too complicated to ship home are donated to the Afghan National Security Forces. The tank pictured here was sold to the United States. 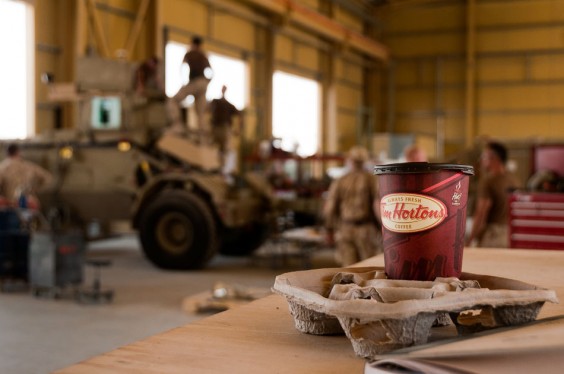 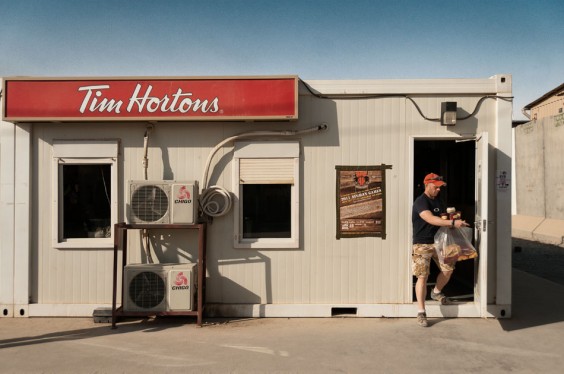 The Donut Run Juggle: The 30,000 deployed Canadian soldiers served at Afghanistan's only Tim Hortons, while impressive, pale next to the 2.5 million customers the chain estimates have visited it from the 47 ISAF contributor nations, with the donut shop becoming such a favourite on KAF that the Americans, who take control of Canada House in December, plan to replace it with a Dunkin' Donuts. The location was originally scheduled to close with the departure of combat troops in July but a fierce outcry from the incoming MTTF team prompted head office to keep it open until Christmas 2011. 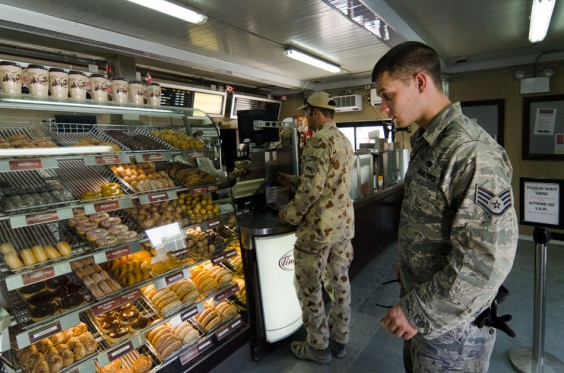 Sugar Envy: Since opening its doors on Canada Day in 2006, the KAF Tim Hortons has served 4,000,000 cups of coffee and 3,000,000 donuts. More than 300 sea containers of Tim Hortons products were shipped over five years from Kingston, ON. 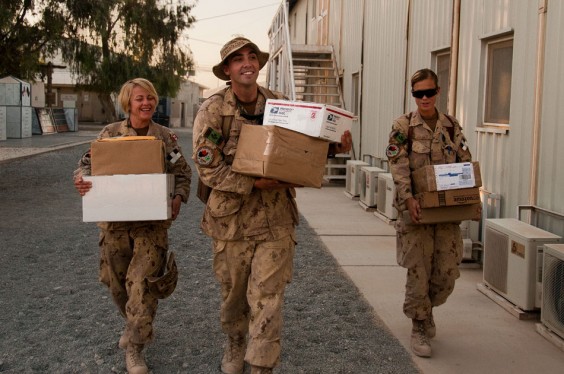 Delivery Day: Canadian Forces service members CAPT Magill, SGT Wade and MAJ Meszaros walk back to their residences with mail and packages sent from overseas. The USPS and Canada Post, among others, maintain branches at KAF. 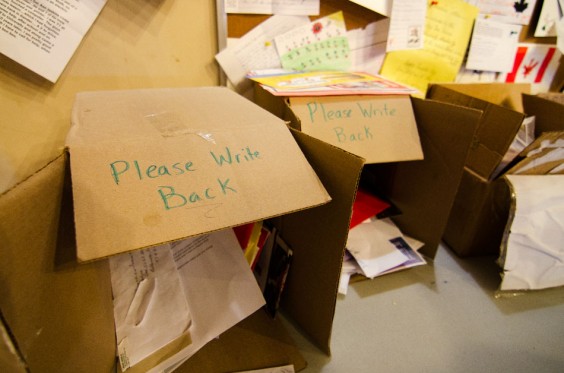 Off-Hours Activity: "Fan mail" sent to Canadian Forces members is made available at Canada House to read or reply to during off hours. 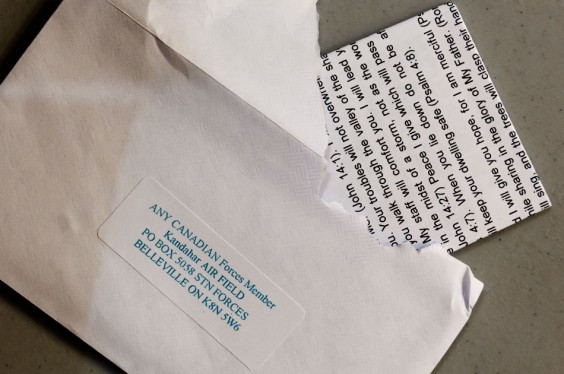 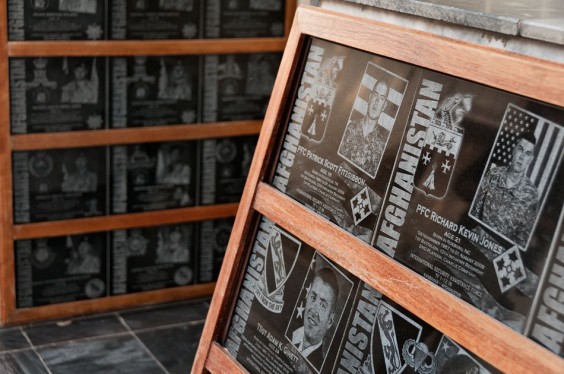 Slates, Former Lives: Outside the former Canadian HQ on KAF, a wood-and-granite cenotaph carries the names of every Canadian and international soldier killed on the Canadian combat mission. The monument will be repatriated to Ottawa after withdrawal. 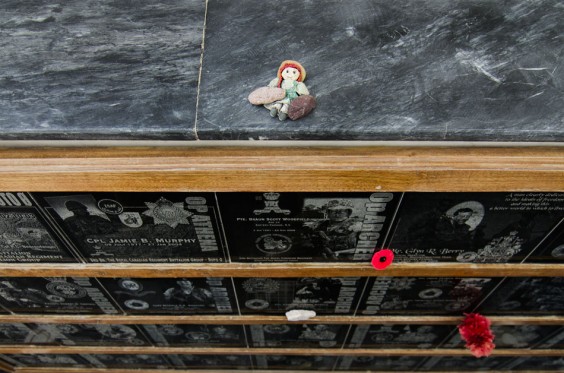 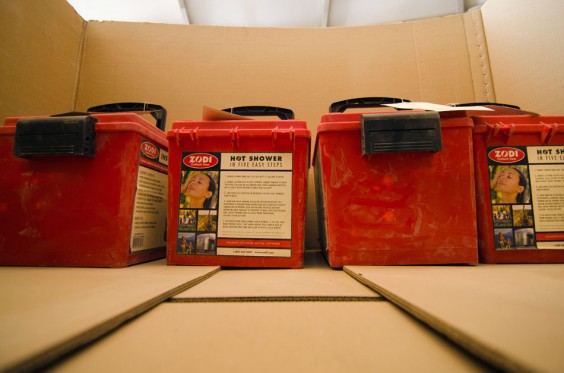 Red Box Comforts: Prior to shipping from Afghanistan, every item -- however insignificant -- is given a unique barcode with information about its history, destination and, if applicable, buyer. The British have been watching the Canadians closely in preparation for their own withdrawal from Afghanistan next year. 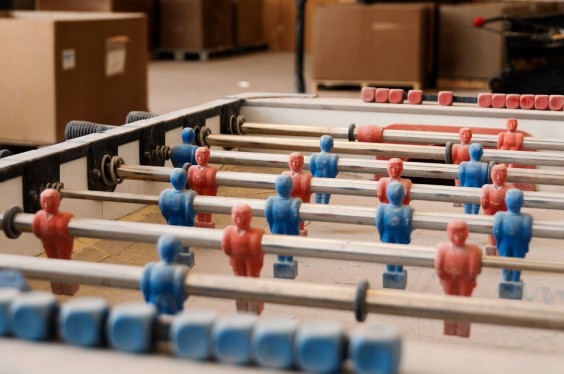 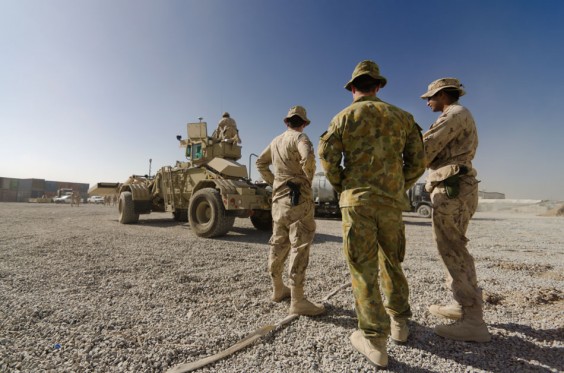 Husky Handover: With just a tenth of the military vehicles Canada used in Kandahar being redirected to Operation Attention in Kabul, buyers are being sought for the remainder. Here, Canadian (tan uniform) and Australian (green uniform) soldiers field test a Husky mine detection vehicle being transferred to the Australians for use in Uruzgan province.