Having only recently emerged from under the shadow of the army, the newly reactivated Afghan Air Force has a long way to go before it catches up with its brother and sister divisions in the country’s domestic security forces. Earlier this year when NATO first talked publicly about remaining in Afghanistan beyond 2014, it was the build-up of the three-year-old AAF that was cited as a main reason for extending the international military training mission, while the force’s small, defiantly non-regenerating cadre of qualified ground personnel, pilots and officers hint at deeper problems than the simple equipment shortages seen elsewhere before the holy grail of self-sufficiency can be reached.

Located adjacent to NATO’s main air base north of Kabul, the Pohantoon-e-Hawayee “air university” was reopened in 2008 as the AAF’s main flight school after two decades of mothballed neglect. Built by the Soviets and dubbed PeH by NATO trainers in a nod to the English acronym for a historically inaccurate English translation of its Dari name, the school is also the site of the main AAF operational base and was notably the hub for the Afghan air offensive during last month’s Kabul siege. We visited its flightline in late September. 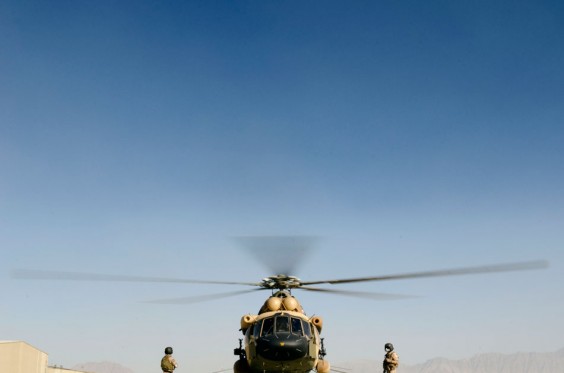 Brezhnev's Bird of War: Flanked by an Afghan pilot and his NATO trainer, a Soviet-designed Mi-17 revs to life. Unlike other departments in the resurgent Afghan National Security Forces, the AAF remains steeped in Russian heritage. Most aircraft are Soviet-designed; the curriculum at PeH closely mirrors similar flight schools in Russia; and, although this is beginning to change as new pilots graduate, the average age of an Afghan pilot, most of whom trained and flew under Soviet occupation, is 45. To compare, the average life expectancy for a male in Afghanistan is just 47. 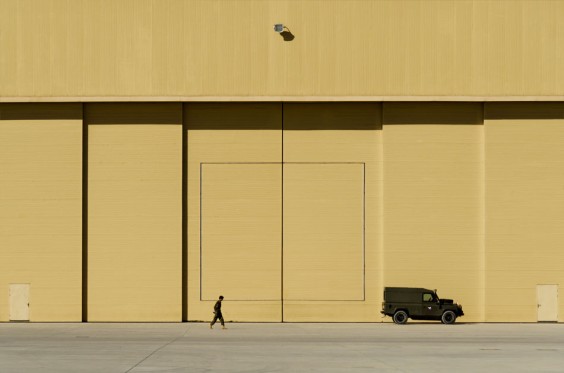 The Corrugated Sky: Dwarfed by a maintenance hangar, an AAF ground worker walks the flightline. 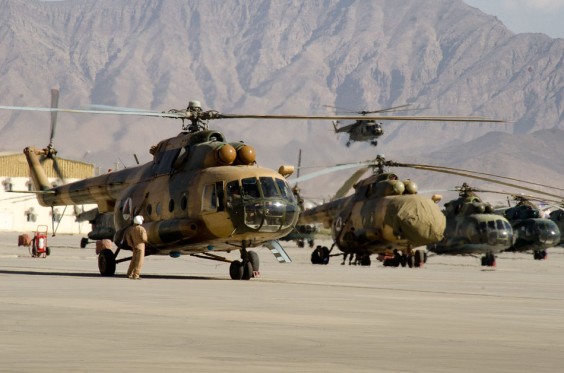 Airspace Tendrils: An Mi-17 helicopter returns from a routine training flight in the mountains between Kabul and Bagram Airfield. Last month AAF pilots set out on their highest-profile combat sortie yet when four Mi-17 and Mi-24 helicopters were sent to flush out insurgents holed up in a twelve storey skyscraper. 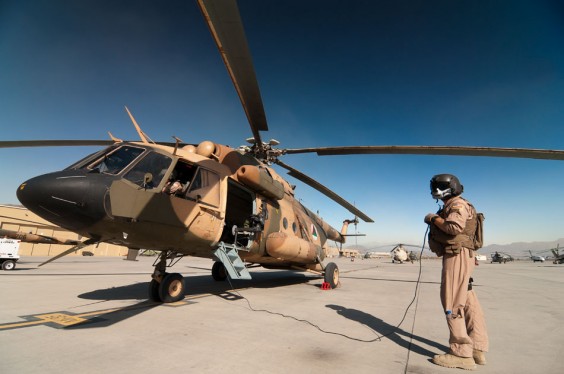 Man and His Machine: With large bases in Kandahar, Shindand and Kabul, a large push has been made in recent months toward top-down standardisation to prevent the air force from splintering into the three self-reliant entities that NATO advisors worryingly tell us have begun to emerge. 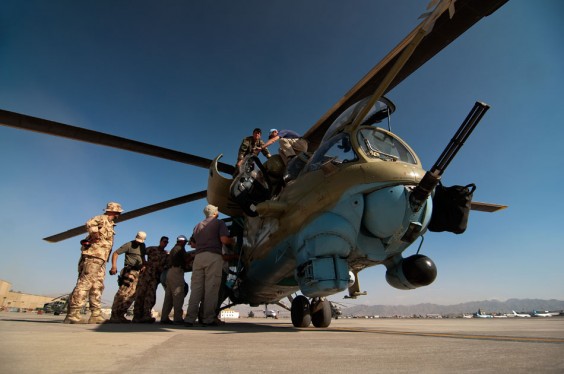 Turret Tongued: The AAF's nine Mi-24 helicopters form the backbone of its attack capability. Due both to operational costs and the difficult topography that serves as the country's battlefield, NATO planners tell us that no fighter jets or large transport carriers are likely to be purchased. 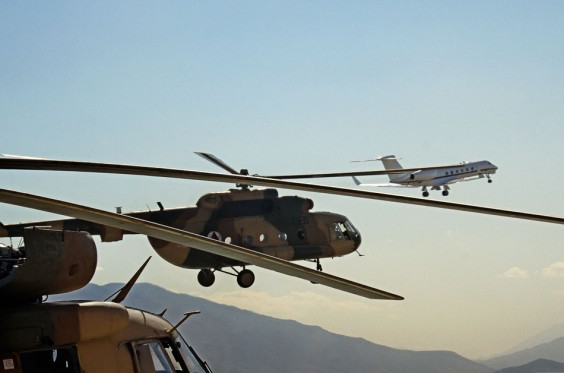 A Story of Rotors, Jets and Takeoff Speeds: The Afghan Air Force shares its runway not just with the NATO-led ISAF military base but with aircraft from Kabul's civilian airport too. Flying in or out of Kabul on a commercial flight, passengers will commonly have to queue on the tarmac behind everything from USAF Warthogs to French Mirage jet fighters. 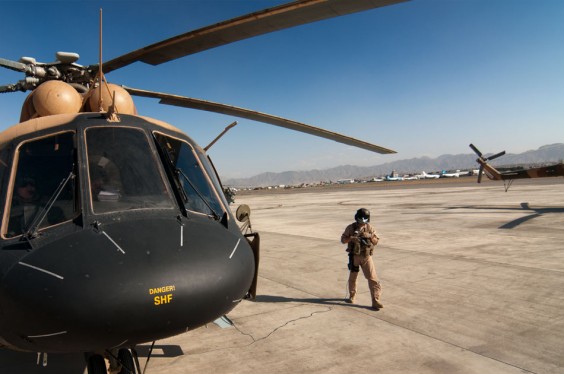 Wired: With the rest of the Mi-17's crew already inside, a NATO trainer checks over the helicopter prior to take off. 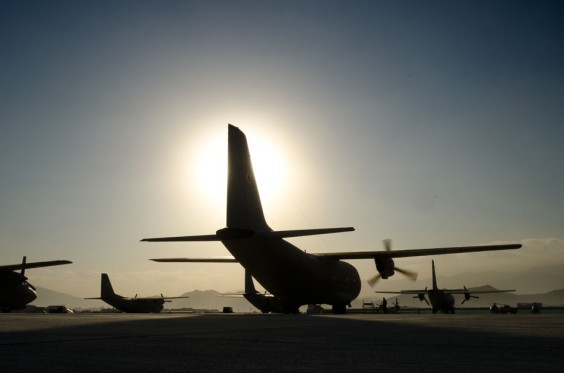 The Black-Skinned Birds: Arriving from Herat, a C-130 Hercules medical evacuation (medevac) flight powers down. Few on the ground know the severity of the injuries sustained by those onboard, and to be safe five ambulances have been called in to rush them to a nearby military hospital. 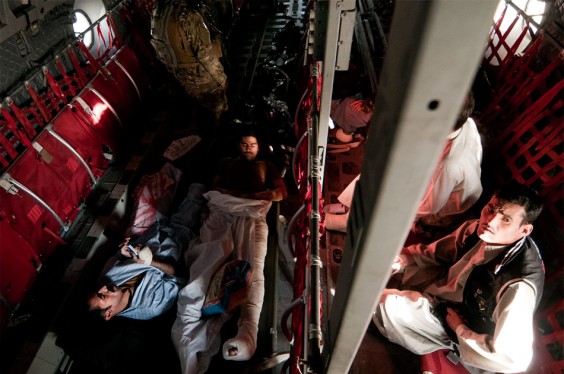 Immobile Cargo: As is the case too often in Afghanistan, many of those onboard were maimed in various IED (improvised explosive device) blasts. Those passengers well enough to make the journey received immediate medical care at the USAF-operated airfield in Herat and were stabilised before the two-and-a-half hour flight to Kabul. 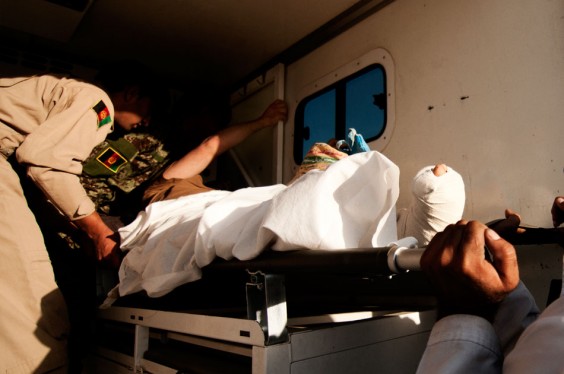 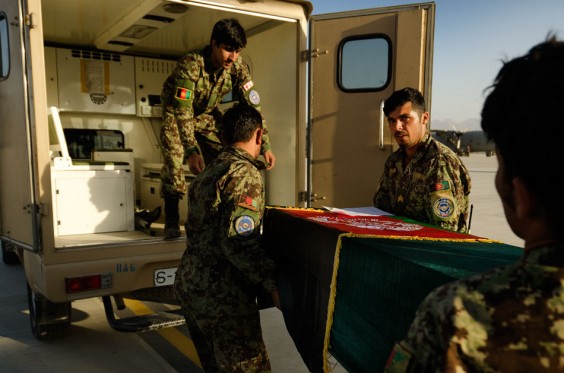 Spangled: Soldiers carry a coffin containing the body a man killed in an IED explosion in western Afghanistan. As with American and other coalition partners, the Afghan National Security Forces expressly forbids the publishing of names of the deceased until families have been notified. 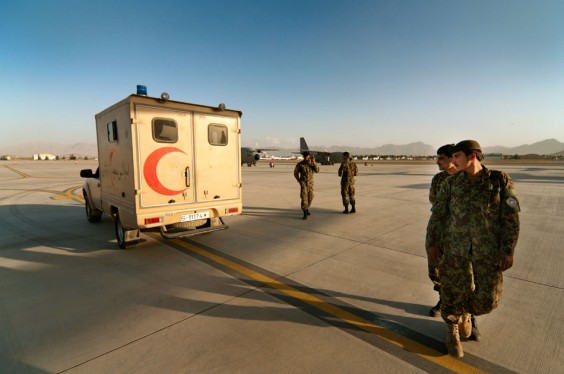 Crescent Departing: The International Red Crescent operates in place of the Red Cross in most of the world's Islamic nations. 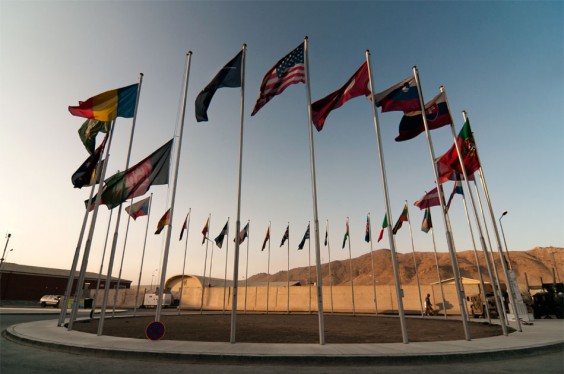 Lesser Heights: Surrounded by the colours of its coalition partners, the Afghan flag flies at half mast during the mourning period for slain ex-President Burhannudin Rabbani. The Afghan flag, we're told, spends much of its time at half mast.