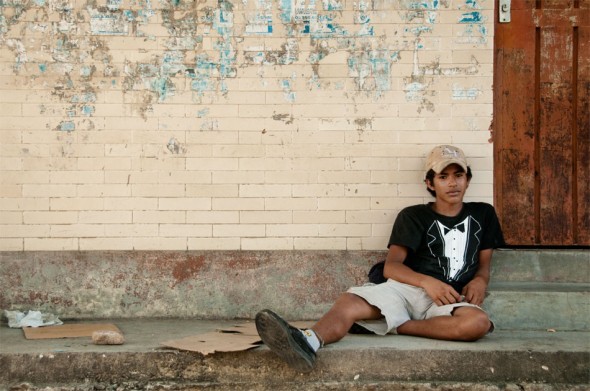 Anthems for a Seventeen-Year-Old Boy: Estuardo, on the morning we met him, sitting against a wall near the train tracks in Arriaga, Mexico.

Our coverage of Central American migrants in Arriaga—easily the best work we did in Mexico, not to mention the most popular and personally affecting—ended with a freight train snaking its way to the north as lightening lit up the sky to the south-west. Carrying between two and three hundred indocumentados, all heading to the US-Mexico border with the intention of crossing it to a better life, the train, I wrote at the time, would be taking “a direct route into a wholly uncertain future”.

Last week, we learned what that future held, and feel that it is only fair to those who followed the story so closely here, as well as to the migrants themselves, that we share that information. In short, many of the migrants we met and befriended three months ago have since become the very statistics we hoped they might avoid becoming.

Our suspicions that this might be the case were piqued while we were still in Mexico, when Austin’s mother, Lori, and friend, Will, both received calls from someone in Veracruz purporting to be speaking on behalf of Estuardo. The seventeen-year-old Guatemalan, whose experiences served as the emotional core of our coverage, had been given their phone numbers not long before the train was to leave town and told to call them once he reached the United States. The connection was bad and the man’s English rudimentary and by the time we had someone call him back he was gone. Worryingly, he had been calling from a payphone. Money was not mentioned in either call.

Another call was received last week. Andres, the softly spoken Honduran schoolteacher who aimed to make enough money to start a language school back home, rang Austin from Guadalajara to let him know that he was still alive. Many others, he said, were not.

The train was not long out of Arriaga when the violence began. At least three men—including one we had apparently spent quite a bit of time with—stood up and revealed themselves to be members of Los Zetas, the drug cartel offshoot that controls much of the southern migrant route and is well-known for its ostentatious displays of brutality. They started making demands of the passengers and threw the first one to refuse them from the train. Others, Andres said, began to leap from it in fear of what might happen to them if they remained onboard. A group of Guatemalans was abducted not long afterwards, with women and children among those taken.

Andres tracked down Estuardo in Ixtepec and stuck with him until Veracruz, where the younger, more vulnerable of the two was beaten and eventually deported. (Were the phone calls Lori and Will received being made by an immigration official? Why, then, was he calling from a payphone?) Andres said he suspected that Estuardo’s story about having a cousin in California, who had lined up work for him in a bakery, was false, fabricated to make us feel better about his chances of survival. It is true that, when we called the number Estuardo had given us for his cousin, we were told by the voice on the other end of the line that it was not connected and to try again.

Andres has thus far fared much better. From Veracruz, he made his way to Ciudad de México, where he worked for a man who helped him get an identification card, eventually earning enough money for an onward ticket to Guadalajara. He spent his first Christmas away from his family in that city and is currently working there to pay for the next leg of his journey. His sister, who had been told by their mother that he had gone south to Panama in search of teaching work, learned the truth on Christmas Day.

Three months after we last saw him, Andres now hopes to make enough money to be able to continue onward to Nuevo Laredo, where he claims to have a contact who will organise safe passage across the border in exchange for two or three weeks of work. While Andres claims to be optimistic about his chances, Austin said the fear in his voice suggested otherwise. Andres said he has seen men killed and women raped and that he sees them all again when he lies down to sleep at night. He promised to call Austin again before he departs for el norte.

While Andres was always very nervous about his trip, Austin and I were never too worried about his chances. With his solid build and impeccable language skills, we always suspected that criminal gangs would target more vulnerable-looking targets than him, and that he would be able to talk his way out of any run-ins with corrupt officials. Estuardo was a different matter and the news of his deportation came as a terrible, but not entirely surprising, blow. In the days following it, I often found myself reflecting, with a sense of bitter irony, on one of his favourite pastimes in the week we got to know one another. Lying against a wall in the shade, Austin’s iPod earphones in, Estuardo would begin to sing, in a language he didn’t understand, words encapsulating the nascent hope that was driving him and his fellow travellers north. Gorillaz’s Clint Eastwood, it turned out, happened to be one of his favourite songs: