Viewing: Home › Between Two Anniversaries › The Other Train

You know how it is there early in the morning in Los Mochis when the train pulls out of the station past the goats and the chickens and the small gardens of agave and you wonder whether it will ever pick up speed before it eventually does and you start going at a clip with the wind. That sensation of travelling from Arizona to Colorado with each metre of increased altitude adding another pine or another fir while taking away another cactus and the cut-away cliff faces, square brush-strokes on the landscape, that remind you once again that Arthur Streeton really knew his rocks. And you know how it is there in the longer tunnels when you hang your body out the window in the dark and breathe in the air that is cold and cutting and coming by fast and how it is when the pink of the twilight atmosphere gives way to its manifold blues and the moon. The only reminder you have that the trip is sixteen hours long is the pain you feel in your legs from standing all day, but then who in their right mind would choose to sit at a window when they can stand and stick their heads and hands out into the country, trying to grab at the whip-like branches of the passing trees and hurting their hands whenever they manage it? You know how it is looking out across the pitch black plains of a border state long after twilight has given way to the night, the landscape like one of Rothko’s chapel paintings, the eye struggling to make any real distinction between the black of the sky and the slightly blacker black of the earth. It is a feeling of excitement, inevitability and dread and you have been feeling it for months now but are suddenly overwhelmed by it. You know how it is to be counting down the hours. Tomorrow you will be in the murder capital of the world. 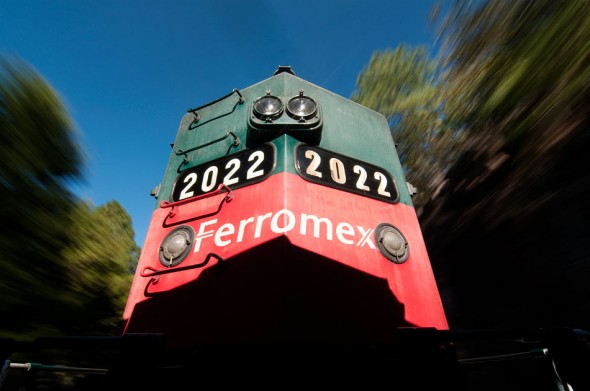 Through the Sierra Tarahumara: El Ferrocarril Chihuahua al Pacífico—El Chepe, as the train is more commonly and affectionately known—tears through the Sierra Madre Occidental's south-western section, the Sierra Tarahumara, in the northern Mexican state of Chihuahua. Six hundred and twenty-eight kilometres long, the world-famous railway took almost ninety years and ninety million dollars to complete, and was designed to connect the Pacific Ocean with Mexico's central desert territory. 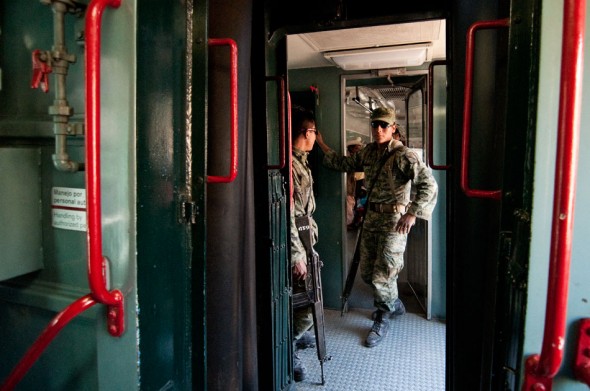 Packing Heat: Soldiers—one of the most ubiquitous and visible groups in Mexico, not to mention in the drug-wracked north—stand at ease between two carriages. Occasionally, the train will stop and let them off to investigate something or other on the side of the tracks, but mostly they confine themselves to their seats or the cafeteria car. (One even spends a good twenty minutes flirting with two girls ordering coffee.) 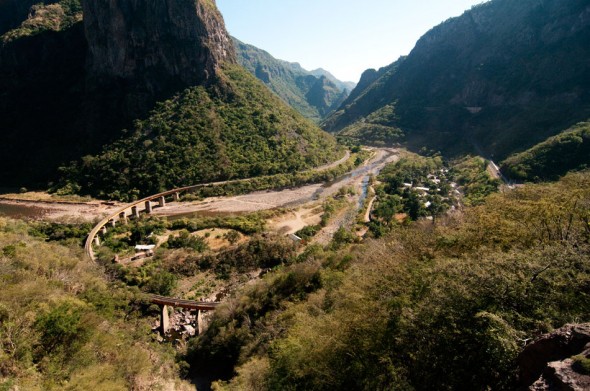 A Loop at Altitude: El Chepe passes through some of Mexico's most rugged and beautiful terrain, hugging cliff-faces, crossing ravines, and winding around, ever so slowly, up through the mountains from sea level to an altitude of some two-and-a-half thousand metres. 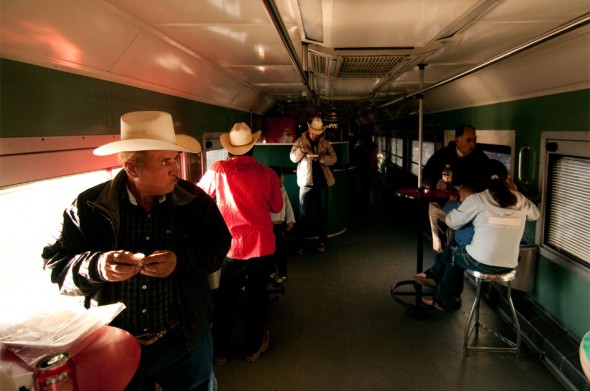 Cowboys in the Cafeteria Car: From the moment it opens at around eight in the morning, the cafeteria car is full of life. Unlike the first-class service, which caters to foreign tourists and boasts a proper dining car, the economy service stocks little more than snacks and coffee. It also takes a little longer to reach its final destination: while the first-class service stops only at tourist attractions, the economy service stops at all stations along the route, picking up and dropping off those who live in the mountains. 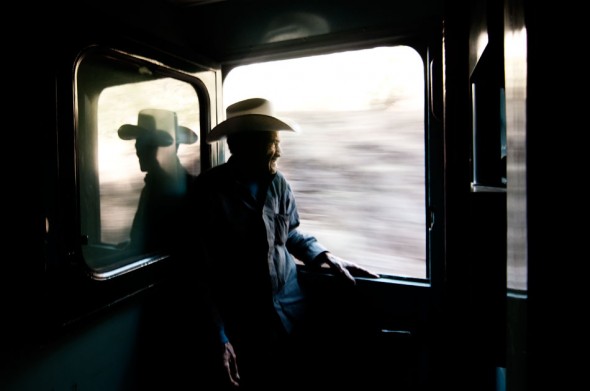 At a Clip with the Wind: An elderly man—one of the most intense and impressive cigarette smokers we have ever seen—stands at the window between two carriages while a cliff-face blurs behind him as he passes. 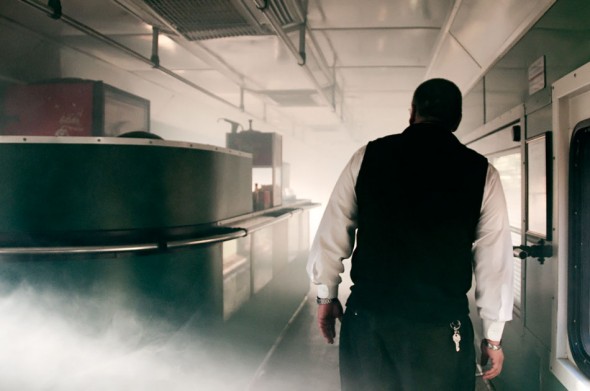 A Failed Generator: Sometime in the afternoon, the cafeteria runs out of power. ("Come back in an hour," Austin is told when he goes to order a pizza snack. "Come back in another hour," he is told when he comes back after sixty minutes.) Unable to heat food or boil water for coffee, the woman behind the counter sends for a generator. The moment she tries to use it to power a microwave, however, the thing begins to haemorrhage smoke: we help prop open the windows using a couple of nearby milk crates and are then ushered out and kindly asked to not to take photos or breathe the smoke in. 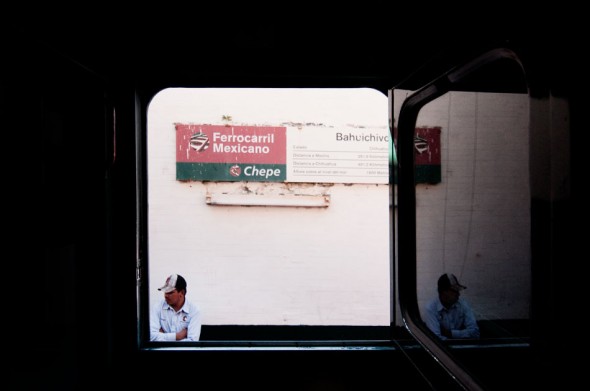 Reflection: A man sits on the platform in Bahuichivo, Chihuahua, at an elevation of around sixteen hundred metres. 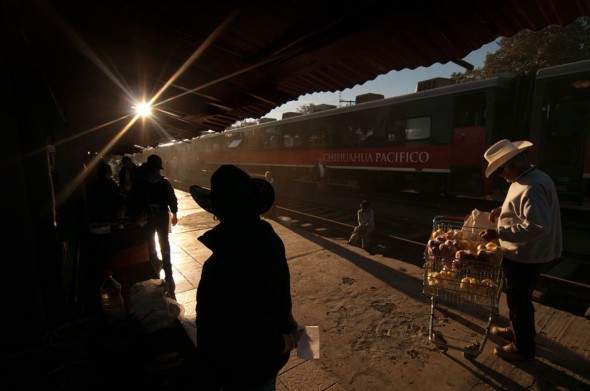 Servicing the Canyon: Food stalls line the railway platform at Divisadero, the only village on the line where the train stops for more than three or four minutes. It does so to allow its passengers the opportunity to see the remarkable Barranca del Cobre, or Copper Canyon, up close, though the opportunity to eat some proper food is for many as good a reason as any. 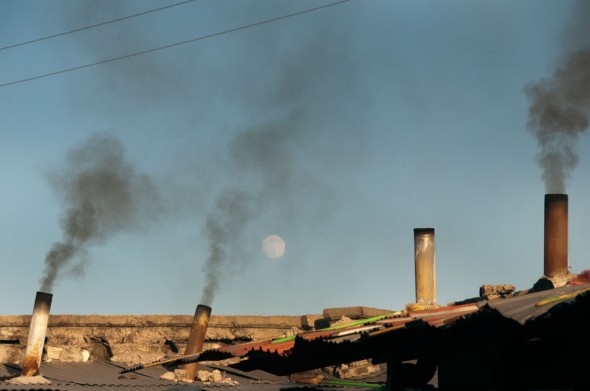 A Moon Rises Over Smokestacks: The moon makes its first appearance above Divisadero at around five o'clock in the afternoon, appearing above the canyon through the smoke from the various homes and comedors. Divisadero is perched above Canyon Urique, the largest of the six canyons that comprise the Barranca del Cobre. 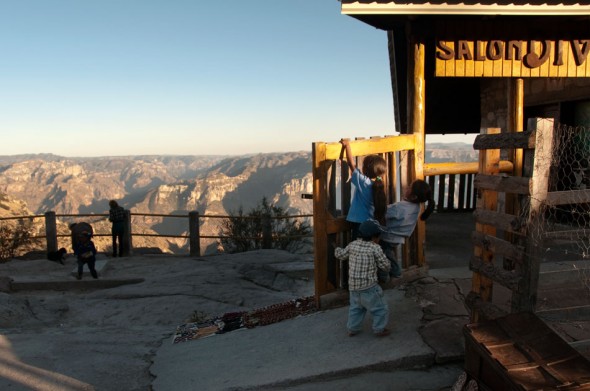 The Precipice: Children play near the edge of Canyon Urique as tourists photograph it from its edge. Barranca del Cobre is ultimately both larger and, in some places, deeper than Arizona's Grand Canyon, though its relative inaccessibility to all but the most ardent hikers makes it a good deal more difficult to get a good look at. 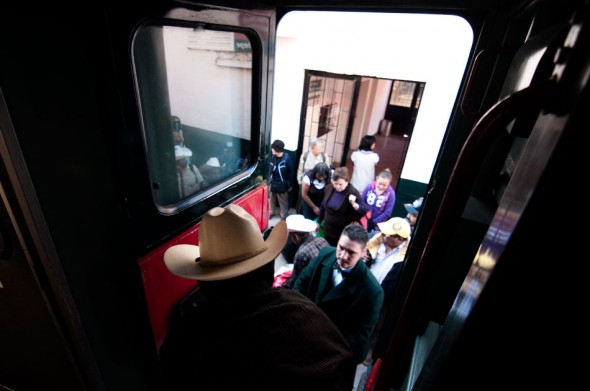 An Influx Before the Descent: A large group boards the train at Creel, the last stop before the train leaves the mountains and starts snaking its way across the desert. 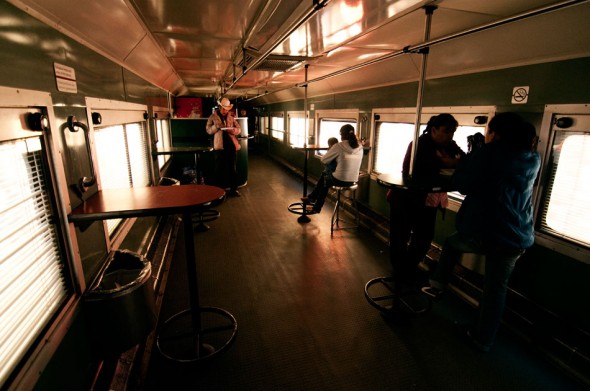 Blown-Out and Slowly Emptying: With the late afternoon sun lighting up the cafeteria car windows, the last call for coffees and snacks is issued and people begin making their way back to their seats. Many have been on the train since it left Los Mochis at seven o'clock in the morning. At seven o'clock in the evening, they still have one third of the trip to go. 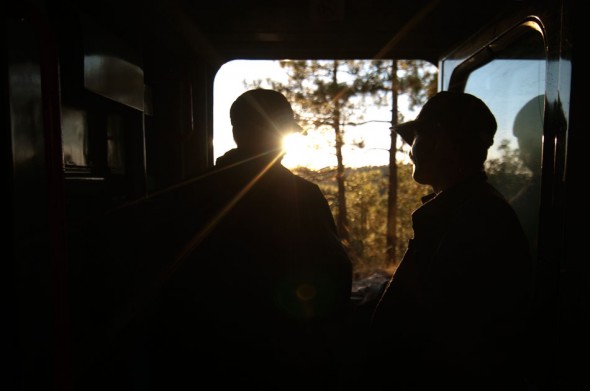 The Final Climb: As the sun begins to set over the mountains, El Chepe begins its final climb, running along through the forest on top of the range, preparing itself for its rapid descent to the flat and endless desert over a thousand metres below.