Mexico becomes a little stranger as one heads towards its northern border. Tourists disappear from the buses, which are forced to stop more regularly so that military personnel can search through everyone’s luggage. (The drug war, like the war on terror, is first and foremost a war on travellers.) What one has come to appreciate as a loud and vibrant country quickly becomes, over the course of one overnight bus ride, weirdly muted and airless as one approaches its bloody frontier. One has felt more isolated on one’s travels: standing at the tip of Baja California Sur or looking out over the endless canopy-sea of the Calakmul Biosphere Reserve are experiences that leave one feeling much farther away from civilisation than driving through the desert does. But as one waits in line to have a solider rifle through one’s belongings, looking out across the dirty expanse in the general direction of Arizona, shivering in the early morning cool and thinking about the blood these sands have soaked up over the past hundred years, one certainly feels more explicitly alone than anywhere else in the country. As for Ciudad Juárez—for months a phantasm, now tangible and real—it, too, rather feels as though it is holding its breath. Love their city though the locals might, there is no denying the tension in the air. It doesn’t take one long to realise that this has as much to do with the presence of the military as it does with the daily butchery of the cartels: on every street, a black, gun-mounted humvee or a foot patrol in aviators and fatigues—outsiders with their own record of atrocity in these parts—serve to to remind those who live here that their city is not their own. Grisly images in the daily newspaper—where freshly decapitated bodies rub shoulders with centrefold models draped in ammunition belts—serve to remind them the the guns and patrols have done little to stem the carnage in their streets. Caught between two sets of cross-hairs, Juárenses are living, not only under siege, but also under occupation. 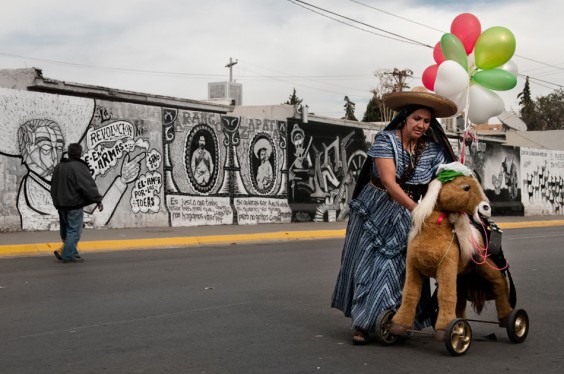 The Murals of Mexico: Juárez locals go about their business in front of a series of black and white murals that were commissioned by the city council to commemorate the Centenary of Revolution. Our last full day in Mexico was November 20, one hundred years to the day since the revolution began, and the city was celebrating accordingly. Juárez played an important role in the struggle: the capture of the city by Pascual Orozco and Francisco "Pancho" Villa in May 1911 led to the signing of the Treaty of Ciudad Juárez and helped to end the initial stage of the revolution. Villa's last significant military action was a raid on the city in 1919. 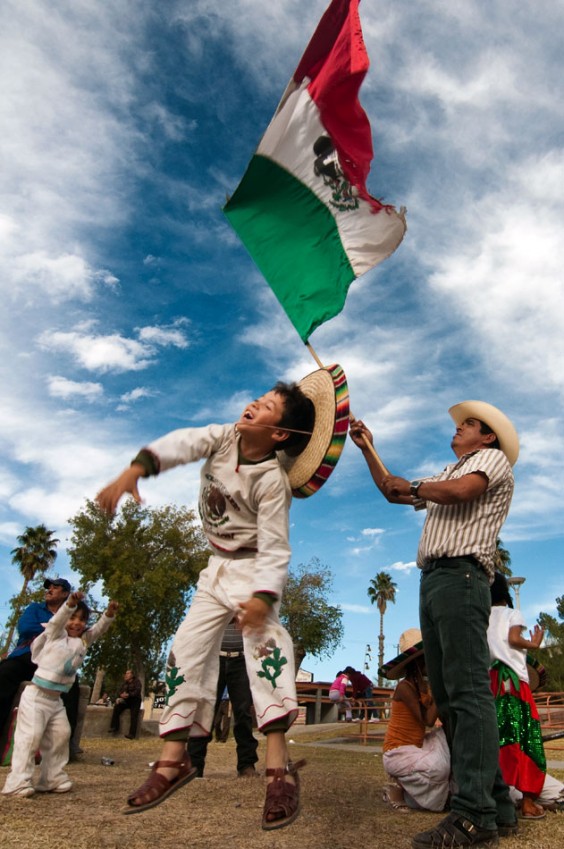 Bordertown Innocents: Dressed for Centenary celebrations, which included a street parade and a concert at Plaza Benito Juárez, a boy leaps into the air while his father waves a flag behind him. Police and military personnel attended both events in great numbers: while snipers took to rooftops along the parade route, mounted police traced endless circles around the plaza's perimeter. 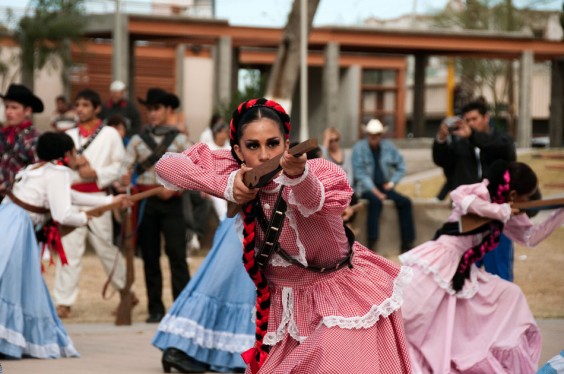 Las Mujeres de Juárez: A group of women in traditional dress perform as part of the November 20 celebrations. Female soldiers, or soldaderas, played an active role in a number of revolutionary battles; the figure of La Adelita, the potentially apocryphal soldadera who fell in love with a sergeant and fought along side him, is a central component of the country's revolutionary iconography. A central component of Juárez's own own iconography is somewhat less appealing: las muertas de Juárez, the victims of femicide, whose numbers have, over the past eighteen years, climbed to anywhere between four hundred and five thousand. 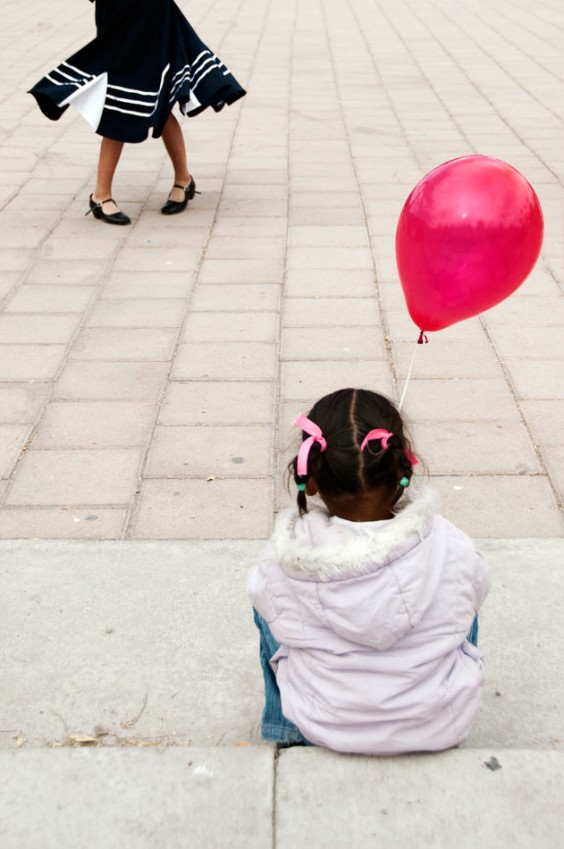 The Red Balloon: A little girl, the colours of the flag in her hair, watches traditional dancing in the plaza. 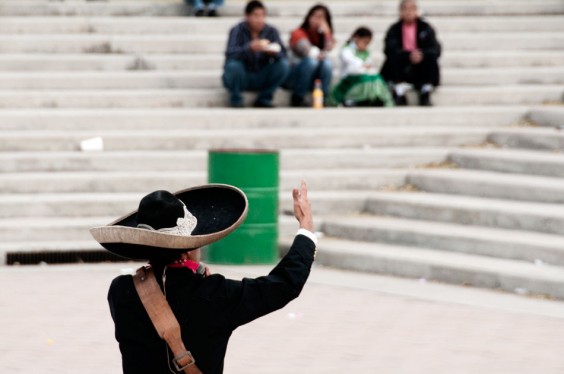 Serenading the Stalls: According to reports, locals showed up for Centenary of Revolution events in far greater numbers than they did for Bicentenary of Independence celebrations earlier in the year, many of which were cancelled due to fear of potential cartel violence. "Well-attended," it seems fair to say, means something a little different in Juárez: here, a mariachi croons to a few sparsely-seated audience members, including a little girl whose costume suggests that she is a fellow performer. 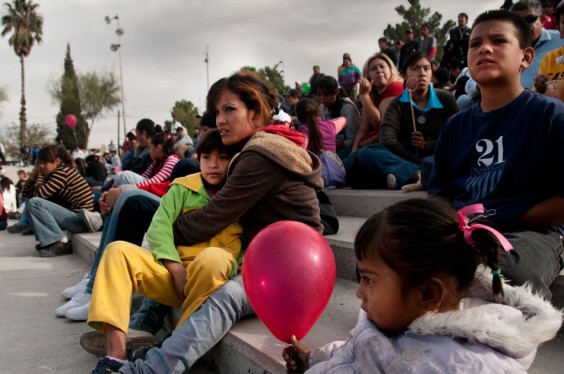 The Turnout: The Juárenses who did attend, however, were more than happy to do so: they did not "brave the streets despite their fears," as the international media would doubtless have put it, but rather showed genuine excitement about the celebrations. As Nelia, one of the event’s organisers, told us: "I refuse to be afraid of my own city." 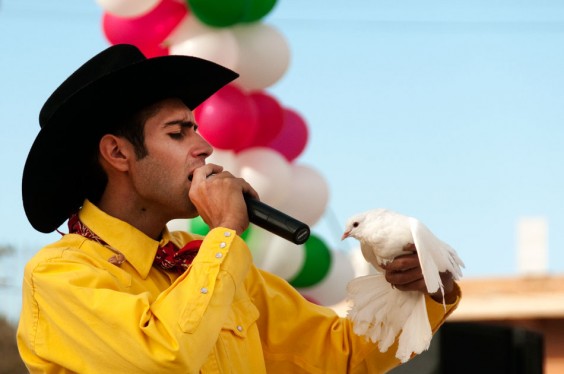 Readily Apparent Symbolism: The concert's headline act, dressed in the standard-issue cowboy outfit ubiquitous on both sides of the border, croons to a dove. 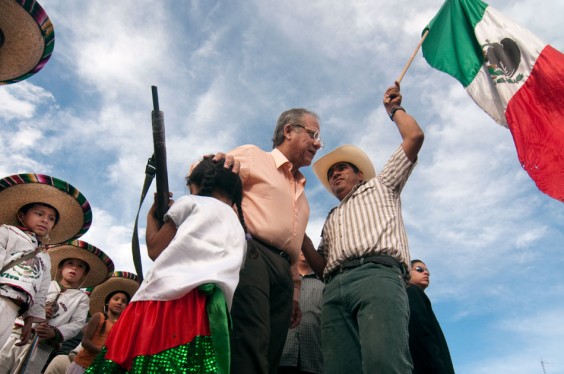 The Man of the Hour: Ciudad Juárez's mayor, Héctor Murguía, walks amongst the crowd. Murguía, who served as mayor between 2004 and 2007, was sworn in again on October 10, 2010, at the beginning of what would become the bloodiest month in the city’s history. 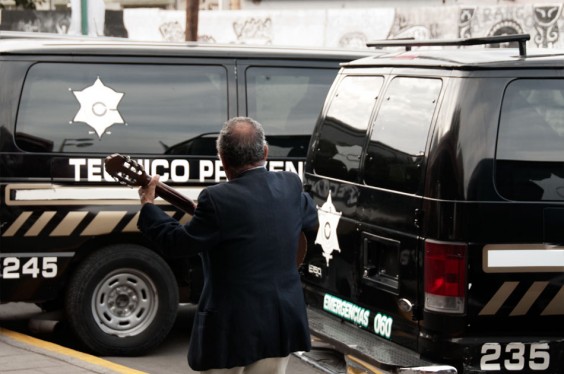 Tinted Windows and a Musician: Having faithfully executed his role in the proceedings, a guitarist wanders away from the plaza past a number of federal police vehicles. 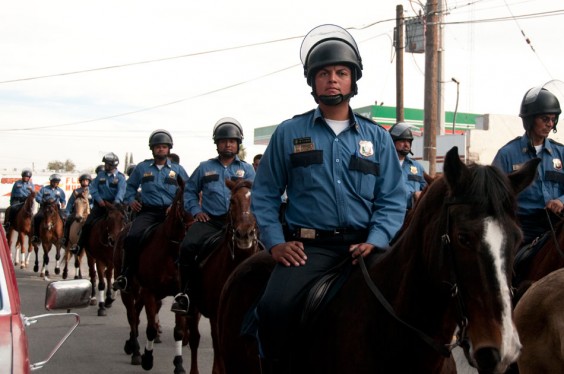 Saddled Security: A column of mounted police officers monitors the perimeter of the plaza. 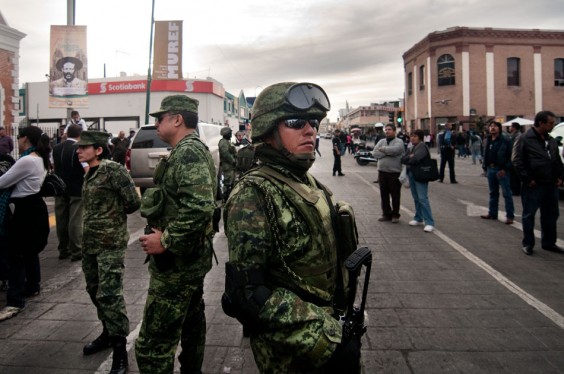 Outsiders: Military personnel stand guard as municipal and state politicians speak at the new Museo de la Revolución en la Frontera, which was inaugurated two days earlier and is housed in the city's former customs building. Following President Felipe Calderón’s declaration of war on the cartels in December 2006, police and military numbers along the northern border have exploded into the tens of thousands. 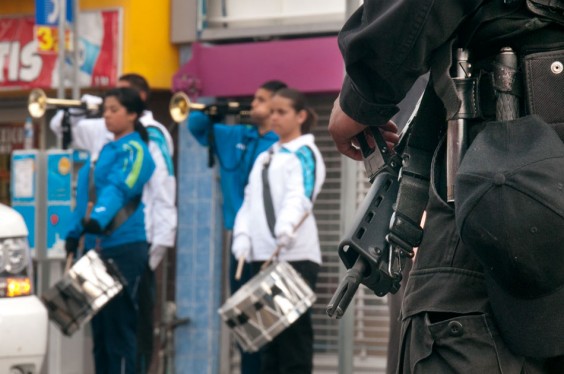 Blow, Gabriel, Blow: Local students form a drum and bugle corps outside the museum as a federal police officer looks on. According to a report released by the Washington Office on Latin America in November, a number of police and military personnel have been accused of human rights violations against citizens, with over four thousand reports of rape, robbery, forced disappearance and extrajudicial killings over the past four years. 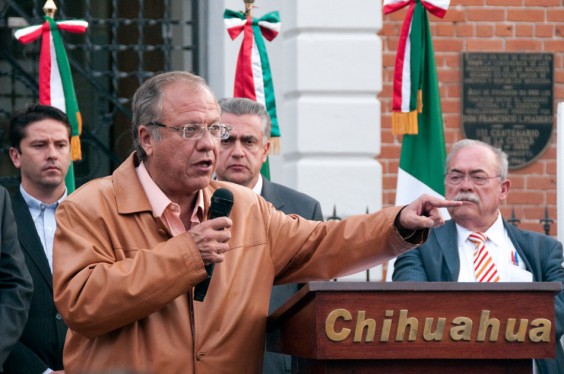 Not Your Average Lapdog: Murguía speaks outside el Museo de la Revolución en la Frontera. The mayor's speeches tend to emphasise the importance of economic development over the president's increasingly unpopular military approach to the cartels, while also insisting upon the responsibility of the US to curb the demand for drugs that drives the trade. Although popular, however, the mayor has previously been accused of having links to drug traffickers himself. Four hundred of the city's police officers had to be fired following his first reign as mayor, after they failed confidence exams consisting of drug and polygraph tests. 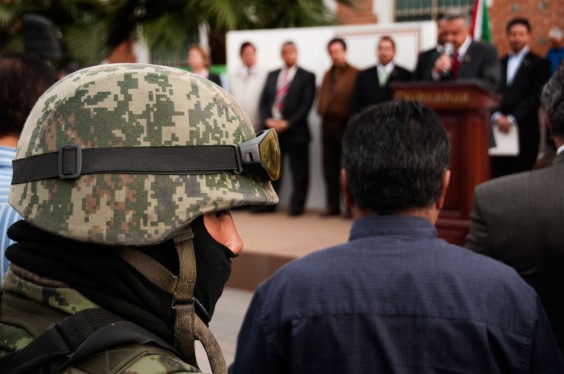 Standard-Issue Balaclava: An anonymous soldier stares into the middle distance as one of the visiting dignitaries pontificates at the podium. 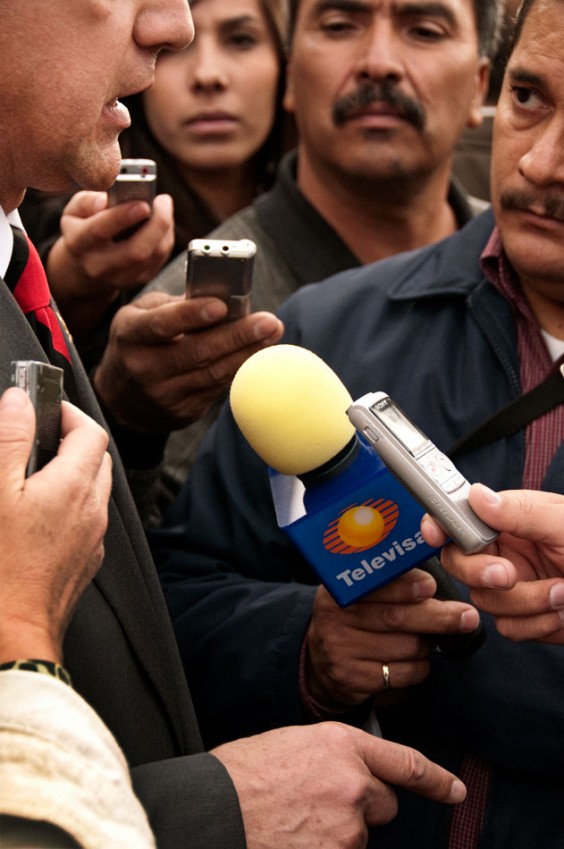 On the Record: Mexico is one of the most dangerous countries in the world for journalists. Twenty-two media workers, including photographers, have been murdered in the country since Calderón took office, at least eight in direct reprisal for reporting on crime and corruption. On September 16, the day after the country celebrated its Bicentenary of Independence, a photographer from the city’s main newspaper, El Diario, was gunned down on his lunch break, prompting the paper's editorial staff to write an unprecedented open letter to the city’s cartels headlined: “What do you want from us?”

Just Another Day in the Murder Capital of the World: Police officers arrest two men at Plaza Benito Juárez. By six o'clock in the evening, the streets are completely empty. As I wrote in a newspaper article at the time: "Juárenses may love their city in spite of the bloodshed it has seen, but it is precisely because of that bloodshed that they know better than to be outside after dark."