Our first meal back in the United States was low-grade El Paso Italian and Budweiser. We weren’t much interested in tracking down tacos. The first thing you notice upon eating Mexican food on its home soil is how its bastardised foreign variants—Californian Mexican, New Mexican and Tex-Mex—pale in comparison to the real thing. We weren’t about to celebrate our trip with a gastronomical regression. Indeed, it ultimately took me about two months to bring myself to try them again. Even then, I had to be strong-armed into it.  Because, even now, I can still remember the best meals we ate in the country: the Baja-style seafood on Avenida San Antonio in Ciudad de México; the tacos flautas at a hole-in-the-wall on the same avenue, around the corner from our friend’s apartment; the chorizo and res tacos de asador on Arriaga’s zócalo, which we shared with the indocumentados; the tortas ahogada in Dolores Hidalgo, which we discovered entirely by accident; our breakfast place in San Cristobal de las Casas; and the Uruguayan steakhouses in Ciudad de México and Chetumal, which weren’t technically Mexican places, but so what? We have already extensively covered the culinary wonderland that is Oaxaca, where mole, mescal and other-worldly chocolate are staples, and where we ate the best churros either of us had ever had after buying it fresh from a woman on a footbridge. Looking back over these photos now—not to mention those photos, not published here, which show my gut growing over time at least as much as my beard—I am reminded of just how much we ate: food was at as ever-present in our minds as politics and history and, indeed, in many cases, was indivisible from the latter. If nothing else, a scent has been added to that great and mysterious store of which, as Proust famously wrote, “bear unfaltering, in the tiny and almost impalpable drop of their essence, the vast structure of recollection”: I may never smell a proper corn tortilla again without being transported to that first morning in Ciudad de México, tired and dishevelled after a twenty-hour bus ride, when we first passed the tortilleria between la estación de metro Etiopía and our friend’s apartment on Calle Palenque, and the trip still lay before us like an impossible and nerve-wracking dream. I will never buy Old El Paso taco shells—let alone free-standing ones—for as long as I shall live. 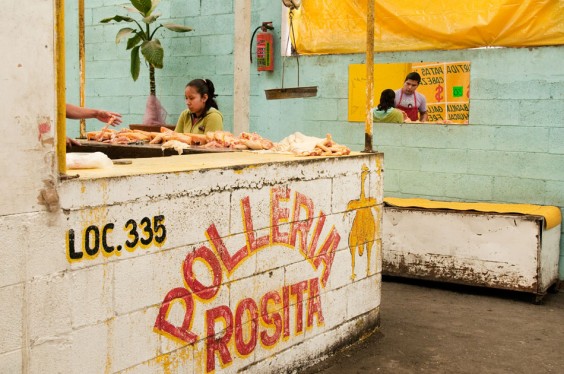 Bright-Yellow Birds: After attending mass at Ciudad de México's Basílica de Nuestra Señora de Guadalupe, Austin and I went exploring the nearby mercados. Here, at a polleria, or poultry shop ("rosita" means "pink", though clearly "amarillo" might have been a more accurate description), a vendor weighs out pieces of chicken for his customer. 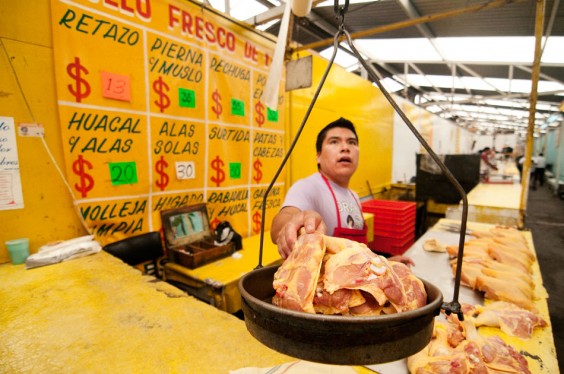 A Plethora of Poultry's Unnameable Parts: One of the pleasures of ordering meat in Mexico is that you never quite know what you're going to get. Unlike in the West, where we traditionally waste most of our animals in favour of their most delectable parts, Mexicans are more completist in their tastes. The result is that every restaurant and market stall offers more parts from a single animal than most Western butchers offer from five or six. (The signs you can read in this photo advertise the wings and carcass, the wings on their own, chicken stock, legs and heads, and gizzards.) 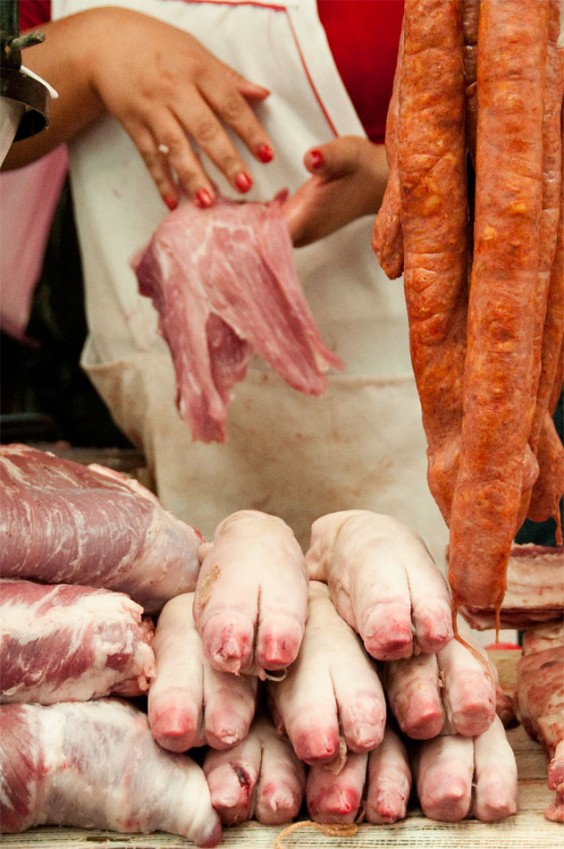 Manicure: At the same Ciudad de México market, a vendor caresses a piece of cerdo, or pork, behind her wares. These include chorizo sausages and—another example of head-to-tale eating—a pile of trotters. 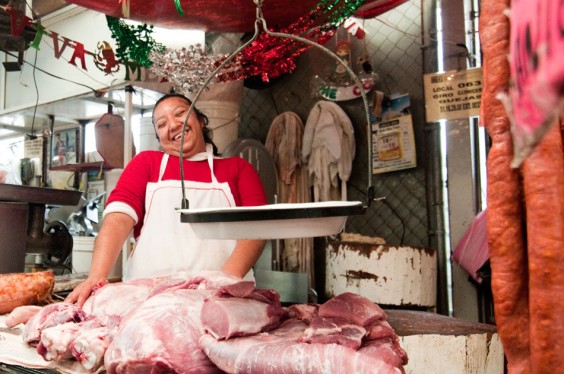 The Carnicero's Cackle: The cerdo vendor, amused to see two gringos in one of Ciudad de México's more dangerous and unpredictable barrios, laughs at the photographer's inexplicable interest in her. 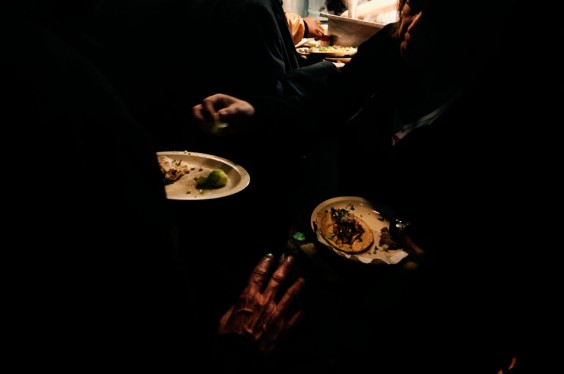 Limes at Midnight: Not long after Felipe Calderón's eleven o'clock grito in Ciudad de México's zócalo, which marked Mexico's Bicentenary of Independence, two revellers share a couple of tacos de asador ("spit" or "grill" tacos) on the street. Consisting of a maize or wheat tortilla wrapped around a given filling (the maize, or corn, tortillas are the ones that change your life), the taco pre-dates the arrival of Europeans in the Americas. 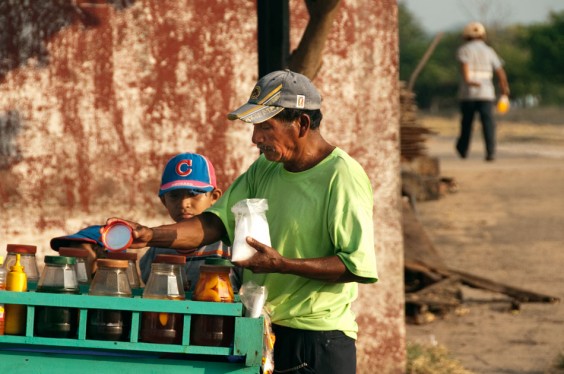 Aguas y Jugos: A water and juice vendor operates out of his cart in Arriaga, Chiapas, where locals and indocumentados alike serve as his clientele. Of the various water-based drinks on offer, Austin and I tended to favour horchata, a beverage flavoured with ground rice, vanilla and cinnamon. 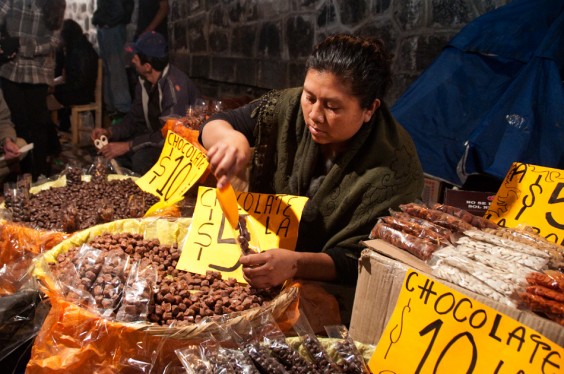 Dainties for the Dead: A vendor in Mixquic, D.F., measures out a serve of chocolate pieces on the eve of Día de los Muertos. While the best chocolate we ate in Mexico came from Oaxaca, where it is crystalline, spicy and intensely fragrant, Mixquic's residents, too, think very highly of their product. In addition to cigars and tequila, chocolate, too, is considered a worthy offering to the souls of the dead. 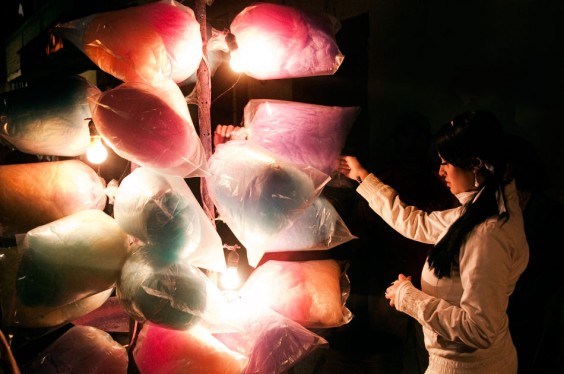 Tree of Light and Sugar: A Mixquic teenager considers her options on the eve of Día de los Muertos.

It has been six months since Austin and I navigated our way through the bottleneck of traffic at the mouth of Ciudad Juárez’s Paso del Norte International Bridge and, turning down a barrage of hawkers for the last time, crossed the Río Grande to the United States. (The Mexicans in the queue helpfully insisted that there was a separate line for Americans and expressed their condolences when we showed them our Canadian and Australian passports.) It has taken us a rather long time to get the rest of the photos from our trip online: Austin returned to Vancouver, and to work, the day after we left the country; and, while it took me somewhat longer to find gainful employment, my time has been taken up with a number of creative endeavours. We are already planning future projects, together and individually, which we hope to detail here. In 2012, I will be covering Russia’s presidential election, and potentially the Fiesta de San Fermín in Pamplona. (It would be a shame to let my Spanish fall by the wayside.) Austin has a number of film projects on the boil. Before too long, we hope to be bringing you words and images from the Arctic Circle—possibly in the form of documentary series—as well as from Tanzania and the Democratic Republic of Congo. For the time being, we are focusing on transforming our coverage of Mexico into a book, Blood Still Drips: A Mexican Journal, and on developing this website as a modest hub of not-so-modest commentary. We would not be doing either of these things without the financial contributions of a number of people: Laeia Angelica, Shamere Borg, Chris Bowyer, Gillian Clayfield, Mark Colvin, Melanie Cook, Mark Daley, Hayley Dinnison, Juliet Fries, Alicia Fuhrman, Sophie Gleitzman, Anna Jolly, Jeonghyun Kim, Klim Levene, Karen Miley, Mathieu Ravier, Hillary Ray, Milforde Rose, Jonathan Schmidtgall, Lori Shyba, Trevor Smith and Kerin O’Reilly, Adam Sturtevant, Nathalie Swainston, Rodrigo Urbano, and Maarinke Van Der Meulen. To these much too generous souls, and to those of you who have followed our work dutifully over the course of the past nine months, Austin and I offer our heartfelt thanks. Gracias, y buena suerte. 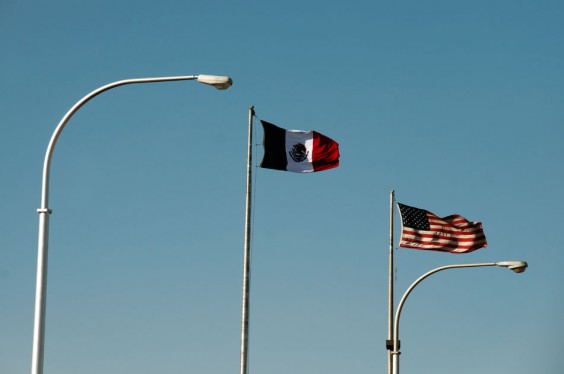 The Eagle, the Snake, and Ol' Glory: The Mexican and US flags fly above Ciudad Juárez's Paso del Norte International Bridge. Also known as the "Santa Fe Street Bridge", "Puente Benito Juárez", "Puente Paso del Norte" and "Puente Juárez-Santa Fe", the bridge was constructed in 1967. In April this year, a man was wounded in a shooting on the Mexican side of the bridge. 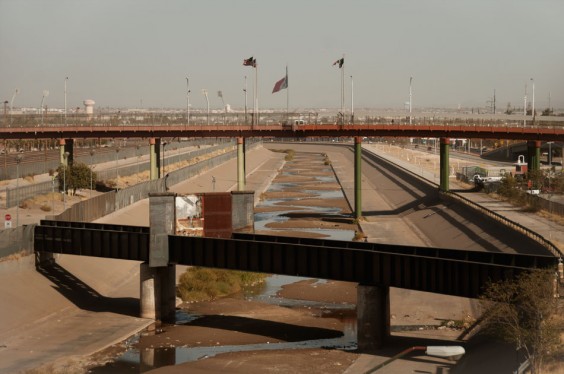 El Río No-Muy-Grande: The natural border between Mexico and the United States since the Mexican-American War of 1848, the Río Grande has been reduced to a pathetic trickle by farms and cities on both its shores. This has had grave effects on the ecosystems of both northern Mexico and southern Texas, especially at the river's mouth, on the Gulf of Mexico. 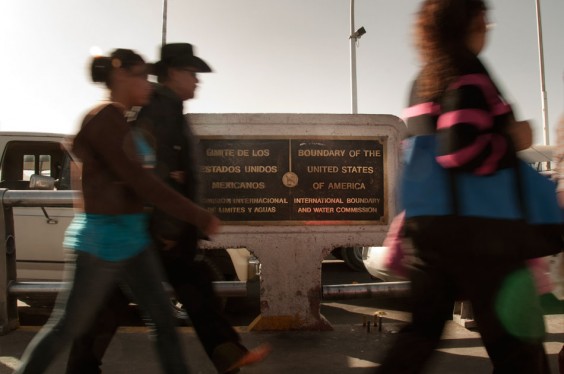 Adios: Austin straddles two countries. I am already in the United States.