Viewing: Home › Between Two Anniversaries › Drug War I: A Tapestry of Murder

“¿Perodistas?” The old woman enunciates the word with caution. “No,” Tomás, our cab driver, reassures her. “Son turistas.” She relaxes visibly. The sight of Austin taking photos of the house across the street—an abandoned shell riddled with bullets and charred—had clearly frightened her. The last thing anyone in this part of Mazatlán needs is media attention: regardless of whether they speak to the press or not, stories about shootings in these drug-addled barrios are liable to get the neighbours shot as well, not to mention the journalists who deigned to investigate them. Tourists—Mexicans, mostly, though gringos who have read about the city’s unofficial narco-tours in The New York Times occasionally show up as well—are relatively less dangerous. We rock up in an open-air taxi, are told a little about the murders that took place here—Tomás shoots us a glance in the rear-view mirror and lets us know the body count with his fingers—and, in the interest of our own safety, are on our way again before most locals even know we’ve arrived. Over the course of two hours, the bodies pile up: five people were gunned down in this factory, two people were burned alive in this house, this is the nightclub owned by the Tijuana cartel’s Francisco Arellano Félix before his arrest, and this is where his brother, Ramón, was killed in an impromptu firefight with a police officer eight years ago. Before too long, one can’t see the trees for the forest: Tomás speaks too fast, the body count is too high, the tapestry of murder is too tightly woven. Less dangerous than Culiacán, the state capital of Sinaloa and the Mordor of the Mexican underworld, Mazatlán is nevertheless where the drug lords come to spend their holidays. Joaquín Guzmán Loera—”El Chapo” of narcocorrido fame and Forbes’s sixtieth most powerful man in the world as of November last year—reportedly has a holiday house here. “It can be a very scary place to live,” Tomás says, “especially when you are raising a family.” As we speed along the malecón from the entertainment quarter to the city centre, a cool breeze comes in off the Pacific and the mid-autumn sun hangs suspended at its zenith. “But with weather as good as this,” he says, “how could you want to live anywhere else?” 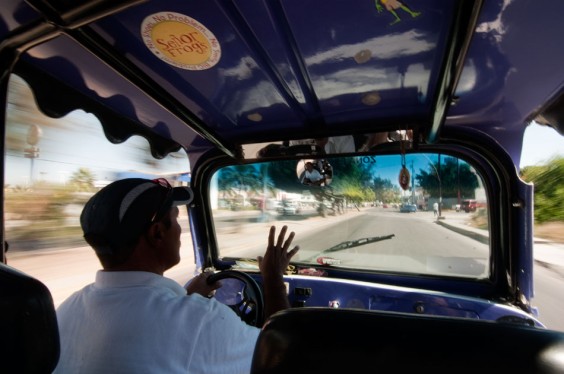 The Narco-Guide: Tomás's open-air taxi speeds down a Mazatlán street towards our first underworld-related stop. In an early moment of bilingual confusion, our driver and guide originally thought we were after little more than a tour of the city, the terms "drug tour" and "narco-tour" failing to register with him. (In fact, he thought we wanted to buy drugs.) "Let me take you to see a friend," he said. "He will understand you better." The friend in question, another cab driver, understood us perfectly. "Ellos quieren una gira mafia," he translated. "They want a mafia tour." 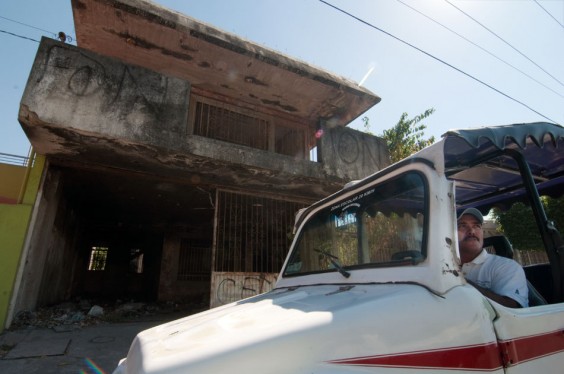 Burnt Out and Blown Away: Tomás sits in his cab outside a house that was recently blown up with seven people inside it. Beyond the self-evident fact that such attacks are drug-related, the specific motives behind them are often opaque. The perpetrators act with anonymity and impunity in equal measure. 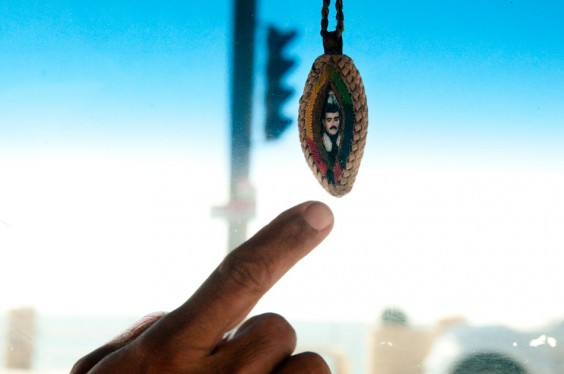 The Patron Saint of Traffickers: Tomás points to a pendant featuring the image of Jesús Malverde, "the angel of the poor," who was hung for banditry in 1909 and has since achieved an ardent following among Mexico's criminal class. The Malverde cult is at its most fervent in Sinaloa: a shrine to the "narco-saint," as the media calls him, has been set up in Culiacán and attracts thousands of devotees each year. But criminals aren't the only ones praying to the possibly apocryphal bandit: some of his followers, like Tomás, believe that getting on Malverde's good side will help them protect their families from drug violence. 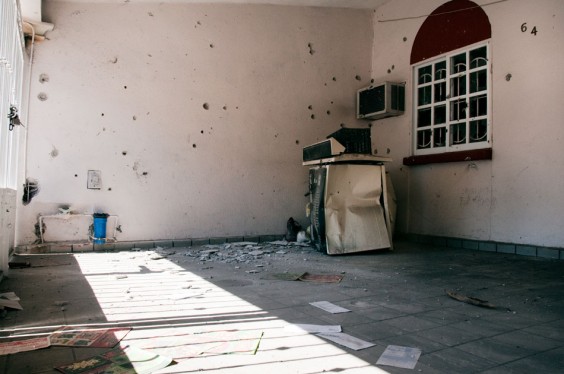 Riddled: The wall of a Mazatlán house dotted with bullet holes. Like the one before it and the one that will follow it, the building has been abandoned and now sits derelict. 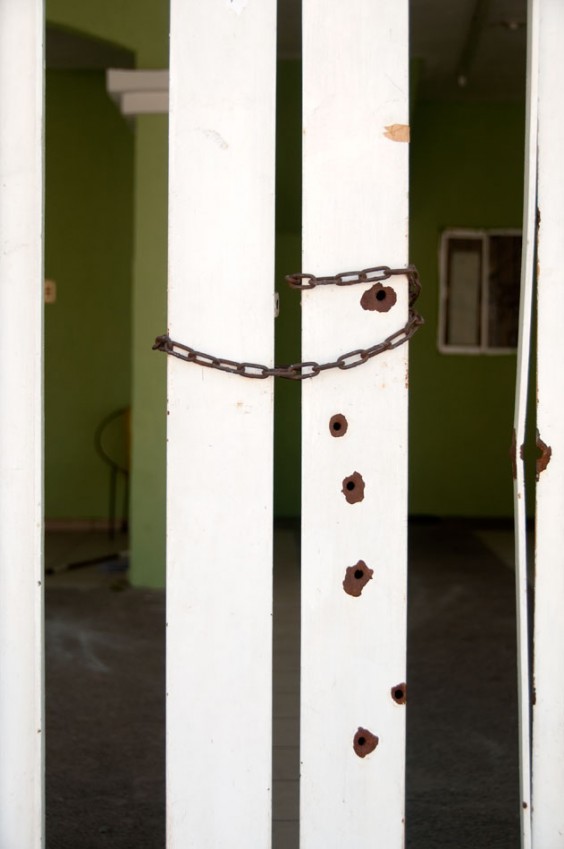 The Pockmarked Fence: Six bullet holes describe an uneven vertical line of fire on a fencepost in one of Mazatlán's most dangerous barrios. 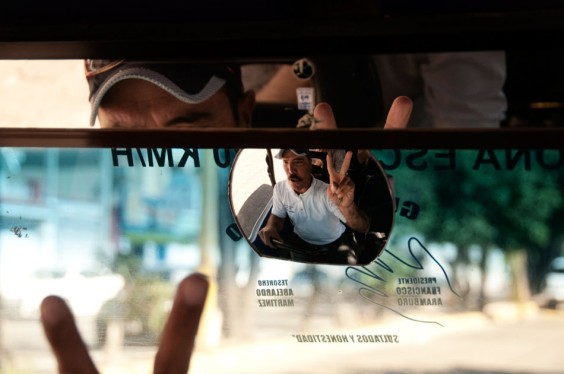 Dos Muertos: Tomás tells us that two people were killed in a drive-by shooting at the site we are about to visit. A Sinaloa native, Tomás remembers when Mazatlán was relatively peaceful despite the drug trade: the problem, he insists, is the power vacuums that are created every time a drug lord is arrested or killed by the authorities. "Everyone wants to be king when that happens," Tomás says. "Too many people wanting to be king is a problem. Things are better when there's only one king. Everybody knows their place."

Shelled: Filled with rubble and lacking a façade, graffiti scribbled across what little of it remains, houses like this one serve as a grim reminder of the violence that plagues the otherwise sun-kissed city, and as such as a warning to others not to cross the cartels or doubt their resolve.