If David Carroll’s United Breaks Guitars was the viral video that gave my time in the United States its unofficial soundtrack (I couldn’t get the song out of my head after hearing it for the first time in Nashville), then the Lonely Island’s I’m On a Boat was the one that gave the last leg of our Mexico trip its musical identity. Austin and I—either growing bored of conversing with each other or else beginning to crack under the pressure of our gruelling schedule—were so looking forward to our eighteen hour criss-crossing of the Gulf of California that we decided the trip needed its own theme song: the trio’s parodic collaboration with T-Pain, for whatever reason, was our first and only choice. We had, as it happened, been on one boat once already, tearing out across the Caribbean from the sprawling shanty metropolis of Belize City on a daytrip to Caye Caulker, which proved at once both prettier and far less interesting than the daytrip’s wretched starting point. But that had been a sprint and this was a marathon: watching the blinking lights of Mazatlán’s radio tower disappear on the horizon, and finding ourselves, for the first time in our lives, alone on the darkness of the sea, was a different matter entirely. We lay back on the deck, in part to shield ourselves from the wind, and looked up at the stars. (We had originally planned to sleep out on deck, but later met Anna, a British-American, who was kind enough to let us share her cabin.) “Austin,” I said, the ocean lapping against the ship’s six-story sides. “Yes?” he replied, pulling his hoodie down a little further and wrapping his arms around himself tightly. “I want to listen to the song again.” He took out his iPod and, taking one earphone each, we pissed ourselves laughing in the dark, and shivered. 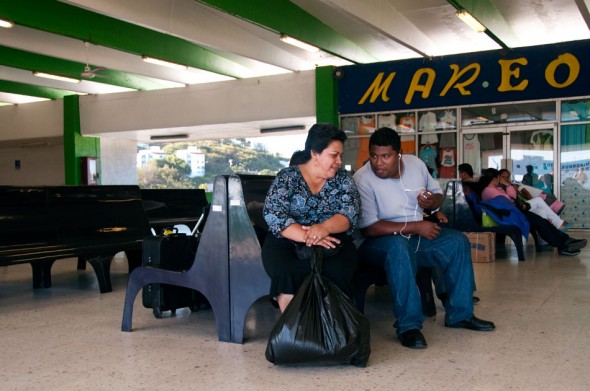 Garbage Bags and iPod Earphones: Travellers wait in the Mazatlán ferry terminal for the departure of the Chihuahua Star, the Baja Ferries vessel that will take them across the Gulf of California to the city of La Paz in the state of Baja California Sur. 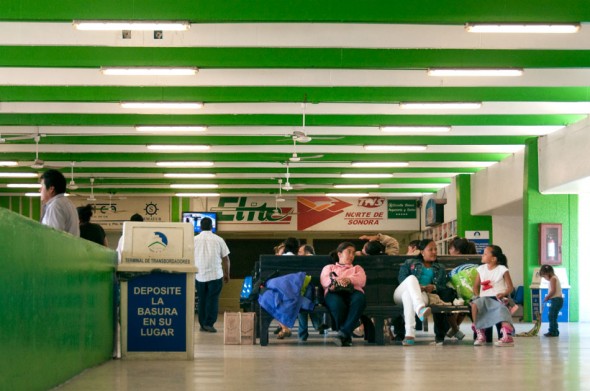 Green Stripes: The travellers are preparing for a lengthy trip: the passage from Mazatlán to La Paz is twelve hours long, departing the former city, in the drug-wracked state of Sinaloa, in the late afternoon and arriving in Baja early the next morning. 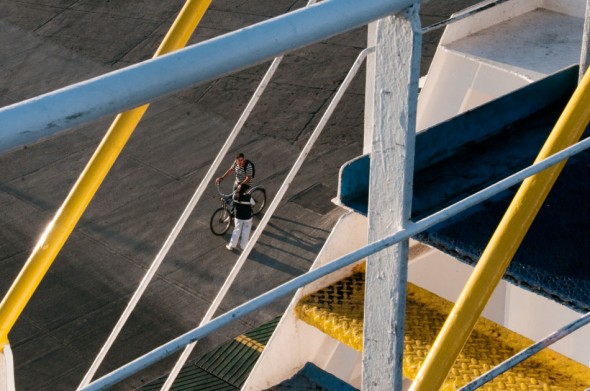 Lines of Blue, Yellow and White: The view of the Mazatlán docks from the Chihuahua Star. Built in 1989 in the Mitsubishi H.I. shipyards in Japan, the ship is one hundred and eighty-seven metres long and was bought by Baja Ferries in February 2008. It can accommodate twelve hundred passengers and eighteen hundred linear meters of cargo. 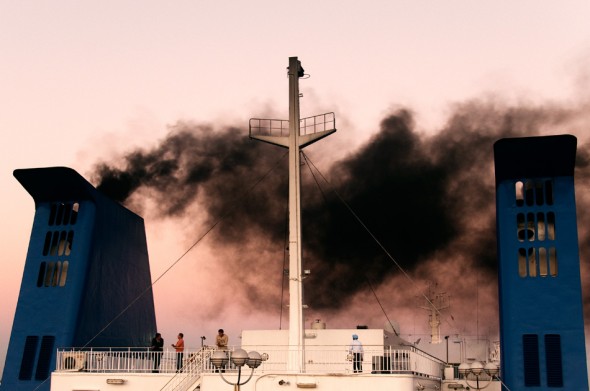 Black on Pink: Smoke streams out into the Mazatlán dusk. As the ship readies to depart, a long procession of semi-trailer trucks boards it from the rear, and hundreds of travellers—Mexicans and foreigners alike—take to the deck to watch the process. 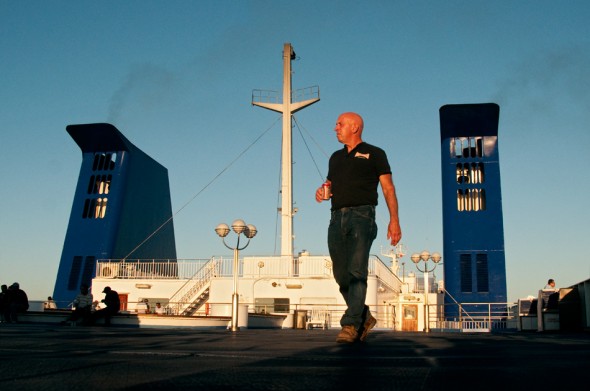 Hitting the Deck: Beer in hand, an American man makes his way across the deck to the stern. Many of those making tonight's passage are involved in the Baja 1000, the world-famous off-road race that sees hundreds of motorcycles, buggies, trucks and custom cars race from Ensenada to La Paz, and sometimes back again. 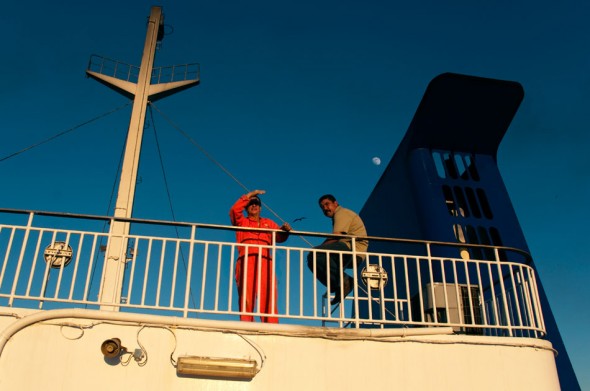 The Moon: Two travellers stand on the Chihuahua Star's upper deck waiting for the boat's departure. 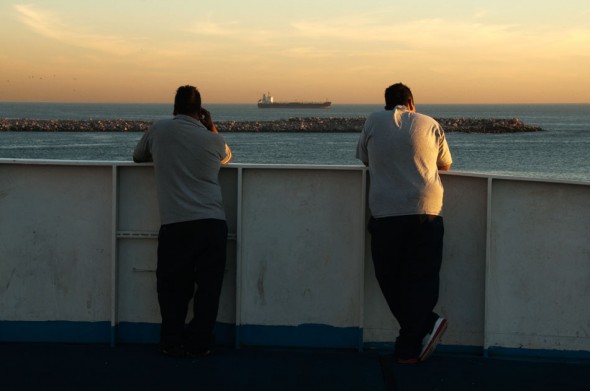 Trucking the Gulf: Two truck drivers stand at the ship's railing waiting for the trip to begin. Although technically still working, most of the drivers spend the whole twelve hours of the passage in the bar, drinking and listening to bad country music all through the night. 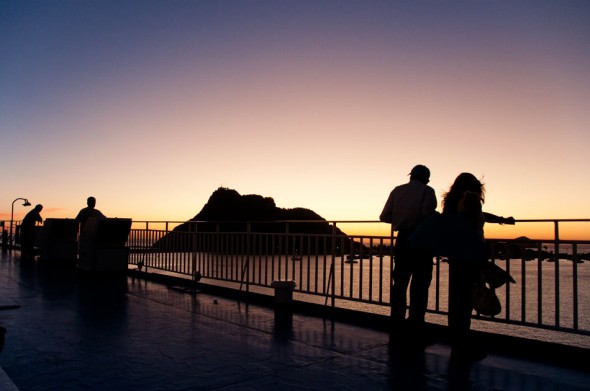 Twilight Departure: The sun disappears behind the western horizon as travellers and truck drivers alike await the ship's departure. Although the boat is meant to leave at five, it is closer to six o'clock before its foghorn sounds for the first time. 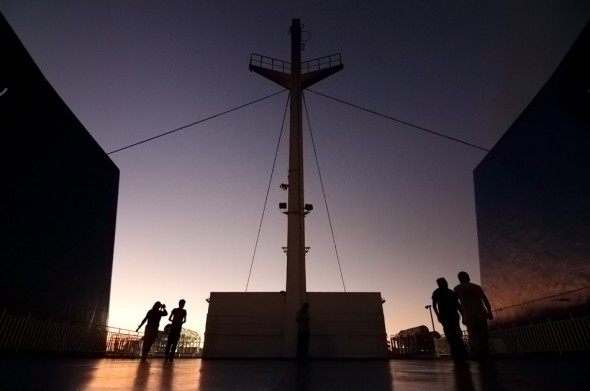 Nautical Geometry: Twilight renders silhouettes of those still out on the deck as the temperature begins to drop and people start making their way back inside. Most are heading off to eat: the Chihuahua Star sports its own á la carte restaurant and cafeteria, as well as a disco (which is closed for renovations), a piano bar (which has a locked piano), and an arcade (where one of the games ate my coins). 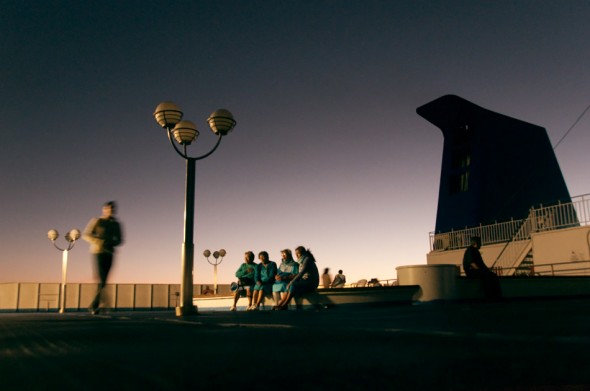 Huddle: A group of women sit together on the deck as the ship begins making its way northwest. They will soon head inside as well: by nine o'clock, the deck is empty of all but the most committed cigarette smokers. 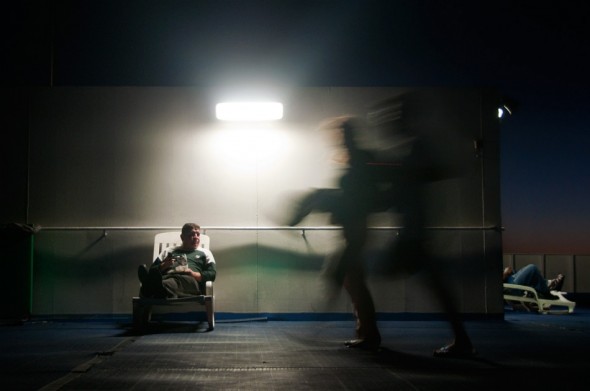 I Got a Nautical-Themed Pashmina Afghan: A truck driver relaxes on a deckchair as the last of the sunlight disappears. 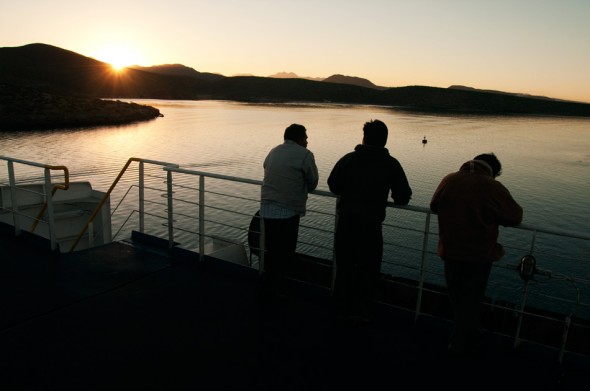 Sunrise in Baja: The sun rises over the state of Baja California Sur as the Chihuahua Star arrives in the Bay of La Paz. 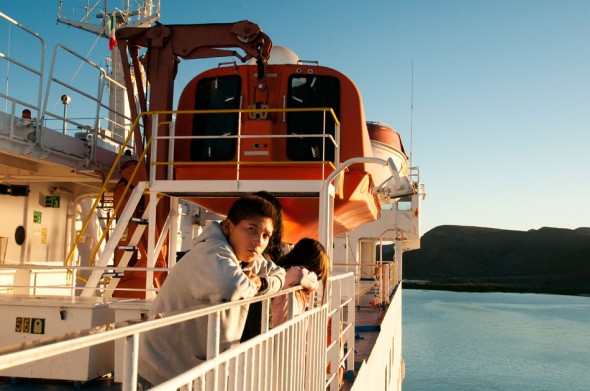 This Boat is Real: With the ship's lifeboats and the undulating hills of Baja behind them, a family emerges from their cabin to watch the ship's arrival in port. 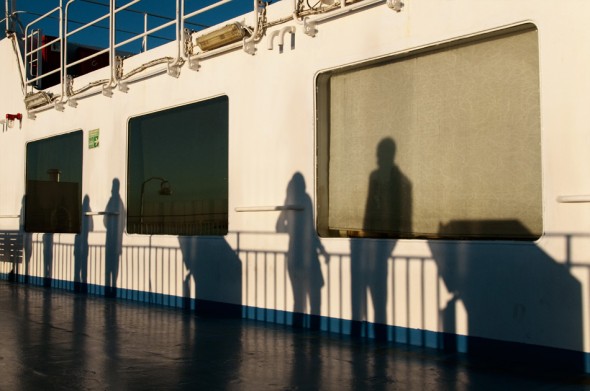 Shadow Travellers: The early morning sun casts the traveller's shadows onto one of the ship's walls. 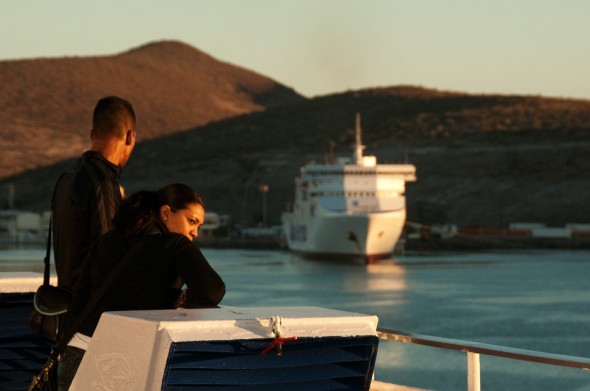 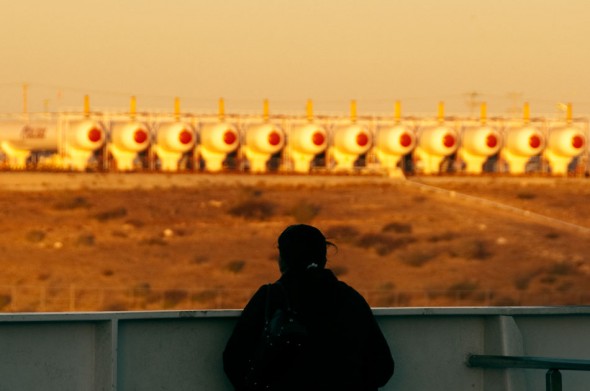 Red Dot Morning: A woman watches as the morning sun hits a row of horizontal petrol tanks on shore. 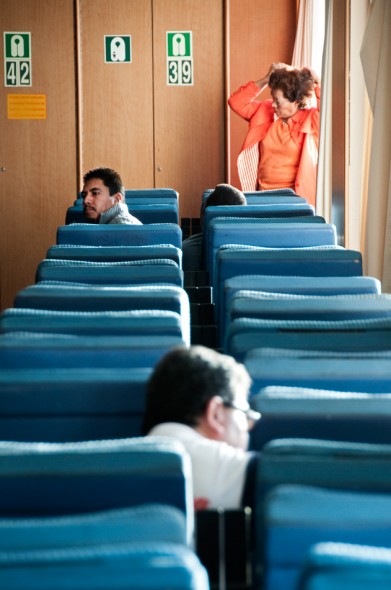 Morning Has Broken: Inside one of the Chihuahua Star's two sleeping halls—which are curiously named for Picasso and Dali—people begin to wake up and get their things together. Between them, the two halls can accommodate four hundred and eighty-seven passengers. 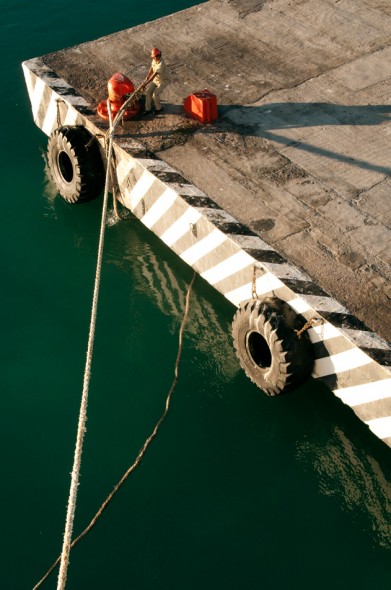 Heave: A dock worker fastens the Chihuahua Star to the shore. Despite the trip being advertised as twelve hours long, we have now been on the boat for nearly fourteen and a half. 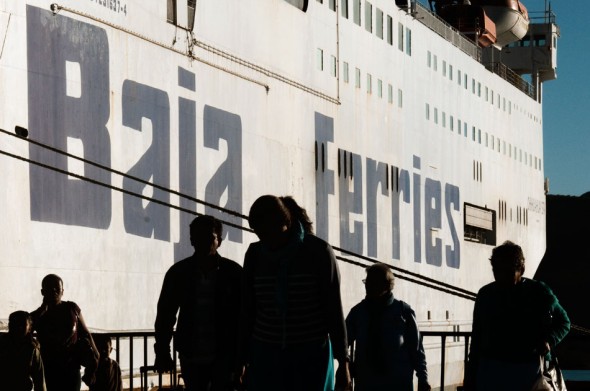 It's a Big Blue Watery Road: The Baja Ferries logo looms large over the silhouetted passengers disembarking the Chihuahua Star. 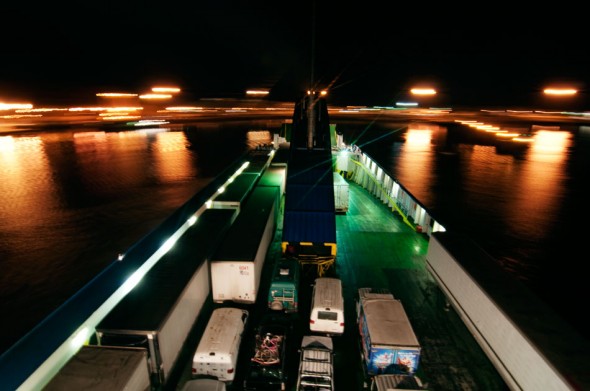 A Rightward Tungsten Blur: The stern of the California Star veers towards the Baja Ferries dock in Topolobampo, Sinaloa. The site of a radical utopian colony from roughly 1884 to 1894, Topolobampo's other claim to fame is that it boasts the second largest natural deepwater port in the world.

Dots and Dashes in Indigo: A long exposure time transforms stars into mid-air em-dashes as the California Star enters the port of Topolobampo. Of the two passages that run out of La Paz, this is easily the shorter, taking a mere six hours. 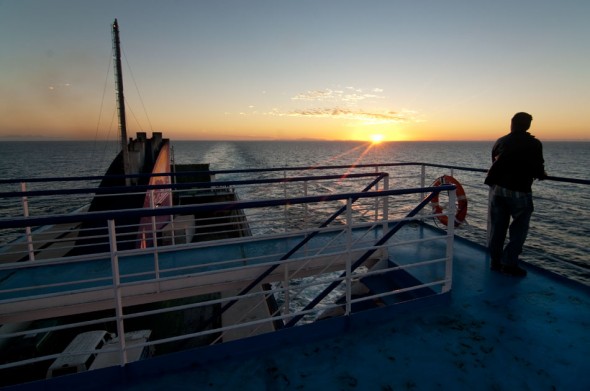 I'm On a Boat: A traveller watches Baja California recede from sight as the California Star makes its way across the gulf that gives it its name.