Viewing: Home › Between Two Anniversaries › Migration IV: A Walk in the Parque

Our Mexican host was not interested. Not in a tourist attraction that took something so serious and turned it into a source of amusement, he said. That sort of thing, he said, was an embarrassment. His objection, on the face of it, seemed valid: Parque EcoAlberto’s caminata nocturna, or night walk, involves groups of middle-class thrill-seekers slogging their way across rugged terrain while pretending to be illegal immigrants crossing the country’s northern border, and can appear on paper an insensitive novelty. But after three-and-a-half hours spent trudging through darkness, twisting our ankles on half-buried tree stumps and enduring what was essentially a forced march through rocky passes ill-suited to a night-time hike, the novelty factor had more than worn off and our feelings of empathy for real indocumentados were second only to those of pain in our calf muscles. Emerging out of the valley and onto a road, our balaclava-clad coyotes herding us into vans and onto utility vehicles, blindfolding us and driving us through the icy night to an undisclosed location, we could only be thankful that none of this was real. (At least not for most of us: for those looking up at us from the torchlight of the medical team, their evenings cut short by the aforementioned tree trunks, the pain was real enough.) When we finally removed our blindfolds at half-past two in the morning, we were rewarded with the sight of hundreds of candles dotting a cliff face and flickering in the wind: lit, we were told, on behalf of those who never make it to the other side. 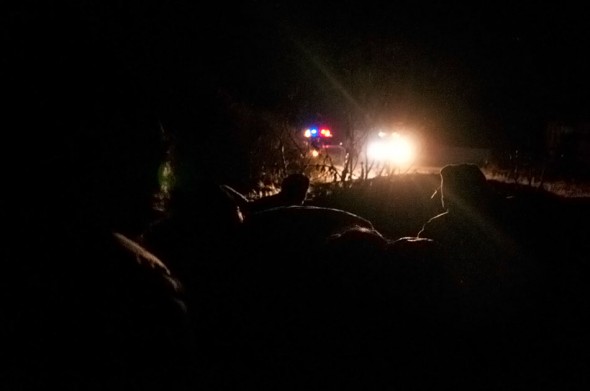 The Prowl: Tourists watch from behind a small foothill as actors playing US Border Patrol authorities scour the area for them. Shining torches into the bushes and wielding bullhorns, the actors shout into the darkness twice: once in English to alienate the tourists and then again in Spanish to make sure they understand. “Mexicans! We know you can hear us! If you don’t turn yourselves in now you will go to prison for some years! We have Mexican food for you! We have quesadillas and tamales!” 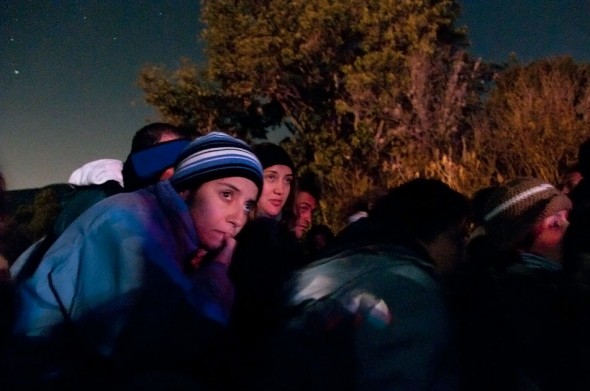 The Huddle: The opening moments of the walk are at once both exciting and nerve-wracking, with the sound of police sirens shattering the relative silence of the night almost immediately after the group has set out. Huddling behind foothills and pieces of corrugated iron, the tourist-indocumentados giggle nervously and shoosh those who are giggling, while others move about restlessly as they try to find a comfortable position. The group usually consists of around fifteen to twenty people, but tonight, because it is a long weekend, it is significantly larger. But even a group as large this one is prone to go almost completely silent when the authorities begin to shine lights in its direction. 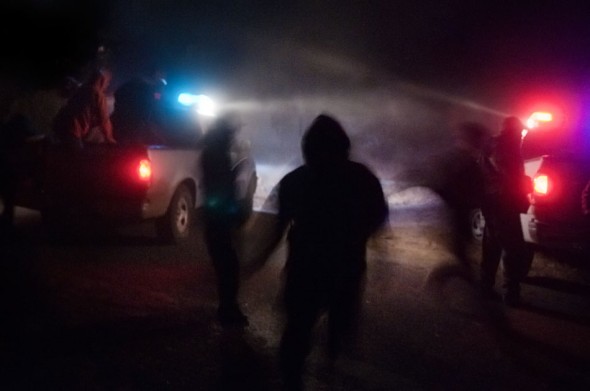 Organised Chaos: One of the Border Patrol officers is almost upon the tourist-indocumentados when the head coyote leaps up and screams: “Run!” What follows are two minutes of organised chaos as everyone jumps the corrugated iron fence and starts running down the road. What is striking and unexpected is the violence of the stampede: the actors playing the authorities tackle those playing the coyotes to the ground—or is that one trying to thrash his way out of an officer’s embrace actually one of the tourists—with a ferocity that almost seems excessive. 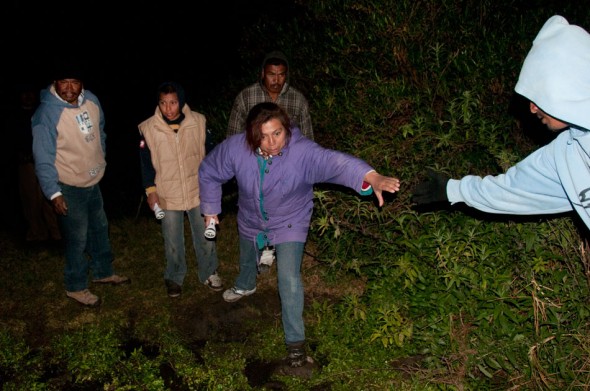 A Helping Hand: After climbing down a steep embankment from the road, the group begins to make its way through a muddy section of riverbank. This is where the true nature of the walk begins to make itself known: this is not going to be an easy evening or even a particularly pleasant one. While more than several people wind up shin-deep in mud, one or two others fare even worse, twisting their ankles as they attempt to leap from one patch of dry land to the next. 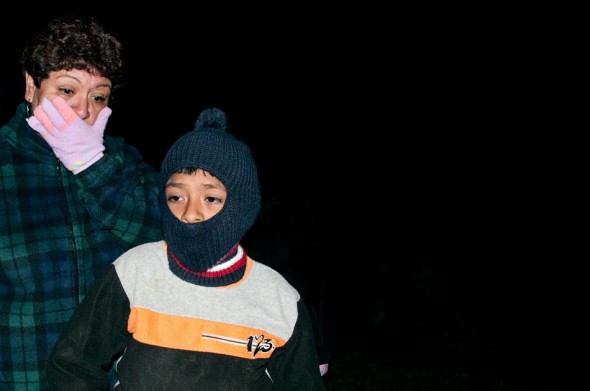 Subcomandante: A woman and her son make their way along the riverbank. Uncommon except on long weekends and holidays, a large number of children are on the walk this evening. 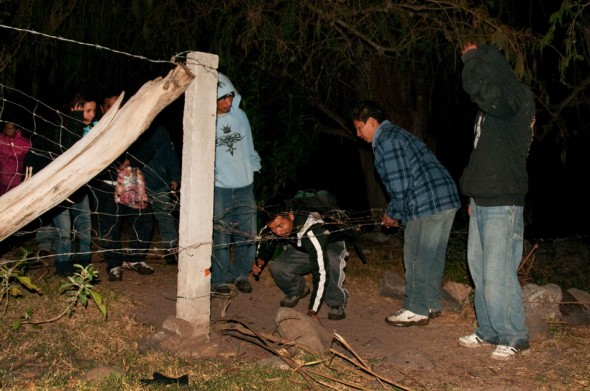 Going Under When Over Would Be So Much Easier: One of the coyotes holds up a barbed-wire fence for one of the tourist-indocumentados to crawl under. The walk is littered with natural and man-made obstacles for the group to overcome: in addition to navigating the muddy riverbank and climbing under fences, the tourist-indocumentados are also forced to crawl through a narrow, pitch black storm drain and balance their way across a river on logs. 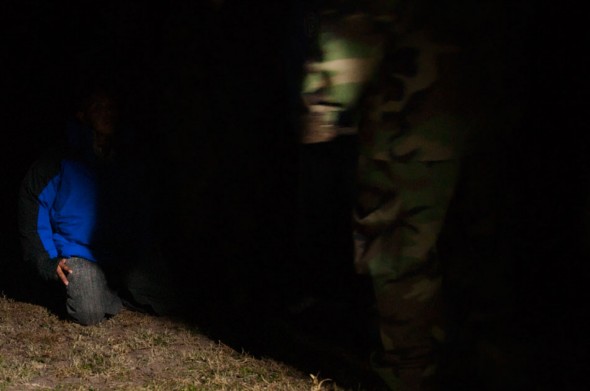 Captured: At times, the walk feels like a strange cross between a forced hike and dinner theatre, with staged events taking place at intervals along the route. While the tourist-indocumentados cower in a nearby thicket, a group of actor-indocumentados is captured by the authorities and grilled for information. 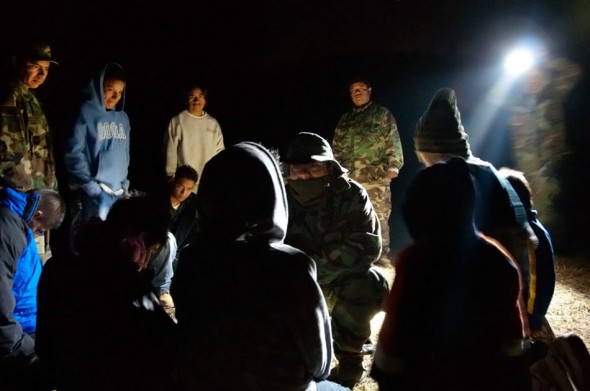 Negotiation: The group of actors is encouraged to turn in the group of tourists. 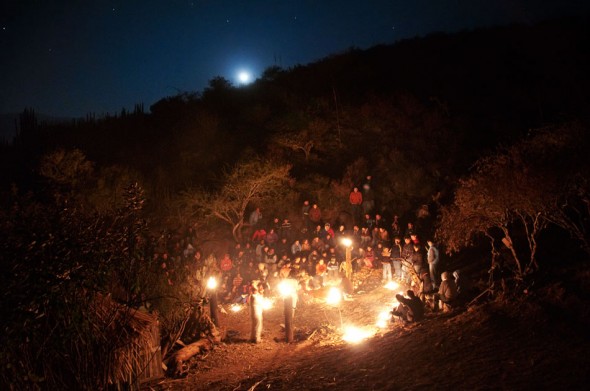 Indian Camp Camp: After the tourist-indocumentados have entered the United States, the evening’s strangest and most distracting event takes place: a meeting with Native Americans. Played by Mexicans dressed as Hollywood-style Indians, these so-called natives welcome the tourist-indocumentados to their country before choosing a female member of the audience to become their chieftain’s queen. After adorning the girl with a feathered headdress, they proceed to pose with her for photographs. Parque EcoAlberto is in reality over five hundred kilometres from the US-Mexico border. 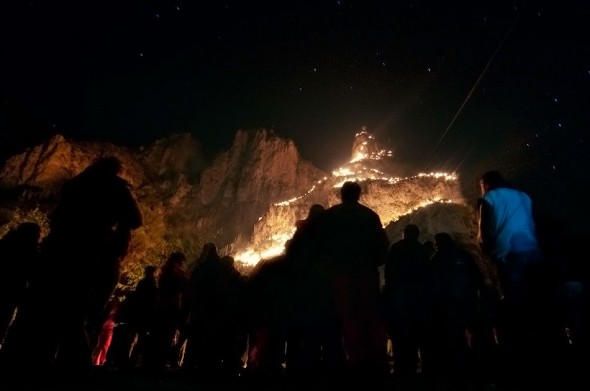 In Memoriam: The evening ends with a tribute to Mexico’s real indocumentados, who have been forced to try for a better life across the border because they are less well off than the tourists who have spent the evening pretending to walk in their shoes. “We should always be thankful,” the head coyote tells the group as he finally removes his balaclava, “that we are not in a position where migration is our only option.” He leads the group in a rendition of the country’s national anthem while the candles flicker behind him in the wind.