The last time we posted a miscellaneous series of images, Austin had just returned to Mexico from Jeffersonville, New York, and I had finally caught a flight back to Cancún from Havana. This second volume follows, not a return to the country, but rather our departure from it: Austin has made his way back to Vancouver and I have made mine to Los Angeles. Our trip ended quietly at six o’clock in the morning, with a hug and a handshake out the front of an El Paso hotel, some fifteen hours after we crossed the Paso del Norte International Bridge and left Ciudad Juárez and the country it belongs to on foot. Before entering that country several months ago, everyone we met in the United States warned us: “Be careful! It’s so dangerous there! I’ll pray for you on a daily basis!” After we walked across the bridge, the woman at the x-ray machine on the American side asked us how long we’d been on the other. “Two-and-a-half months,” we said. “We’ve been working on a book.” Her reply was the perfect welcome back to America: “Oh, my god! Weren’t you scared?” The truth is that we had no reason to be: even in Juárez, the so-called murder capital of the world,  we found that most of what gets written and said about the country is simplistic at best and wilfully misleading at worst. We still have six series of photographs to publish, covering  two of Mexico’s strangest domestic tourist attractions, one of the world’s great train journeys, and Centenary of Revolution celebrations in that aforementioned capital of murder, and we look forward to uploading them over the coming weeks. In the meantime, we hope you enjoy this series from the second leg of our travels. 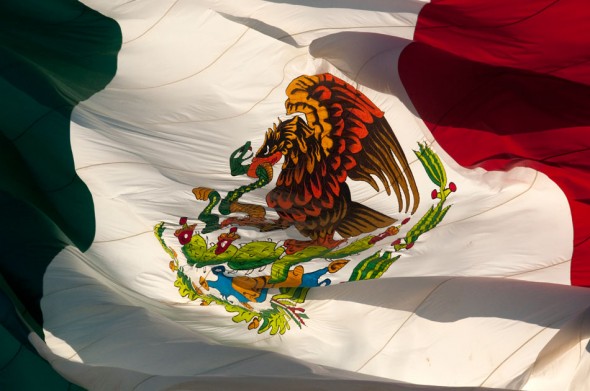 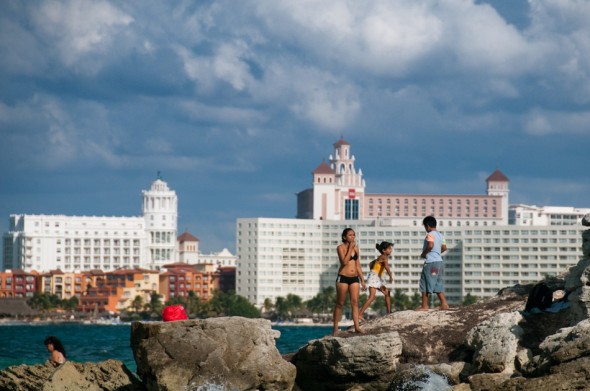 Cancún on the Rocks: Swimmers at Playa Tortugas near Cancún's Zona Hotelera. 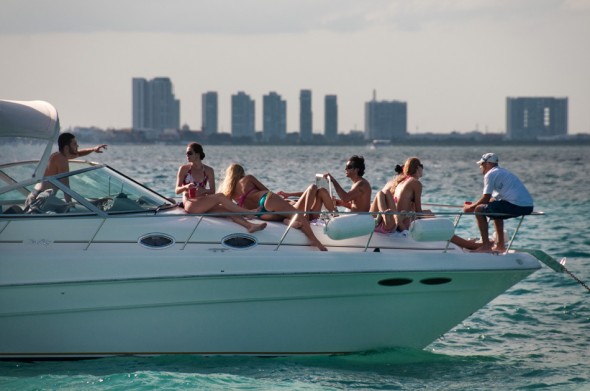 The Beautiful and Damned: Western tourists—Cancún's bread and butter—enjoy the mid-afternoon sun off Playa Tortugas. Somewhat defeating the purpose of the vessel, the tourists are not anchored very far out: when one of them needs to go back to shore, he merely lowers himself in the water and walks. It turns out it only comes up to his waist. 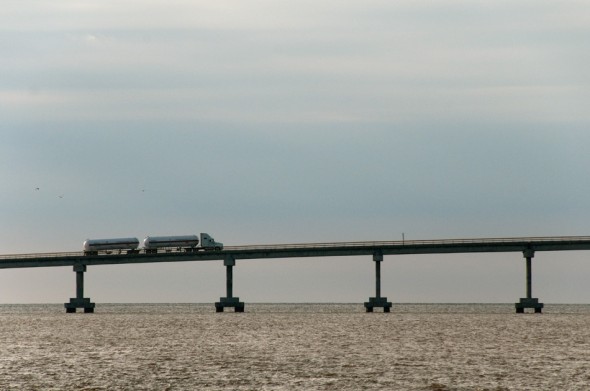 A Farewell to Carmen: A truck begins to make its way across Puente El Zacatal in the state of Campeche. Spanning the Gulf of Campeche's Laguna de Términos, the 3,861-metre bridge connects the Isla del Carmen to Mexico's mainland. 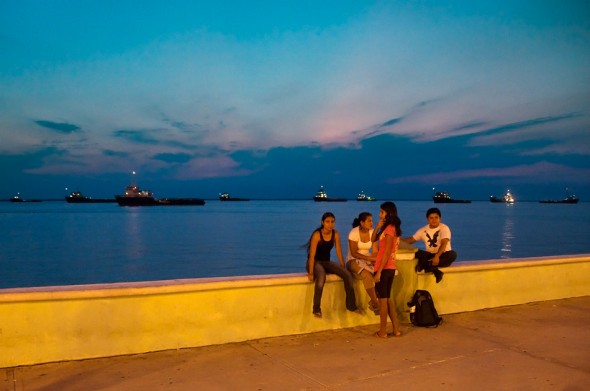 Platform Supply Vessels at Twilight: Residents of Ciudad del Carmen sit at the city's malecón, the lights of anchored PSVs flickering across the Laguna de Términos. Until the 1970s, Ciudad del Carmen was a small fishing town, with shrimp its primary industry. When oil was discovered in a nearby section of the Gulf, the fishing stopped and the town exploded: Pemex and a number of foreign companies moved in. Accordingly, Ciudad del Carmen is today home to one of the largest populations of Texan expatriates in Mexico. 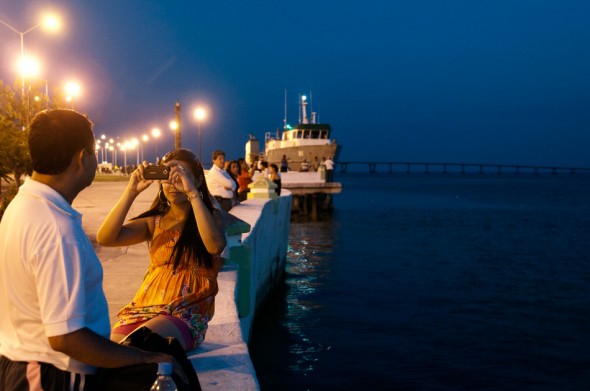 Evening on the Esplanade: Talking advantage of the clear evening, locals and the city's few tourists alike take to the malecón to watch as night falls. 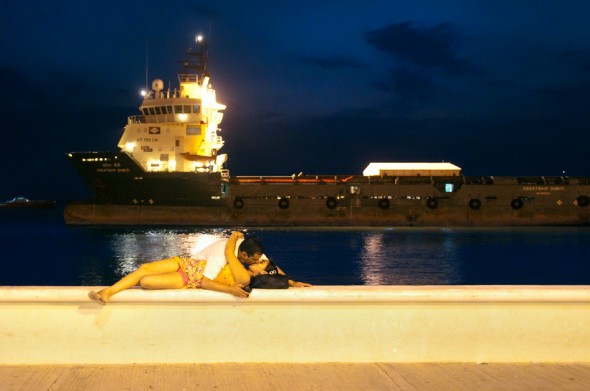 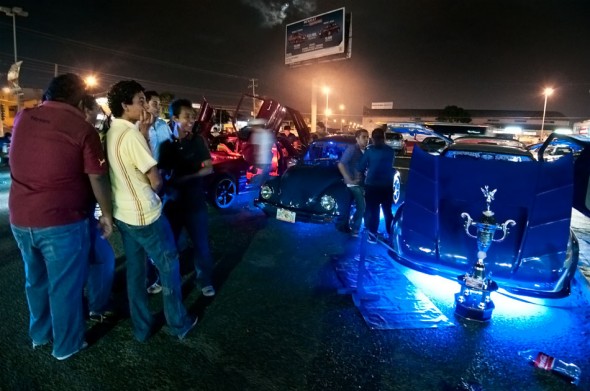 Los Revheads Mexicanos: We were passing through Tuxtla Gutiérrez, a city of a little over a million people in the Depression of Chiapas, making our way to San Cristóbal de las Casas when our bus pulled into a estación de autobuses with a car park full of teenagers and their pimped-out cars. All wing doors and customised sub-woofer installations, a number of the vehicles had trophies placed before them on the asphalt: these were award-winning rides. 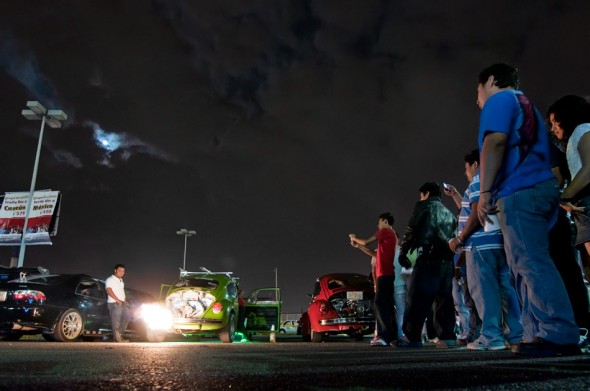 The Moon and the Naked Flame: Onlookers take photographs as one of Tuxtla Gutiérrez's customised cars literally backfires. 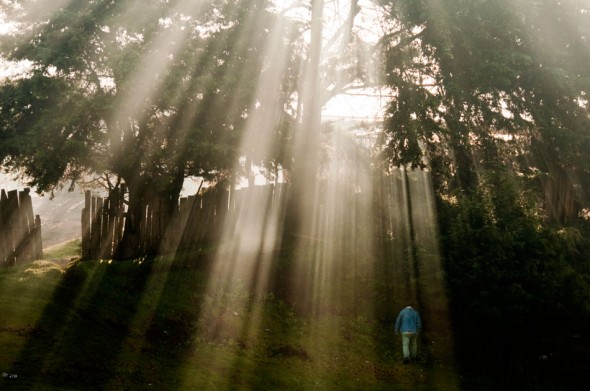 A Morning in Chiapas: To get to Tapachula, where we put together our series on el Albergue Jesús el Buen Pastor de Pobre y el Migrante, we first had to drive from San Cristóbal de las Casas through the mountains of Chiapas. The seven-hour marathon weaved through rainforests and ran along pebble-bottomed rivers, hugging the Guatemalan border tight until depositing us finally on the Pacific coast. We listened to Rachmaninoff. This photograph was taken at the beginning of the journey, in one of the roadside villages outside San Cristóbal. 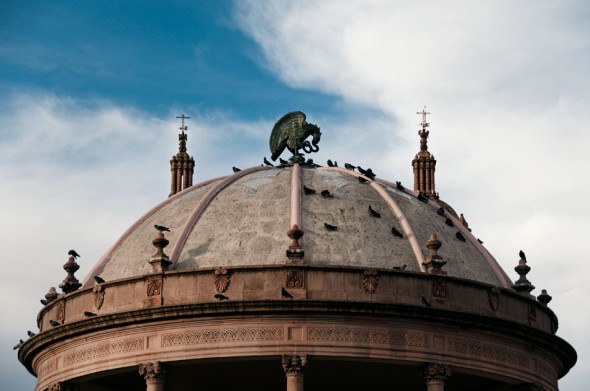 The Eagle and the Serpent: With the twin spires of la Catedral Basílica Menor de la Inmaculda Concepción rising above it, the rotunda in Durango's zócalo also sports a three-dimensional representation of the country's coat of arms. The Golden Eagle devouring a snake while perched upon a prickly pear cactus, while seemingly a simple representation of good triumphing over evil, actually has ancient religious connotations. When they were not yet an empire but still a wandering tribe, the Aztecs were told, by numerous ancient texts, to watch for an eagle devouring something while perched on a prickly pear (precisely what it was supposed to be devouring varied from text to text). They were to build their city—which they called Tenochtitlan—on that spot. Today it is known as Ciudad de México. 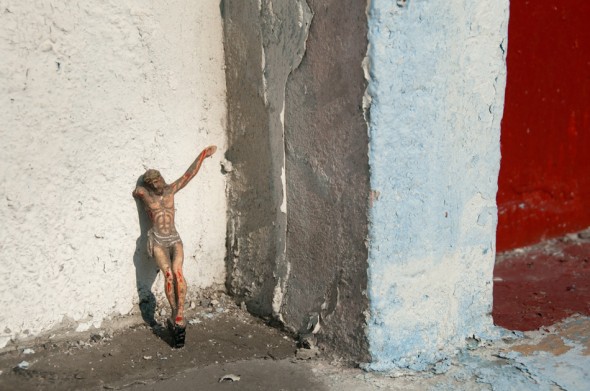 A Broken Saviour: Like many in Mesoamerica's lower-lying regions, Ciudad del Carmen's cemetery is above ground: the town's average elevation of a single metre renders proper burial impossible. As a result, the cemetery is a small city of stacked sarcophagi, with each tower seven or eight feet high. With peeling stucco and dead flowers the norm, an amputee Christ, without even a cross to hang on, is very much of a piece with its surrounds. 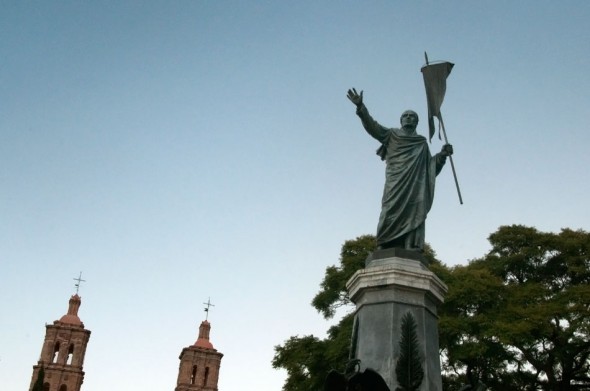 El Padre de la Patria: Just before midnight on September 15, 1810, Miguel Hidalgo y Costilla addressed his congregation from the steps of his church in the small town of Dolores in the central Mexican state of Guanajuato. "Death to bad government!" Hidalgo cried, in what later became known as el Grito de Dolores. The next morning, the priest's revolutionary army marched on the region's capital, marking the beginning of the Mexican War of Independence. With the spires of his church behind him, Hidalgo today stands, commemorated in bronze, atop a monument in the town's zócalo. The town is now named Delores Hidalgo. 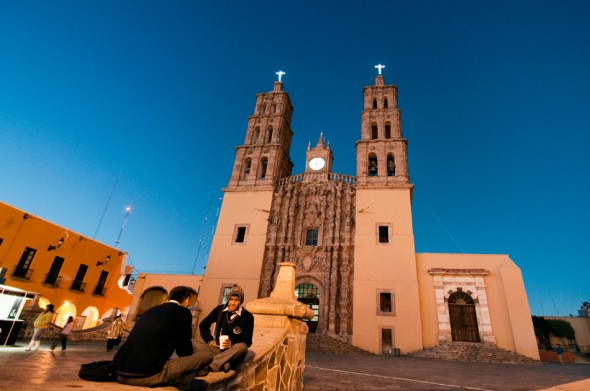 El Lugar del Grito: Residents of Dolores Hidalgo sit outside the front of the church from which Miguel Hidalgo y Costilla issued the Grito de Dolores in 1810, while a man in the courtyard rings the church's bells with the aid of a very long rope. 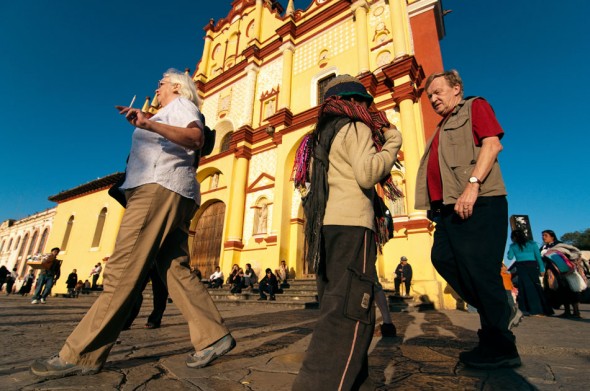 On Zapatista Chic: British tourists turn down the offer of handmade scarves outside la Catedral de San Cristóbal de Las Casas. The city is a very popular tourist destination: elderly genteel types, interested in the cobble-stoned streets of the country's older colonial cities, brush shoulders with dreadlocked peaceniks who sits on the those same cobble-stoned streets smoking pot and playing acoustic guitar. Mostly comprising western, twenty-something anti-globalisation types, this latter group has primarily been drawn to the city by the romantic allure of Subcomandante Marcos and the Zapatistas, whose likenesses can be seen throughout the city's numerous souvenir stores, adorning tee-shirts and free-trade coffee mugs. Like that of Che, these images lose all meaning when they become commodities, the irony being that those who buy them are usually also seeking to bring about the end of global capitalism. 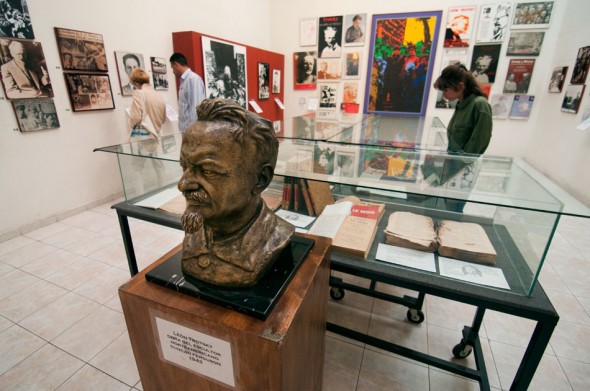 The Prophet Remembered: A bust of Lev Davidovich Bronstein—better known to the world as Leon Trotsky—sits in the the Museo Casa de León Trotsky in the Coyacán district of Ciudad de México. Exiled from the Soviet Union in 1929, Trotsky settled in Mexico in 1937. After living with Diego Rivera and Frida Kahlo in the famous Casa Azur for several years—the house is now the stunning Museo Frida Kahlo—Trotsky moved to his compound on Avenida Viena in 1939, where he was murdered with an ice axe in his study the following year. The house is now the site of the museum. 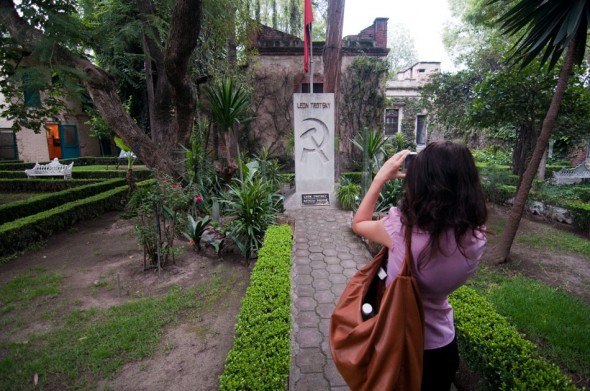 As Hard As the Soviet Hammer and as Bent as the Sickle that Crosses It: A tourist photographs Trotsky's mausoleum. The ashes of both revolutionary and his wife, Natalia Sedova, are buried in the compound's garden, which the former considered his pride and joy: in between writing numerous books, including his autobiography, Trotsky excelled at growing vegetables and raising animals on the property. "Ideas that enter the mind under fire remain there securely and forever." 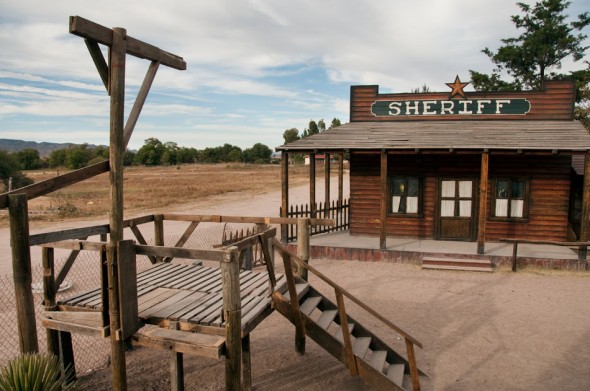 Can You Hear the Guns, Durango?: The gallows and sheriff's office in Chupaderos, a Western movie set about ten kilometres north of Durango. A number of Hollywood Westerns, television series and commercials were filmed here between the 1950s and the early 2000s, including Comanche, A Man Named Horse and several episodes of Walker, Texas Ranger. After production dried up for good, the locals moved in, occupying not only the structurally sound buildings but also those that are only fronts: while the saloon is now a convenience store, the food and seed store's front door leads directly into a chicken coup. 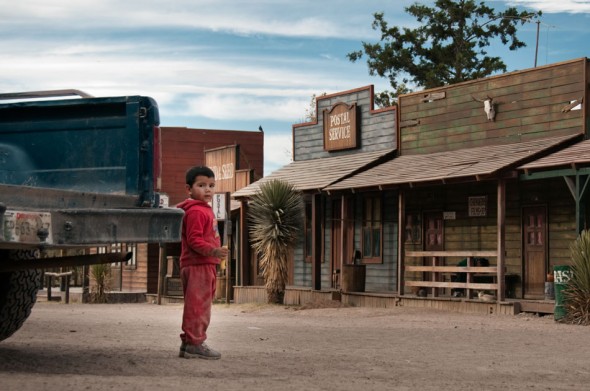 That's Not a Knife, This Is a Knife: A Chupaderos local brandishes a small knife, which he will proceed to attack his slightly older brother with. One can't help but feel that the town would have been a fabulous one to grow up in: what better place to play Cowboys & Indians than on a Western film set abandoned by Hollywood? Horses still ride by occasionally, but now they're ridden by locals on their way from one side of town to the other. 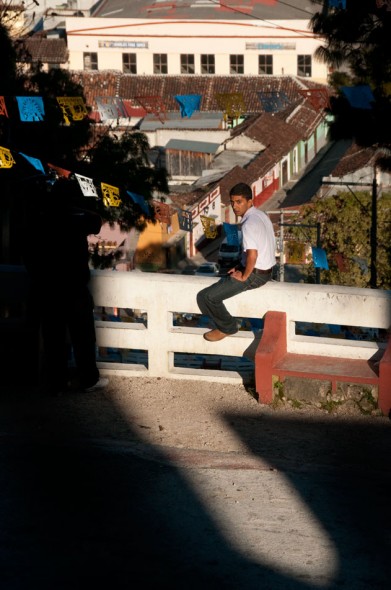 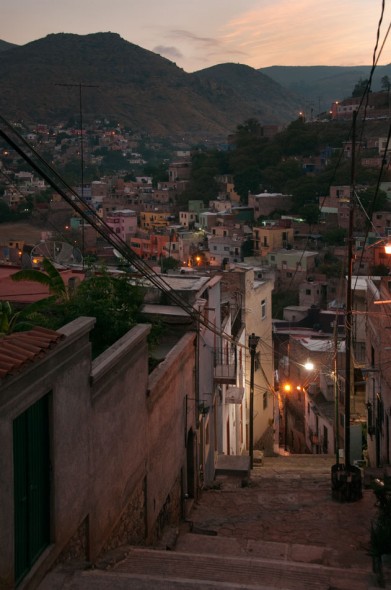 Sunrise Steps in Guanajuato: The steps leading down to Guanajuato's city centre. 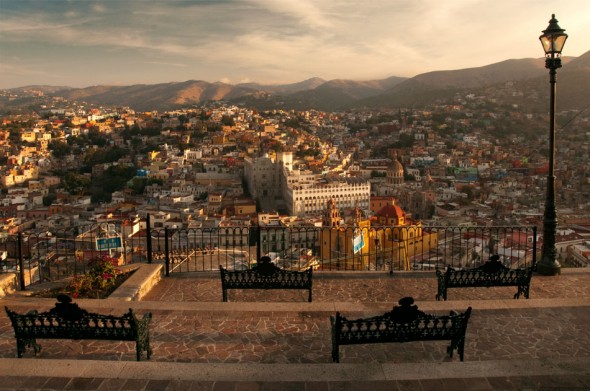 A Quartet of Benches: Guanajuato at dawn. With a population of a little over 150,000, the city is located in a narrow valley several hundred kilometres north of Ciudad de México, its geography resulting in some of the most fascinating hair-bend turns and winding alleyways in the country. 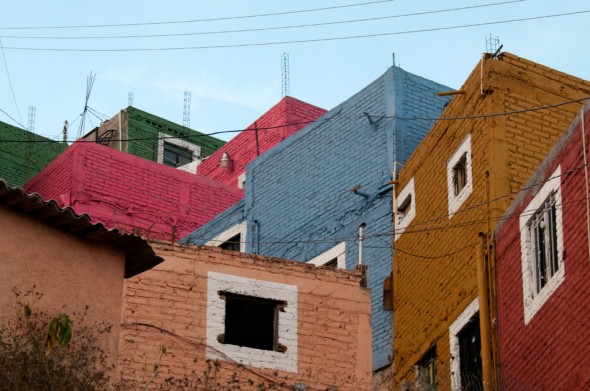 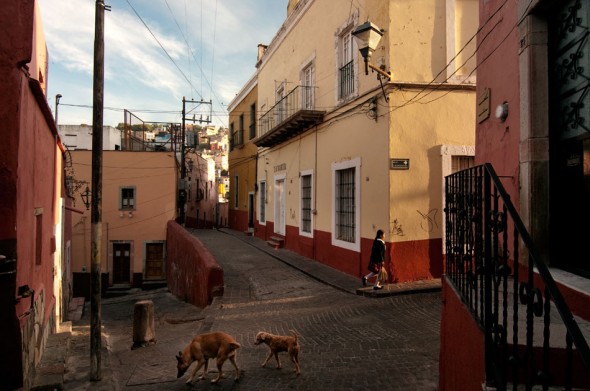 Strays and Wires and an Early Morning Walker: Guanajuato begins to stir to life. 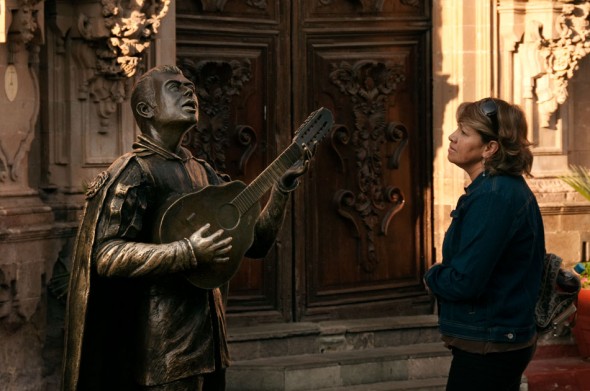 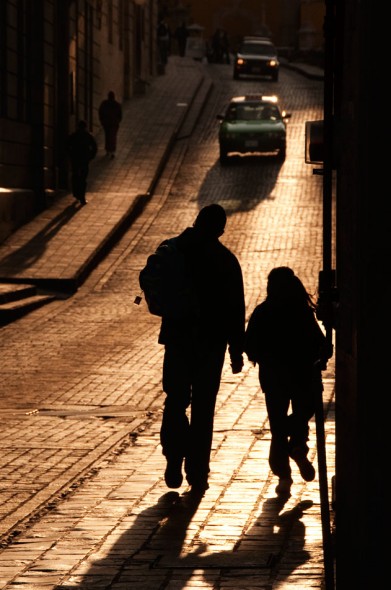 Here Comes the Sun: A father carries his daughter's backpack as he walks her to school in Guanajuato.