” The Mexican … is familiar with death, jokes about it, caresses it, sleeps with it, celebrates it; it is one of his favourite toys and his most steadfast love.” — Octavio Paz

There are skulls in the presidential palace. They belong to country’s founding fathers and have been moved here from la Columna de la Independencia, where they usually reside in a mausoleum at the structure’s base, for the last couple of months of the year. It takes me a moment to realise what I’m looking at or, rather, looking into: Miguel Hidalgo y Costilla’s head is two hundred and fifty-seven years old and its eye sockets are enormous. It is sitting in a mahogany box, which is dark and varnished and behind glass, atop of a couple of other random pieces of the so-called father of the nation’s remains. I think one of the pieces is a femur or something. The wooden box is accompanied by three others. These contain what’s left of the skulls of Ignacio Allende, José María Morelos y Pavón and Juan Aldama. One of them is little more than a skullcap-shaped piece of crown—forgive the pun—and a sliver of lower jaw. Other glass cabinets line the walls, all of them containing perfectly preserved fragments of centuries-old bone. All in all, I figure I am surrounded by the mortal remains of maybe fourteen or fifteen independence leaders and revolutionaries. The base, material nature of these calcium deposits seems to fly in the face of the near-religious veneration of the national icons they once belonged to, proving that these figures were made of the same stuff as the rest of us. Not that I’m thinking about this right now, of course. I’m too busy staring into the holes where somebody’s eyes used to be and now aren’t. People move about around me as though there is nothing unusual about any of this. But then, of course, in Mexico there isn’t. Death, here, is stock-standard stuff: it is familiar, it is everyday, and it is everywhere. 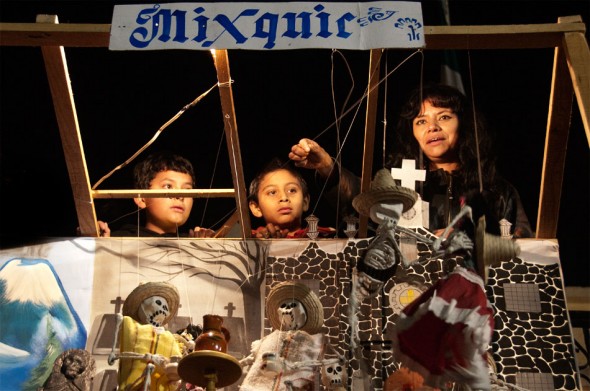 The Marionettes of Mixquic: San Andrés Mixquic, a small community to the south-east of Ciudad de México, is famous for its el Día de los Muertos celebrations. In the town's zócalo, children are shown how to work skeletal marionettes that, back from the dead, drink and dance and live their annual evening back on earth to the full. 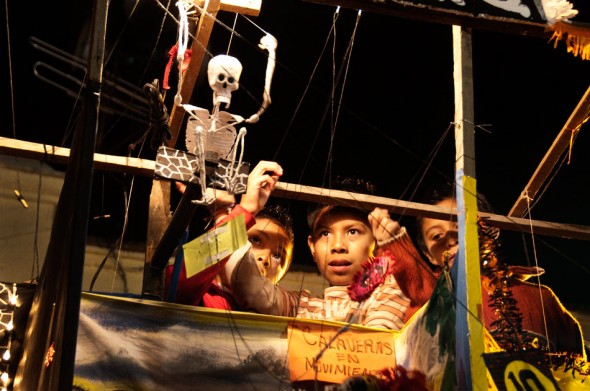 Pulling the Strings: A group of Mixquic children operate the marionettes. Families construct elaborate rigs and bring them to the zócalo for the evening, depicting death undertaking a variety of activities, from vegetable gardening to horseback riding and train robbery. 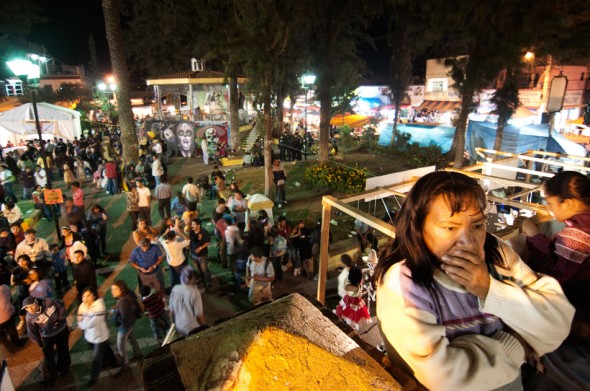 On the Puppet Masters' Perch: Onlookers fill the zócalo, watching the marionettes and listening to local brass bands. A little before midnight, F.W. Murnau's Nosferatu is screened with live accompaniment by a local rock band. 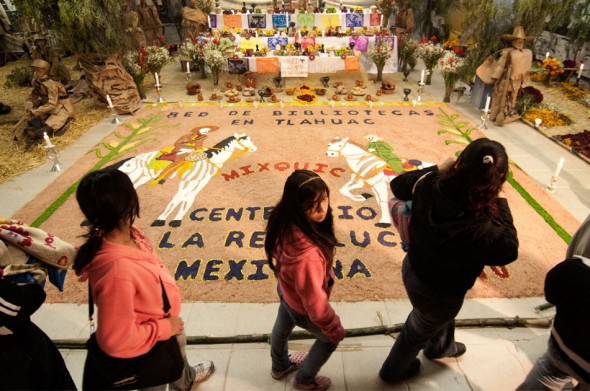 The World in Several Hundred Thousand Grains of Sand: El Centenario de la Revolución Mexicana meets el Día de los Muertos in a municipal building, which is transformed for the evening by an army of paper mâché skeletons sporting rifles and sombreros and a large sand mural commemorating the anniversary. 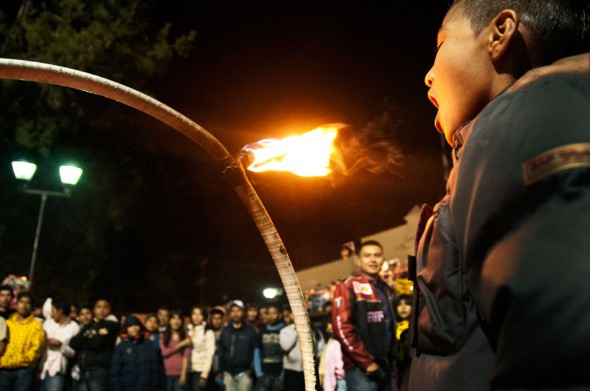 Blow Out: A street performer wraps up a show of fire juggling and hula hooping in the zócalo.

In Guanajuato, one can visit the Museo de Momia, where the mummified remains of hundreds of people dug up from the local cemetery—including babies—are on display. (The relatives of the cadavers were unable to pay rent on the graves.) We have visited more places where people were killed in this country than we have places where people achieved great things: Trotsky’s study, where he received an ice axe to the head; Hacienda Chinameca, where Zapata was shot; the railway tracks near San Miguel de Allende, where Neal Cassady is said to have died one drunken evening while counting sleepers on his way out of town. (According to local and literary legend, his last words were: “Sixty-four thousand nine-hundred and twenty-eight.”) Death is splashed across the headlines here and not only because of the cartels up north: every local rag sports a weekly lift-out of police stories, with every instance of death from car accident to cardiac arrest depicted in close-up photographic detail. And then there is el Día de los Muertos, the night when families stake out the graves of loved ones whose spirits are said to come back to remember what it felt like to be alive and to live, summoned, like those restless souls in Fantasia‘s famous final sequence, back from the other side. 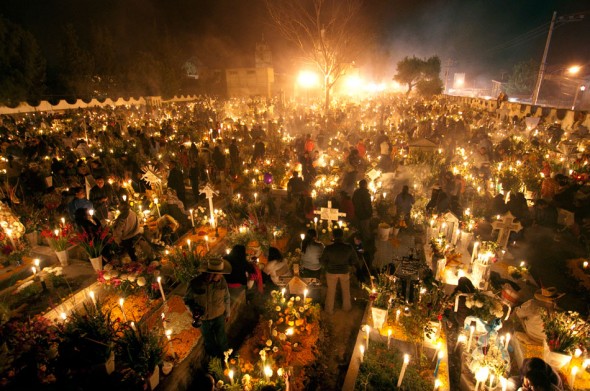 The Cemetery: Hundreds of people—locals and tourists alike—pack the cemetery behind Mixquic's Church of San Andres Apostal. The air thick with copal incense and the gravestones bright with floral arrangements, the church grounds will remain aglow in candlelight long after those not keeping vigil until dawn have retired, affording those who are staying on some peace. 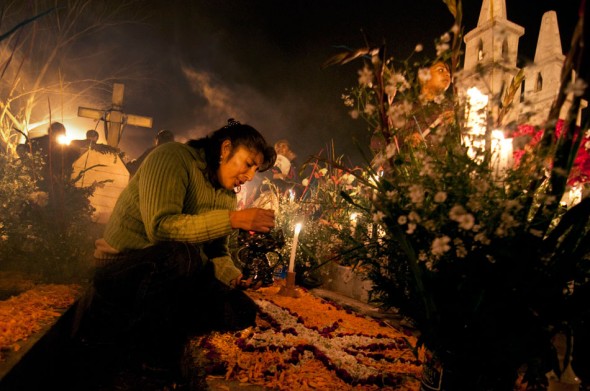 Shadow Crucifix: A Mixquic woman lights a candle at the grave of a loved one, which has been elaborately decorated with flower petals arranged in the shape of a crucifix. While religious designs predominate, one is liable to stumble upon the occasional death-themed or skull-shaped arrangement, too. 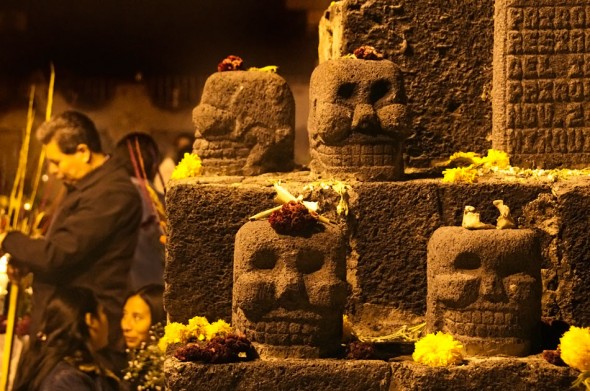 Headstones: Festooned with flower petals and burnt-down candles, a series of grinning representations of death adorn the large grave site in the centre of the cemetery. 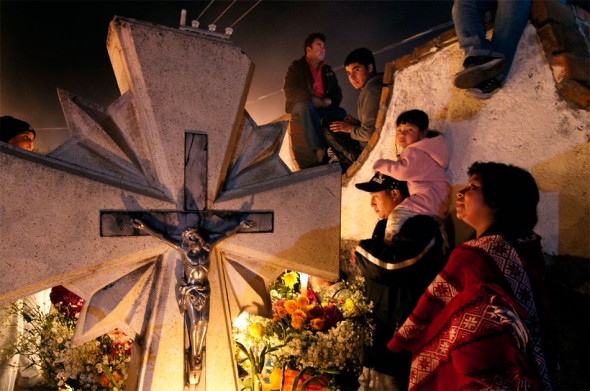 So That Our Sins May Be Forgiven: A family, a few of its members perched on the cemetery wall, keeps vigil at the grave of a loved one. 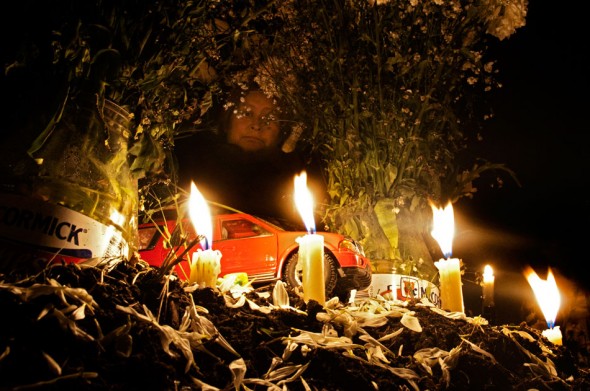 A Toy Without a Child: A woman looks upon the grave of a child that has not only been decorated with the standard-issue flower petals and candles, but also with a toy car. One of the most striking things about the cemetery is the number of children buried in it. 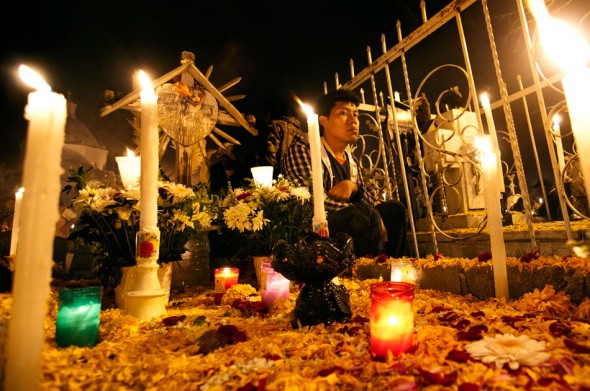 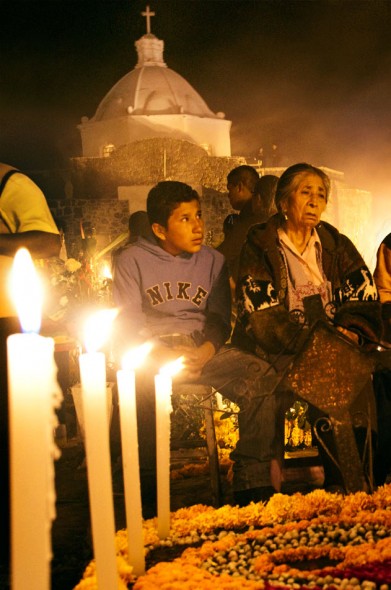 Late Mourning: The dome of the Church of San Andres Apostal looming behind them in the darkness, a young boy and an old woman sit together alongside a grave that sports a particularly elaborate, skull-shaped floral arrangement. 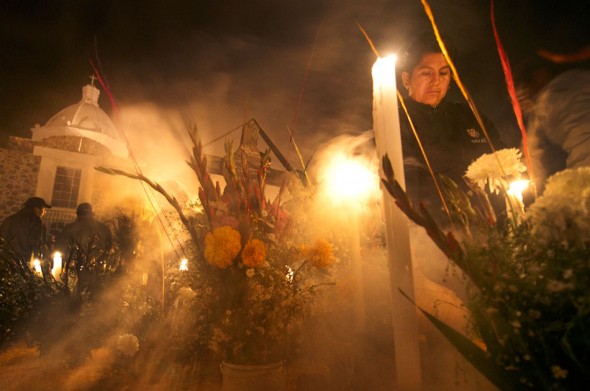 Spirited Away: Copal incense fills the air in the front section of the church cemetery. 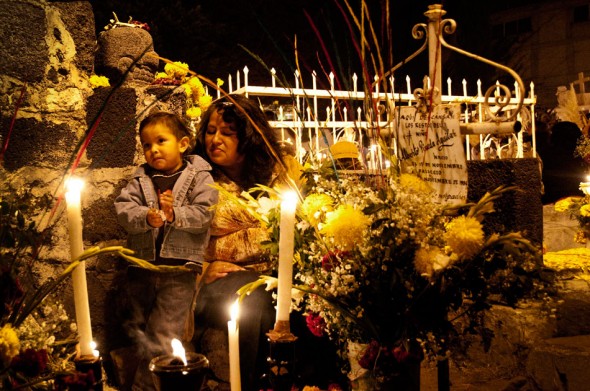 Mother and Son: Unlike those of some other countries, Mexican children are not urged to shy away from death, but rather play an active role in el Día de los Muertos celebrations (not merely those aspects of the holiday that have been influenced by Halloween, either.) Indeed, there are countless toddlers and young children at the cemetery, decorating graves, lighting candles, and keeping vigil with the adults. At least when they're not busy trick-or-treating. 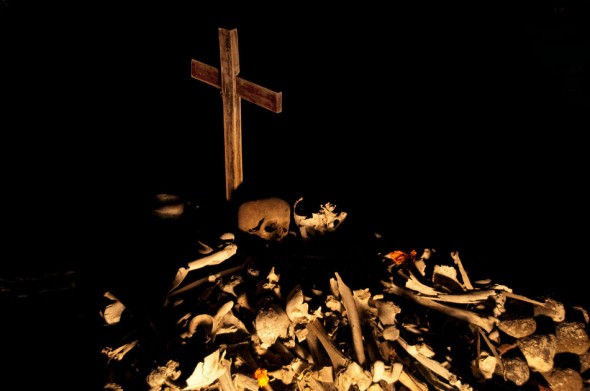 The Middens: A pile of bones sits beneath a crucifix as part of a display in the inner courtyard of the church complex.

If this seems at all morbid to certain tastes, it is perhaps worth remembering that taste is cultural. In fact, after a few months in this country, one might be forgiven for feeling that there’s actually something much healthier about the Mexican’s relationship with death—or at least, with certain aspects of it—than there is about the Anglo-American’s. Pretending that death doesn’t exist in order that one might avoid thinking or talking about it merely affords it unwarranted power: that of the taboo. The Mexican, by contrast, refuses to be owned by death, refuses to be consumed by it: rather, he raises himself up to its level, looks it directly in the eye, and, finding he is no longer afraid, is able to do the same with life.