Mexican Catholicism is a fascinating thing. On the face of it, the burning bush is more or less recognisable, but inside the thicket, and down amongst the roots, one comes across some less familiar elements. This is a country that has rendered the Church and its teachings fluid and adaptable, marrying the Gospels to indigenous ritual and belief, and breaking out beyond received doctrine in a manner that is generative, creative and relevant. Take the Mayan Church of the Talking Cross, which combines Christian iconography with an ancient animism, or el Día de los Muertos, which combines pre-Hispanic ancestor worship with Europe’s All Saints Day. Then there is Santa Muerte, Saint Death, who the Vatican neither canonised nor approves of, and who is venerated in Ciudad de México’s most infamous barrio, Tepito, on the first day of every month. All three are fine examples of Mexico’s culture of Kustomisable Katholicism, but the third is the most recent and, to outsiders, arguably the most fascinating. It is also the only one of the three that doesn’t use Catholicism as a mere cover for an indigenous core, but rather synthesises the two traditions, emerging out of and taking its place alongside both as a kind of present-day Gnostic alternative. The Anti-Guadalupe, Santa Muerte is said to have gained prominence in Ciudad de México in the 1940s, especially in the city’s less well-to-do barrios, though it was not until 2001 that el Santuario de la Santísima Muerte in Tepito was founded, giving the black lady’s worshippers their first holy site. Señora de las Sombra, Niña Santa, La Flaca. Whatever they call her, Santa Muerte gives residents of the beleaguered barrio a patron to whom they pray with a request specific to the neighbourhood: please don’t allow me or my loved ones to die, to be shot or killed, to be stabbed in the street. (Of course, criminals pray to her, too, before committing their offences, and, to the thin one’s credit, she does not discriminate.) Where the Virgin represents purity, the skeletal icon represents hedonism, excess and vulgarity: she is a Capitalist saint, a saint of bullets and bling, a saint who takes her offerings in the form of cigars and marijuana and tequila. One could imagine her emerging from the South Side of Chicago or Sydney’s western suburbs—indeed, anywhere poverty is combated with wish-thinking and gang culture—just as easily as she has out of the barrios. Or rather one could if the United States or Australia had religious traditions even a fraction as plastic. 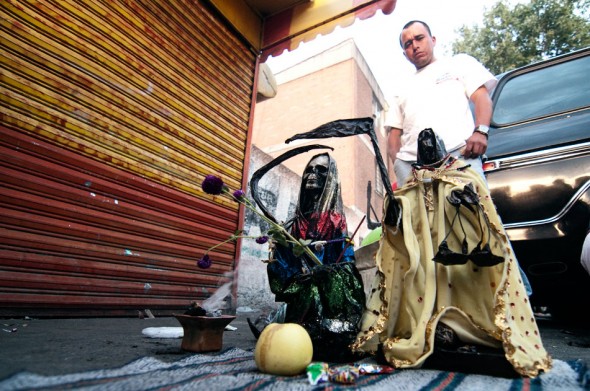 Images of the Saints: Bringing their representations of Santa Muerte with them—statues, paintings, posters, tattoos—Tepito locals flock to el Santuario de la Santísima Muerte for the monthly veneration of the saint. On the first day of every month, Enriqueta Romero Romero, the sanctuary's founder, leads worshippers in a saying of the Rosary, which lasts for about an hour. 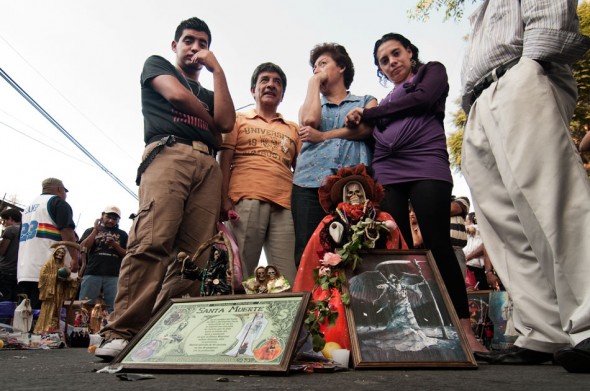 The Family That Prays Together, Stays Together: A Tepito family stands with their small collection of icons. Today's gathering is particularly important: people are here, not only for the monthly veneration of Santa Muerte, but also the ninth anniversary of the sanctuary, which was the first of its kind. It consists of a public altar and a life-sized representation of Santa Muerte, both visible from the street, the latter wearing a bridal gown and festooned with pieces of jewellery presented as offerings over the years by the faithful. 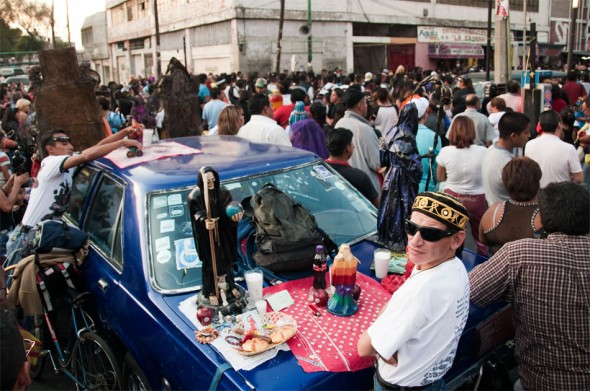 The Tepito Congregation: Roughly five thousand people attend the annual anniversary of the sanctuary. Instead of incense, the air is thick with marijuana smoke—some particularly potent local strand if the bloodshot eyes of the smokers are anything to go by—and, instead of Holy water, the streets are wet with Corona and Don Julio. The faithful feed their alcohol to the statues, tipping bottles up against skeletal grins and watching the contents run down empty rib cages. 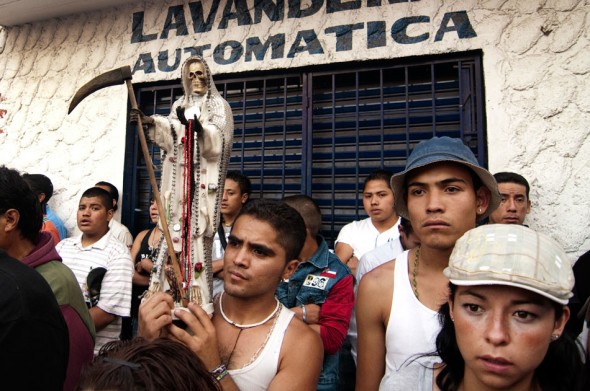 Grim: Worshippers stand against the wall opposite the sanctuary during the saying of the Rosary. Although the praying goes for an hour, and although the Rosary, by its nature, is very repetitive, the faithful never once flag: their voices remain strong, and they remain standing, for the full sixty minutes. 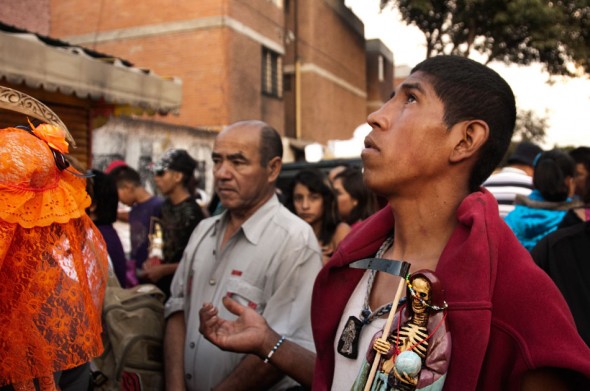 Rapture: One of the faithful, Santa Muerta at his breast, looks to the heavens during the saying of the Rosary. 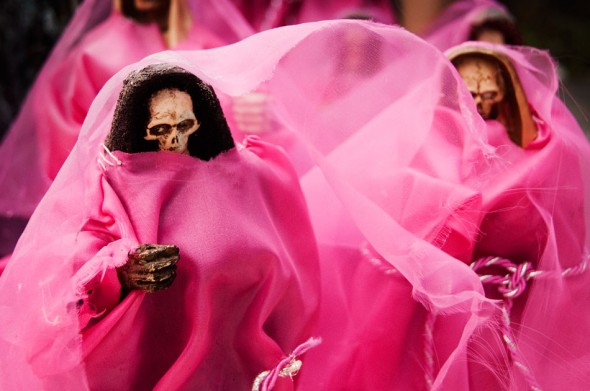 Flossy Reapers: Statues of Santa Muerte clothed in pink—representations of the figure are characterised by their elaborate, often garish, garb—stand together in a group. 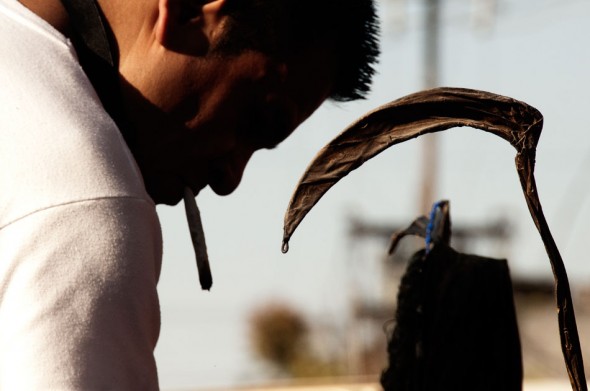 Cigar and Scythe: A giant spliff protruding from his mouth, a Tepito local stands with his back to the setting sun. His Santa Muerte's home-made scythe has been built out of wire and tape. 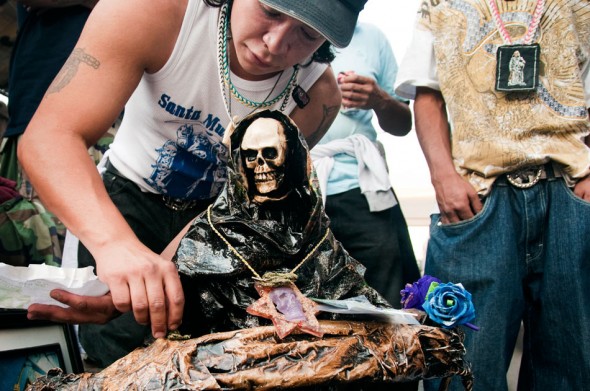 Herbal Offerings: Clad in a Santa Muerte tee-shirt and sporting another representation of the figure on his arm, one of the faithful delicately deposits a handful of marijuana buds before a statue of the saint. 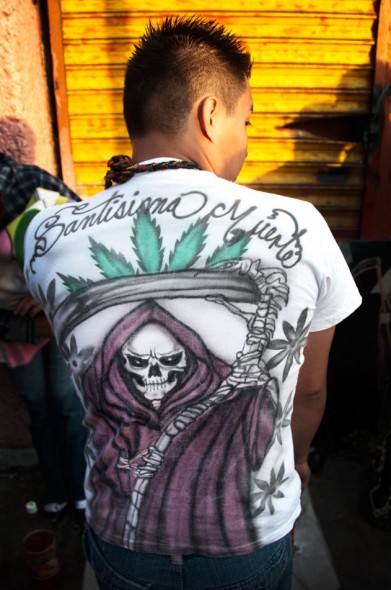 You Think You Know Fashion: A huge number of the faithful—more of them than not, in fact—sport items of clothing and tattoos depicting Santa Muerte's image, further suggesting the centrality of the figure to daily life here in Tepito. 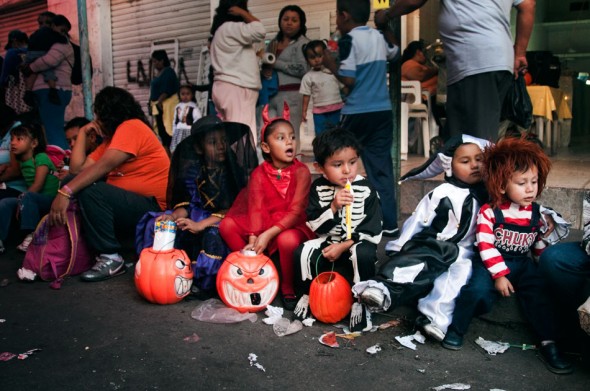 Trick-or-Treat: November 1 is not only the anniversary of el Santuario de la Santísima Muerte: it also the day after Halloween and the day before el Día de los Muertos. Mexican children benefit hugely from the six-day celebration that culminates on November 2, appearing in costume from October 28 and trick-or-treating everywhere they can until the holiday season is over. They approach random people on the street and couples dining at tables in restaurants. And they are happy to accept money when candy is not forthcoming.