El Albergue Jesús el Buen Pastor de Pobre y el Migrante, the Shelter of Jesus the Good Shepherd for the Poor and Migrant, is for many of those who begin the journey from Central America to the United States the place where that same journey comes to an abrupt end. As Estuardo headed north on the Arriaga-Ixtepec, Amiel, who we’d met only a week before, was still getting used to the prosthetic right leg that his own tilt at the American Dream had resulted in. On his bed in a sparsely-furnished dormitory, Julio fingered the bandages on his abdomen where, in the same town that hundreds of indocumentados were now hurtling towards at forty kilometres an hour, he had been attacked with impunity by three men with machetes. And el Albergue Jesús el Buen Pastor clearly had its own problems, too. Increasingly a must-visit destination for those who, like us, are covering Central American migration, the shelter has not seen the increase in coverage translate into a similar increase in funds, operating on fiscal fumes while some of its walls literally crumble around it. (They were, after all, built by the residents themselves, some lifting and laying bricks one by one with the only hand they had left.) An abrupt end, though, is better than a dead end: it includes within it its opposite, the possibility of starting again. Which is why Julio is still planning to head north the very moment his wounds have healed. And why we suggest that those of you who are able donate to the shelter here. 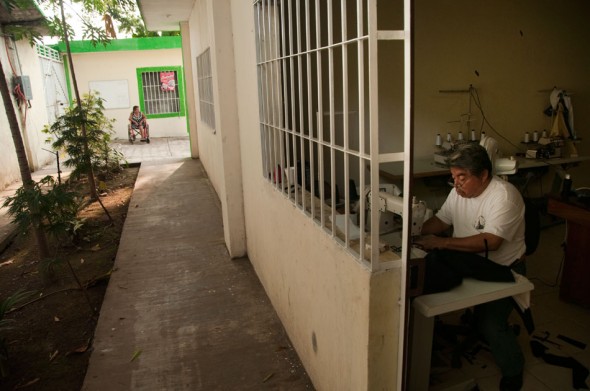 One Leg in the Distance: El Albergue Jesús el Buen Pastor de Pobre y el Migrante. In the foreground, the shelter’s sewing workshop, one of several areas in the complex dedicated to further education and the development of practical skills. (The sewing workshop produces sheets, blankets and pillowcases for the shelter’s dormitories, as well as for outside sale. English and computer classes are also available to residents.) In the background, Fidelina, one of the shelter’s current residents, sits in the fading light of day. Our guide, Elmir, a volunteer who was educated in the United States but originally hails from Cancún, says the shelter houses anywhere between thirty to fifty people at any given time and costs nearly one hundred thousand pesos to operate each month, with sales from the sewing workshop and on-site bakery providing “very little but enough to help”. “We’re not dependent on the government,” he says. “We mostly get by on donations.” 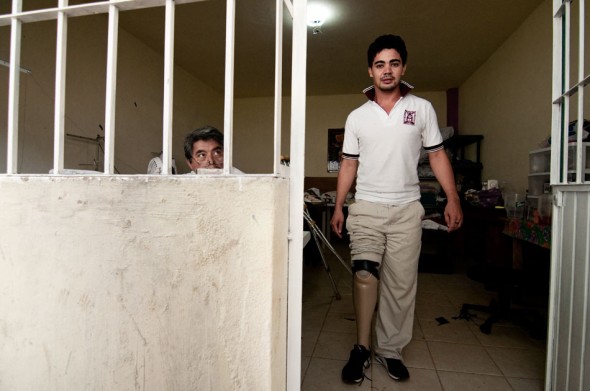 Amiel: On June 23, Amiel hopped a freight train north from the south-eastern state of Tabasco, where many indocumentados have been beginning their journey since Hurricane Stan destroyed the line between Tapachula and Arriaga in 2004. But instead of making it to his next destination, the twenty-year-old Honduran fell, damaging his leg in the process. He had it removed a month a later and has been recovering at the shelter ever since. “Emotionally it’s been hard,” Amiel says. “I have learned a lot about life.” 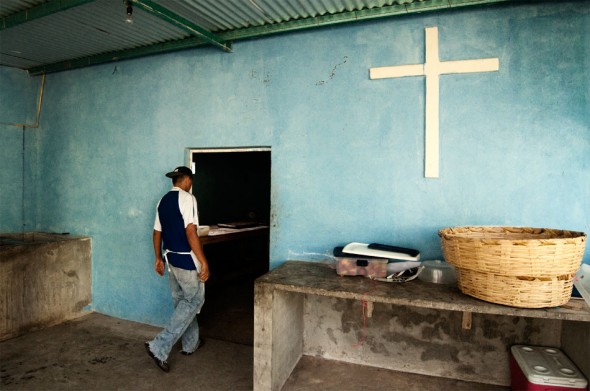 Crucifijo Blanco: El Albergue Jesús el Buen Pastor’s on-site bakery. The crucifix on the wall is one of the few signs we see in the complex of the shelter’s religious roots. Having experienced a number of serious illnesses in her own life, Olga Sánchez Martínez, the shelter’s founder, started visiting Central American migrants in hospital after they had fallen from the various freight trains north or else found themselves the victims of criminal violence. Realising how vulnerable these indocumentados were, and believing it was God’s wish that she help them, Doña Olga, as she is affectionately known, started begging in the street to raise funds for the medicines, crutches and other necessities the migrants could not afford themselves. Having cared for a number of indocumentados in her own home over the years, Doña Olga established el Albergue Jesús el Buen Pastor in 1999. Elmir insists that the shelter’s vision is more ecumenical and humanist than it is strictly Catholic, however. “We certainly don’t discriminate,” he says. 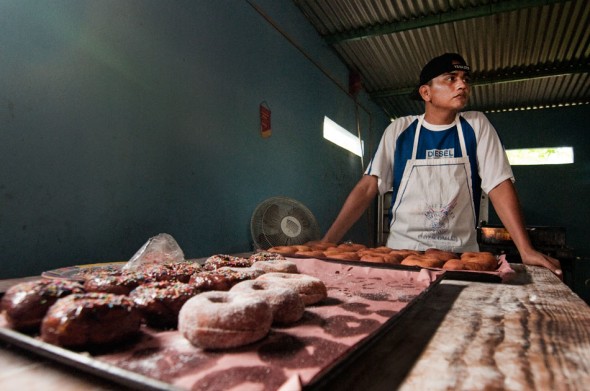 The Best Doughnuts This Side of the Guatemalan Border: The shelter’s on-site bakery produces bread for the residents and doughnuts for sale. Elmir tells us that he spends much of his time outside the shelter peddling the bakery’s wares on street corners. 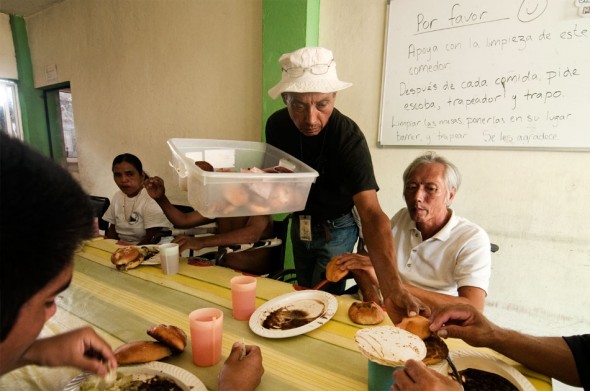 A Communal Dinner: Bread rolls from the bakery are passed around at the five o’clock dinner service. Residents enjoy three meals a day, with the majority of the shelter’s foodstuffs donated by local businesses. The same is true of much else in the complex: the medicine boxes in the well-stocked clinic, which is manned by a single nurse but no doctor, have all been donated, as have the crutches, wheelchairs and prosthetic limbs used by many of the residents. 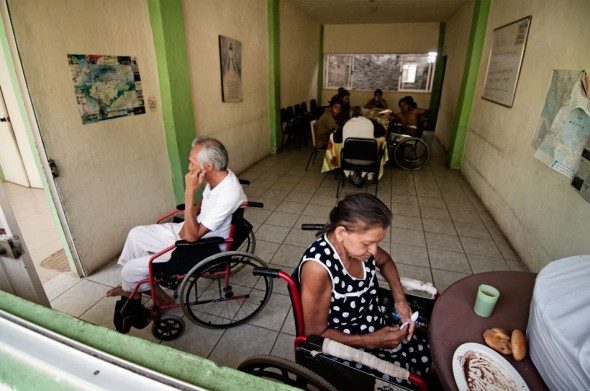 Six Wheels: While the rest of the residents eat at the main table, Fidelina sits quietly at the window, eating by herself. Behind her is Allen Cheng, an elderly stroke-victim who arrived at the shelter eighteen months ago, unable to speak and suffering from amnesia. He claims now to be a Canadian citizen, though he still can’t remember if he has family in that that country and certainly has no documentation to prove to the authorities he’s from there himself. He describes the effects of the stroke—which he can’t remember either—as a “total bye-bye”. He is one of a number of foreign nationals to have passed through the shelter: this year, a US citizen spent seven months in residence, while a French victim of assault spent part of February recovering at the complex. 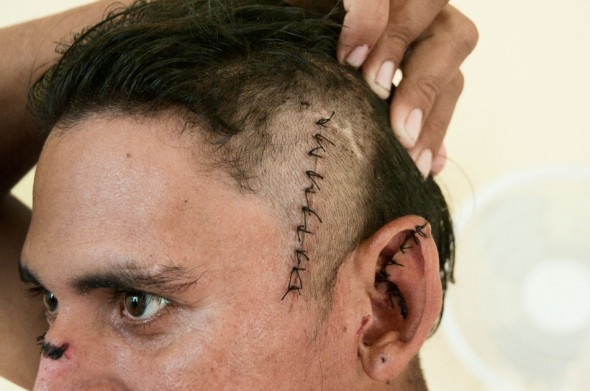 Julio: Julio arrived at el Albergue Jesús el Buen Pastor the day before our visit, less than a week after he was attacked in Ixtepec, Oaxaca, a key destination for those heading north. The thirty-one-year-old El Salvadoran was loitering around the tracks, waiting to hop the train next train north, when he was stabbed in the back, the wound puncturing a lung. He turned to discover three men armed with machetes, with which they proceeded to attack his face. Instinctively, Julio lifted a hand to defend himself and grabbed one of the machetes before it could strike him. His hand is now criss-crossed with aggressively stitched scars. 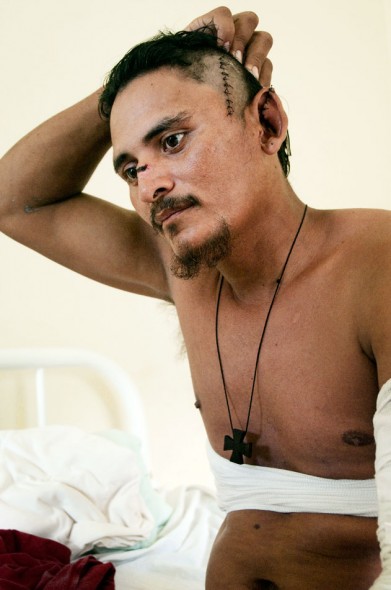 Scars: Julio continued to defend himself against his aggressors, but became scared when he felt his legs giving way beneath. “I started running when I realised I was going to die,” he says. Bleeding from his face, back and arms, and struggling to breathe, Julio made his way to a local bar, where the proprietors called the police and ambulance. He was rushed to Juchitán de Zaragoza, about forty minutes away, and was relocated to Tapachula after his condition had stabled. Despite his wounds, Julio maintains that he will attempt to reach the United States again once he has fully recovered. “Life in El Salvador is too hard,” he says. He will take exactly the same route. 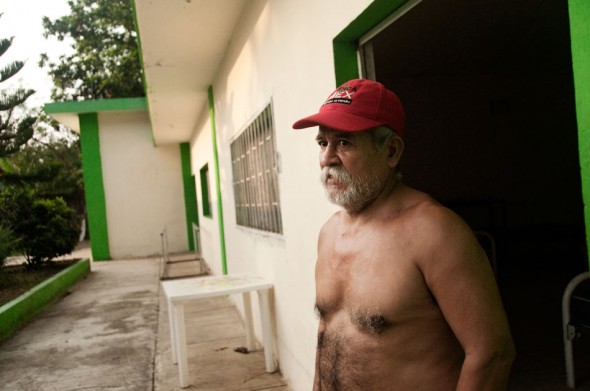 Eliseo: Sixty-year-old Eliseo has lived at el Albergue Jesús el Buen Pastor for eleven months, arriving not long after he started going blind a year ago. Working at a Mexican furniture company in order to bankroll his eventual move to Canada, Eliseo had an accident that alerted his employers to his decaying eyesight. The El Salvadoran consulate was notified and he’s been living at the shelter ever since.

The Weaver: Eliseo now spends his day weaving baskets, a task as reliant on repetition as it is on vision. While he says he misses El Salvador, he also insists that he can’t go back. Before losing ninety-five percent of his eyesight, Eliseo was proficient at carpentry and construction work and had worked as a driver. Now, he says, no employer would have him. “It would be shameful to go back with less than I came away with,” he says. 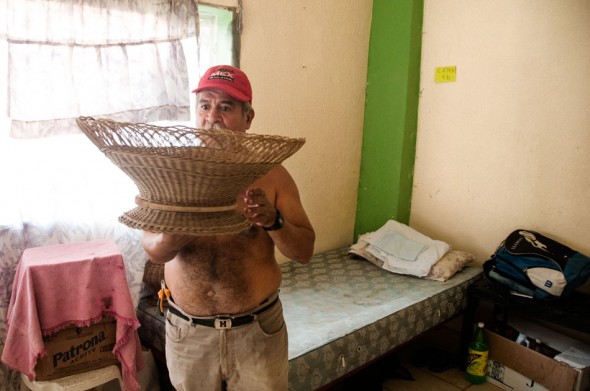 Taking Pride in One’s Work: Eliseo shows off one of his many baskets, his threadbare bed behind him. With an optometrist appointment scheduled for next month, he insists that el Albergue Jesús el Buen Pastor is the best place for him, at least for the time being. “If I knew I could get medical attention in El Salvador, I would go back,” he says. “But I know that will never happen.” He’s not staying in Mexico because he can get the best help here, but because he can get help, period. 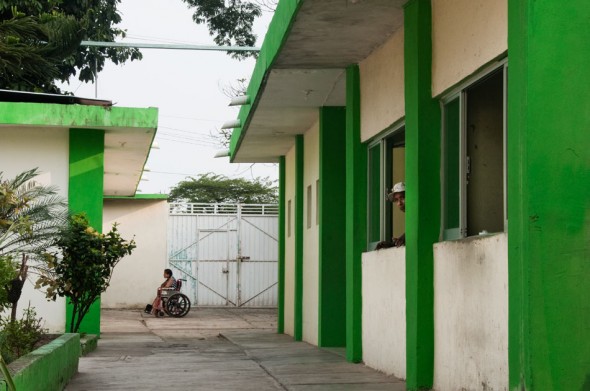 Off-White and Green: A resident eyes the camera from the dining room window while Fidelina sits in the middle of the yard, watching a soapy telenovela through the door of the television room. 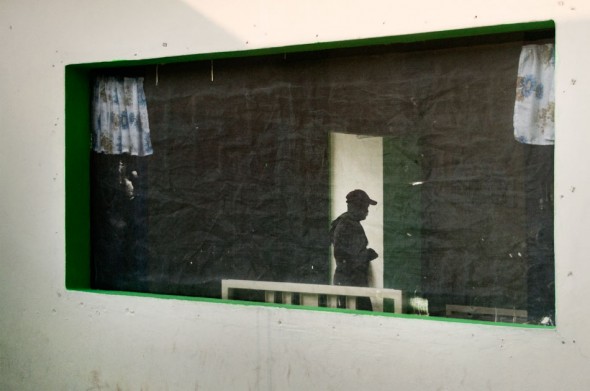 We’ll Become Silhouettes When Our Bodies Finally Go: Eliseo appears in the doorway of his dormitory, viewed through a veil of wire meshing that serves as both the room’s window and its curtain. “He doesn’t see people anymore,” Elmir tells us. “He only sees shadows.” 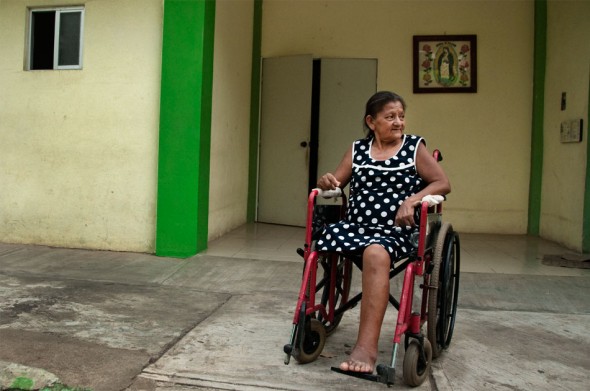 Fidelina: While nine out of ten of the shelter’s residents are migrants, the occasional local makes her home here, too. Fidelina is one such local: after losing her leg to gangrene three months ago—a leg, she says, she sometimes still feels—her family decided the best place for her was somewhere she could get proper help. 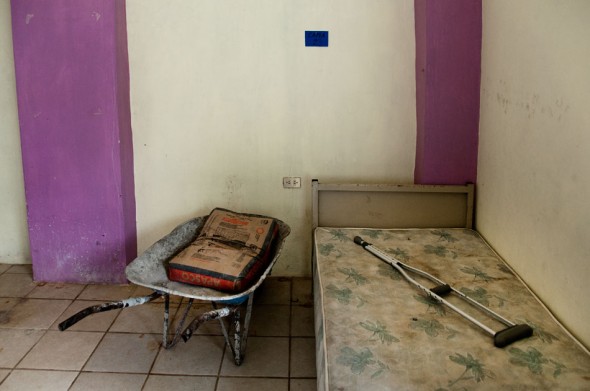 Symbolic Reminders: A wheelbarrow and a bag of concrete, a reminder that the shelter is an eternal and underfunded work-in-progress—a shed out the back is to become another dorm, we are told, and has been set to become one for quite some time now—sit next to a single crutch, left behind, perhaps, by the room’s last resident. 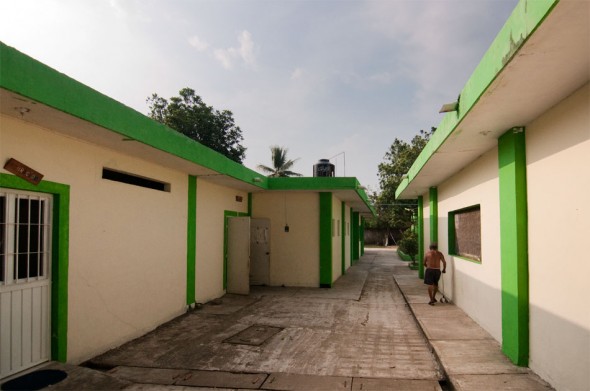 An Early Night: One of el Albergue Jesús el Buen Pastor’s residents makes his way back to the male dormitories as the sun lights up the eastern wall of the complex. Everyone begins to disappear from the courtyard not long after dinner has finished, retiring to either the television room or their beds, waiting for night to fall.