If a man, in all likelihood, will be dead within a week, and both you and he are aware of the fact, how do you speak with, engage with, be with him? It seems to me you have two options, both of which entail an acknowledgement of the likelihood. One can laugh in the face of it, engage with the man, live one day and the next like there’s no tomorrow because there may well not be. Or else one can withdraw, keep one’s distance, gracefully yet firmly decline intimacy in the knowledge that the lack of tomorrow will make any attempt at connection emotionally hazardous at best and misleading to the befriended at worst. The one nihilistic, the other pessimistic and selfish, both are preferable to any naïve attempt to wish the statistically inevitable away: if the vast majority of migrants are kidnapped or killed, repatriated or deported, en route from the southern border to the north, then maybe eight or nine out of these ten men we have befriended will never see the Rio Grande. Or perhaps there is a fourth way: a way that acknowledges the odds but hopes against them, a form of what has recently come to be known as critical optimism. One can encourage the impulse towards fight and acknowledge the appeal—if not the likelihood—of success. But then sometimes optimism can appear wilfully naïve, too, and encouragement can merely encourage false hope. And so we bought the migrants forty tacos instead. Sheet lightning chased them up from the south-west. 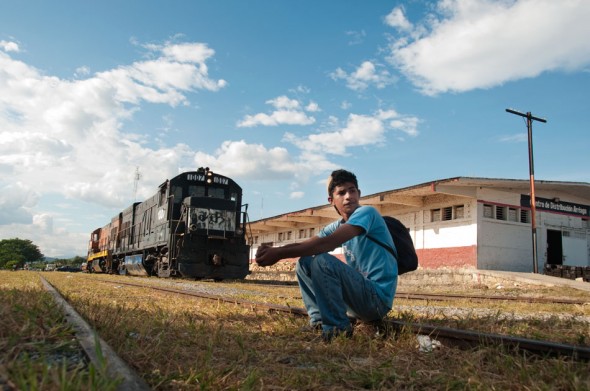 Departure Time Unknown: Estuardo sits on the train tracks with the Arriaga-Ixtepec freight train in the background. The day has finally arrived for him and the other migrants to head north, although no one knows when that might happen. The train arrived at five o’clock yesterday evening but, despite a lot of movement at the station, has shown no sign of leaving this morning or even this afternoon. 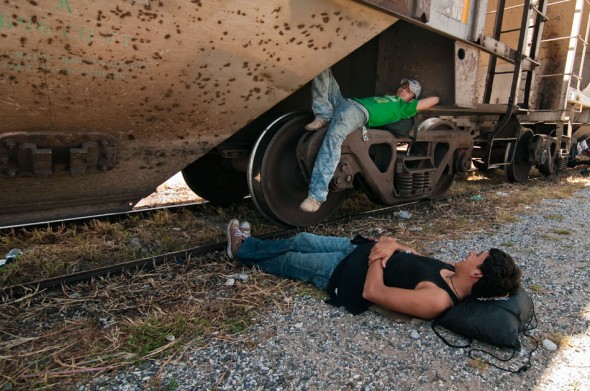 In the Shadow of the Hoppers: Two indocumentados relax alongside the stationary railway cars that later, when the train finally shows some sign of moving, they will scramble up in search of the safest and most comfortable seats. 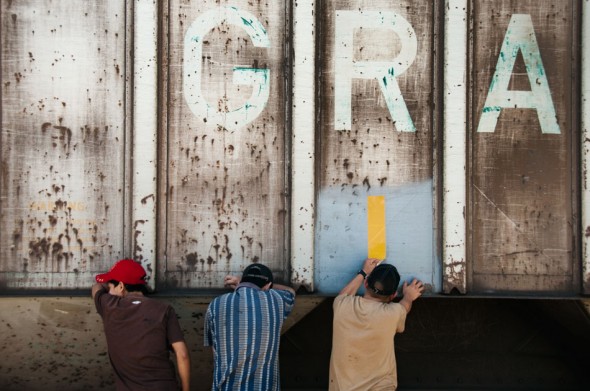 Gra(in): Three indocumentados lean against one of the grain hoppers, taking advantage of the shade they provide. Unlike the rest of Chiapas, which is Mexico’s most mountainous state, Arriaga is only fifty-five metres above sea level and the days here are hot and long. 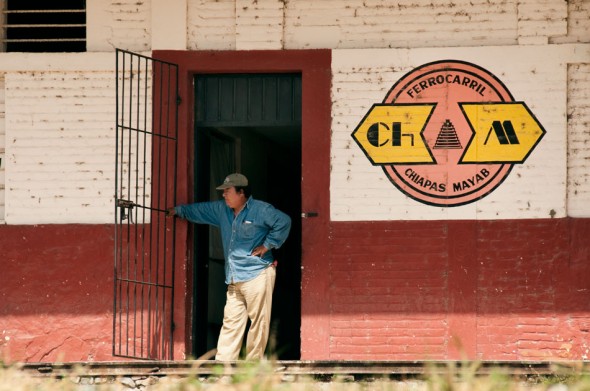 The Man from Chiapas Mayab: A railway employee stands at the door of the Arriaga station. 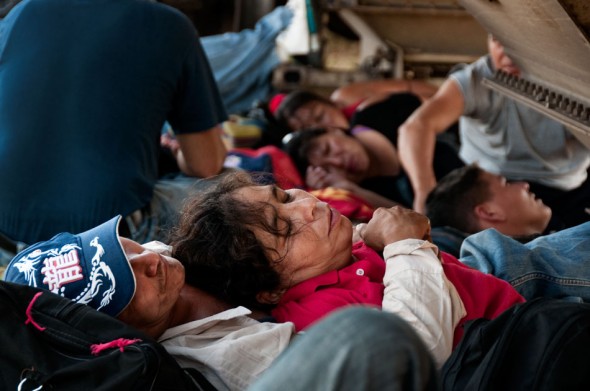 My Sweet Embraceable You: For much of the week we are in Arriaga, the vast majority of the indocumentados we meet are men. That begins to change after the arrival of the train, when more and more women—along with children the most vulnerable of those heading north—begin to appear on the tracks. Although measures have been introduced to improve protection for female migrants and unaccompanied children on the route, these groups still remain highly susceptible to sexual assault and people trafficking, often at the hands of public officials. Some believe the problem to be even greater than official data would suggest, with many women reluctant to report or talk about sexual violence. 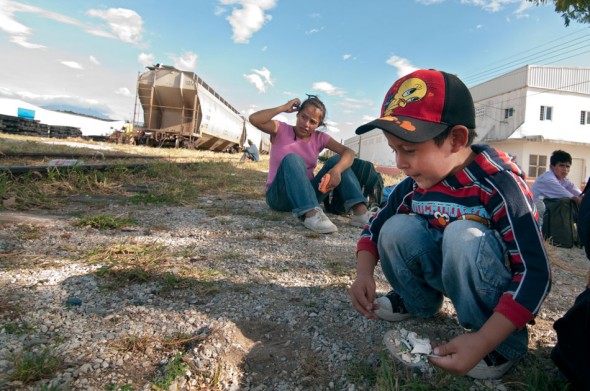 El Niño Cocinero: A four-year-old Guatemalan boy, his mother watching him as he plays, gathers unique-looking rocks and tufts of grass, which he labels as though they were types of food. A rounded stone becomes “una naranja,” an orange; another is “una fresa,” a strawberry. A discarded bottle cap becomes a cup of “leche,” milk, which he proudly presents to his mother for her to drink. 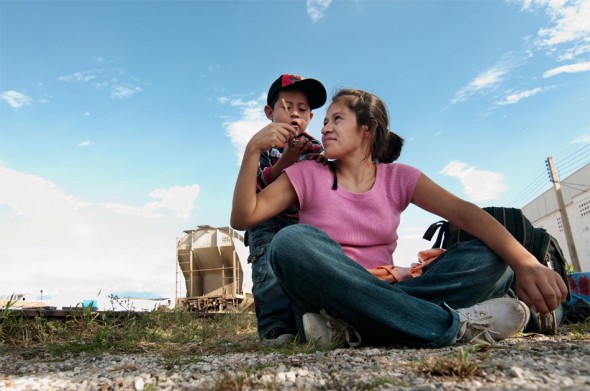 El Niño Camarero: The little boy presents his mother with a plate of “food”. She happily plays along, pretending to eat the assorted miscellany and reacting positively to how well it has been prepared. 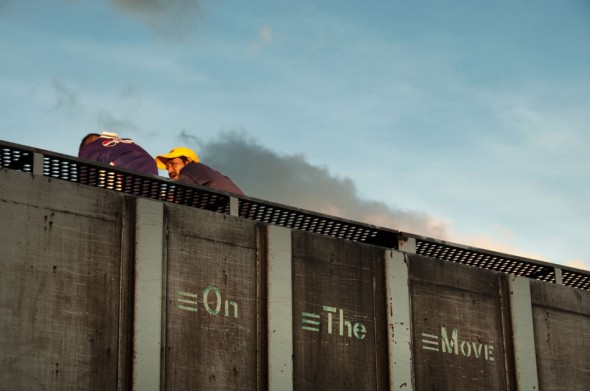 On the Move: Two indocumentados sit atop one of the boxcars, waiting for the train to leave. 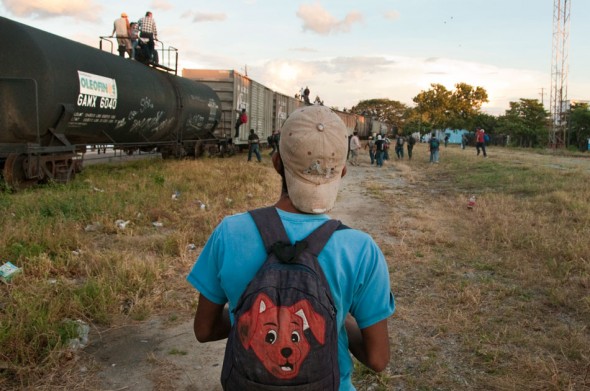 The Search: It is late afternoon when a number of freight cars are rolled across the bridge and in toward the station, sparking a frantic scramble for seats. Estuardo walks along the length of the train, seeking out the best position. 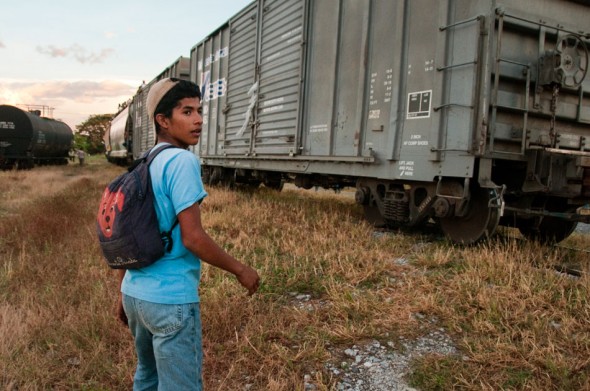 Which Way?: Estuardo contemplates whether to investigate the boxcars ahead or turn back the way he came. He wants to find a carriage with something for him to hold on to (the wind on top of the carriages is intense enough when they’re stationary, let alone when they’re going forty to fifty kilometres an hour). He also wants to make sure that he’s with a group of migrants he feels safe with. 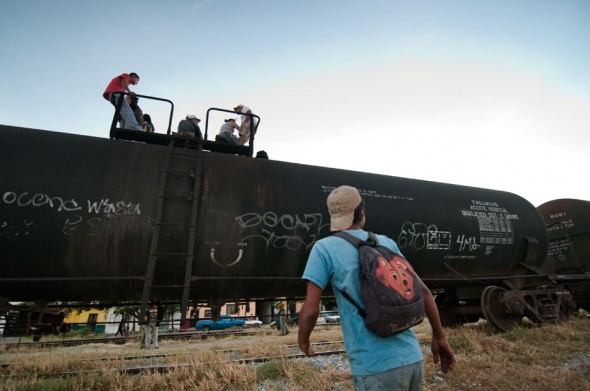 Selection Criteria: Estuardo heads towards a tank car to see if there is any room for another passenger. He road-tests three of four potential carriages before selecting one he is happy to ride on. 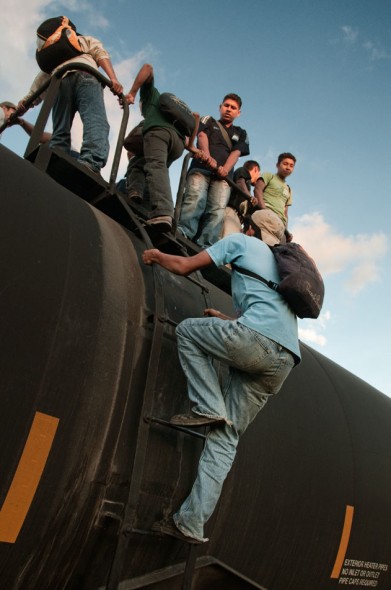 Onwards and Upwards: Estuardo climbs aboard one of the train’s tank carriages. 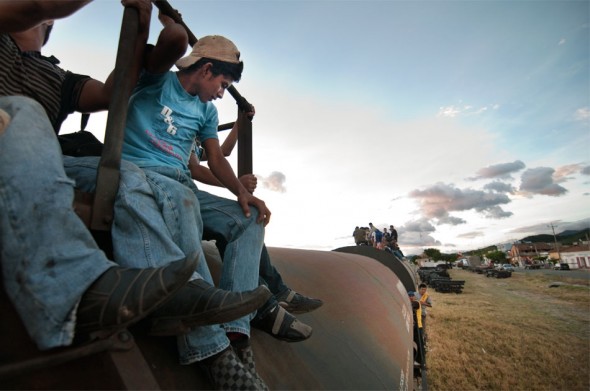 The Twelve-Hour Perch: One of the reasons seat selection is so important is that the migrants won’t be able to move or change position for another twelve hours. The journey is a long and labourious one: the bus ride between Arriaga and Ixtepec, by contrast, takes a quarter of the time. 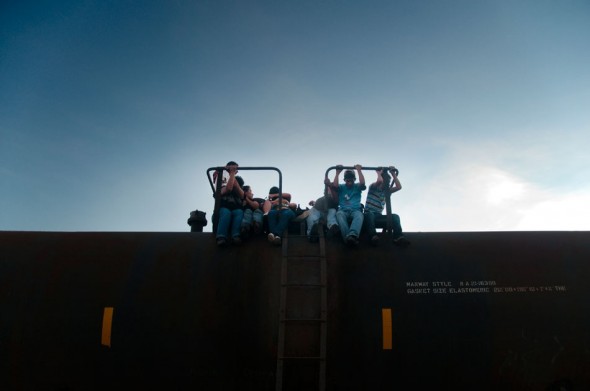 For Dear Life: Estuardo and his travelling companions sit atop their tank car waiting for their journey to begin. 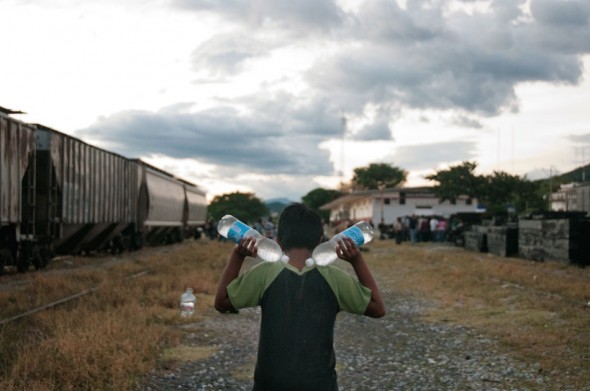 Agua: From the moment the indocumentados start climbing aboard the train, local vendors walk up and down its length, selling food and water. The migrants that have spent most of their week begging on the side of the road are able to stock up on provisions, though others deliberately choose not to. Estuardo’s backpack contains only a sweater and a bottle of water: if other migrants ask him for food, he explains, he will be able to tell them honestly that he doesn’t have any and perhaps avoid harassment. 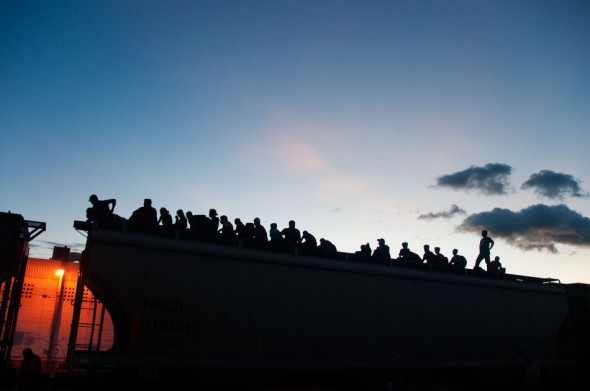 En Masse: As the sun sets on Arriaga, the indocumentados prepare for the long night ahead—and for the long couple of weeks that will follow it. While in many cases—Estuardo’s and Andres’s among them—the nervousness that characterised the previous evening has given way to a sense of excitement, it remains that the odds are against the migrants ever reaching their destinations. In a June 2009 report, Mexico’s Comisión Nacional de los Derechos Humanos estimated that as many as 9,758 migrants were kidnapped in a six-month period between 2008 and 2009, including one hundred and fifty-seven women and at least fifty-seven children. Almost all of these kidnappings took place along the various train tracks heading north and a great many of them involved the cooperation of public officials. 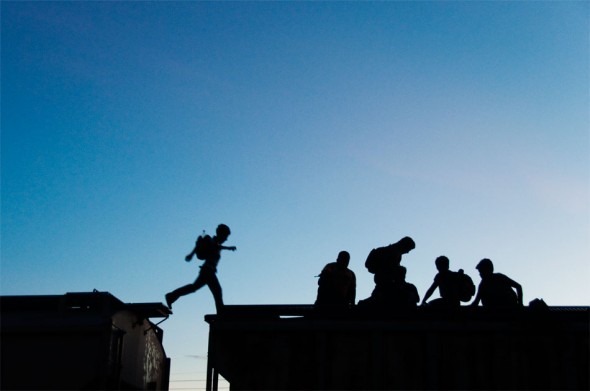 Skipping Silhouette: The risk of being detained by immigration officials remains at least as great as the threat of kidnapping. In 2009, 58,681 Central Americans were detained by Mexico’s Instituto Nacional de Migración and voluntarily repatriated or deported. With no accurate statistics on the number of indocumentados who enter Mexico in the first place, however, it is difficult to estimate how many of those we have met will ever make it to the northern border. 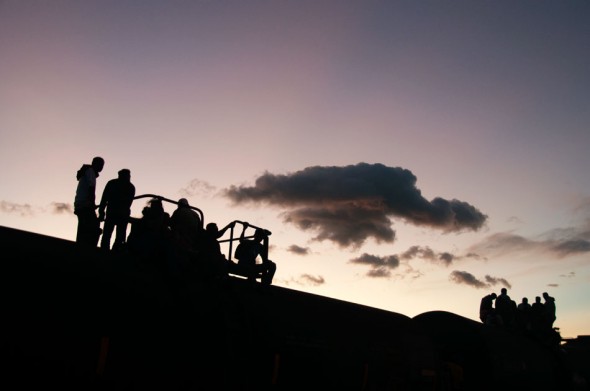 Waiting in the Half-Light: As the last of the sunlight disappears, the stationmaster is finally able to give us a departure time: at ten o’clock, he says, the train will be leaving. Though that is still three or four hours away, most of the indocumentados choose to stay on top of the train. The idea of giving up one’s seat or, worse, missing the train altogether is at this point unimaginable. 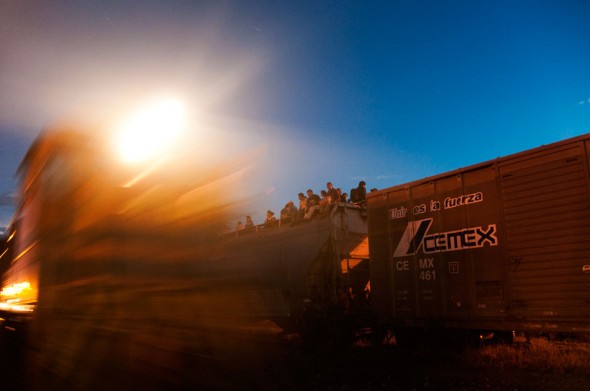 The Beast at Twilight: The train has been moving up and down the tracks all day, pushing and pulling the various boxcars, tank cars and hoppers into place for the evening’s service. It now moves to the head of the line for the final time: the next leg of the journey north is about to begin. 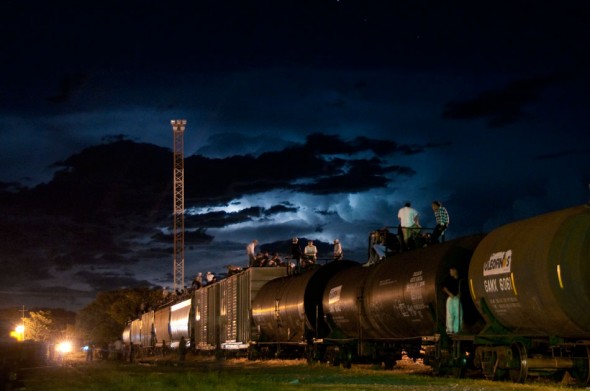 Farewell: As the Arriaga-Ixtepec finally pulls out of the station, sheet lightening begins to light up the sky. Austin and I stand near a pile of sleepers and wave goodbye as the train rolls by. The indocumentados wave back excitedly, shout out farewells in Spanish and English, and even in a couple of cases blow kisses. The mood on the train is one of nervous anticipation: the train is a direct route into an uncertain future. It would be silly to read the weather as an omen of any kind, but as the train disappears past the silos at the northern edge of town one can’t help but wish that the night had been calmer. The next twelve hours are going to be difficult enough.

Part III in this series, “The Good Shepherd”, will be posted here on Friday.