You see signs of it all across the country. A collection of specially-minted coins proudly displayed in a shopfront window. The new clock tower in Arriaga, built to mark the country’s upcoming centenary as well as the city’s own hundredth birthday. (Its bell tolls the Mexican national anthem every morning at six o’clock, disturbing the illegal migrants asleep on the nearby rotunda.) In Quintana Roo’s Felipe Carrillo Puerto, formerly Chan Santa Cruz, the capital of the Maya Free State, we happened upon a group of young people rehearsing for the celebrations. “What is the rehearsal for?” I asked in my rudimentary Spanish. “The concert,” one of the boys replied in his equally rudimentary English. “When is the concert?” “20 de noviembre.” “Para la Revolución?” “Sí.” Though the division of labour was not strictly along gender lines, as a general rule the girls wielded the drums while the boys commandeered the bugles. They ran through drills in the shade of a tree in a park near the former Mayan temple of Balam Na—which was built by the town’s indigenous inhabitants, in an unusual inversion of the colonial tendency, with the use of Creole and European slave labour—until their instructor arrived and ordered them out into the oppressive midday heat of the square. As they marched back and forth and around in circles, blowing their horns and beating their drums, what was perhaps most striking to us was the youngsters’ level of skill. The Centenary of Revolution was still two months away yet already they put on an impressive show. Occasionally one or two of them would lose focus, when their sunglasses slipped on the sweat of their noses or their wrists got tangled in the cords of their bugles, but mostly they discharged their duty with impressive seriousness. But they were relieved when they were finally ordered to march their way back into the shade. 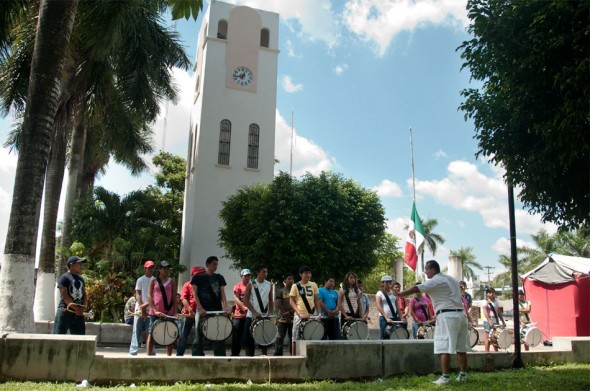 Atten-Shun!: A group of young people take instructions near Felipe Carrillo Puerto's zócalo. The Mexican flag in the background flies at half-mast in memory of the students and protesters murdered in the Tlatelolco massacre of October 2, 1968.

Into Formation: Following drills in the shade of a tree, the band members move to form two lines in the sun following the arrival of their instructor. 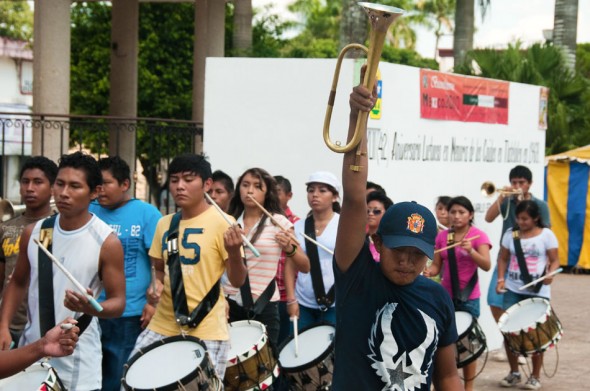 Follow the Leader: Marching at the head of the corps, the young bandleader holds his bugle above his head and leads the line away to his left. He flourishes the instrument as much as he plays it, spinning it around at an impossible speed and thrusting it forward as if to point out the way. 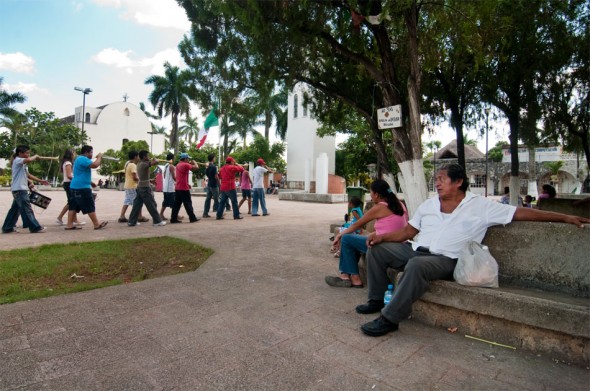 Anyone Got Anything They'd Rather Be Doing Than Marching Up and Down the Square?: Locals watch as the corps runs through its routine. The Mayan temple of Balam Na, which was built by slaves and is today the town's Catholic Church, is visible in the background. 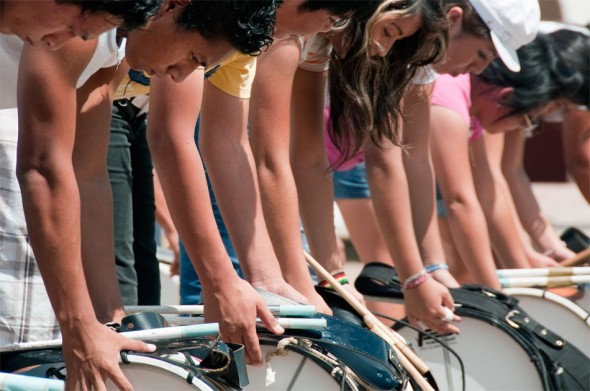 Compañeros in Arms: The line of drummers place their instruments on the ground in unison. 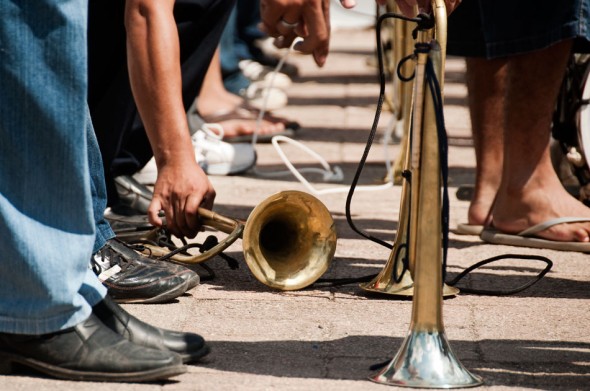 A Delayed Bugle: A bugler's hand rushes to straighten its instrument while the other musicians' stand at attention.