We hired a little black VW Beetle to take us out to the villages around Oaxaca, with their weekday markets of stringy, briny-tasting cheese, clear plastic bags of mole negro and mole coloradito, their sugar-crystalloid chocolate that seems to shatter in the mouth when you bite it, intensely-flavoured grasshoppers, and meat sections patronised by groups of hungry-eyed dogs. We drove the Beetle out to Villa de Etla, to Oaxaca’s north, getting lost on a highway that had no exits and making our way through the region’s backroads until we found the town. We tried fried grasshoppers, chapulines, for the first time and bought knock-off sunglasses for fifty pesos. We watched a mariachi band sing to the dogs and the pigs’ heads and were offered homemade mezcal in unlabelled bottles. Mezcal, tequila’s nasty younger sister, kicks like a mule and leaves bruises to prove it, as we learned all too well two nights later, when we had a drinking competition that resulted in hangovers that felt as though agave plants had taken root and were growing inside out stomachs. At another market, in Villa de Zaachila, we ate tortas and drank a mystery elixir that was said to cure arthritis, though the snake-oil salesman’s routine was interrupted when the rainclouds opened and the tents began to collapse under the weight of the accumulating water. We drank beer at a stall where they were cooking meat on a giant hotplate and watched as the live-poultry vendors fled the downpour, with the exception of one especially ancient woman, who looked like a figure in a Käthe Kollwitz etching and who had staked out a piece of prime real estate hours before, underneath a tree. 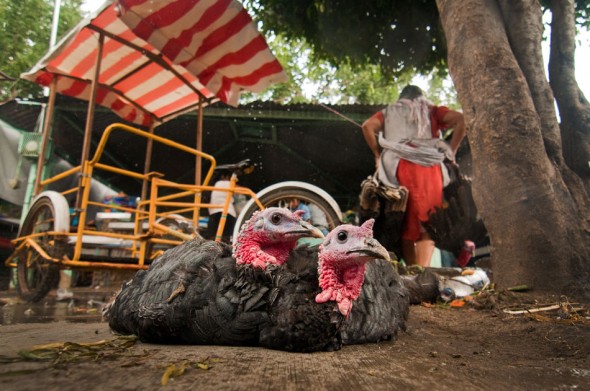 Turkey Shot: The last two birds at the Villa de Zaachila mercado huddle together in the aftermath of a downpour. 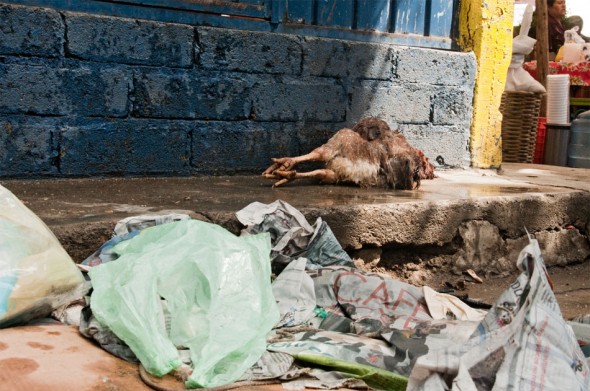 Left for Dead: A Villa de Zaachila chicken that was not so lucky when the poultry vendors fled the rain. 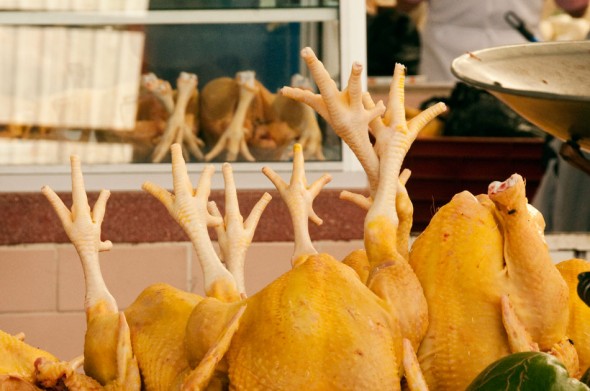 Everybody Put Your Hands in the Air: A group of Villa de Etla chickens that were arguably even less lucky. 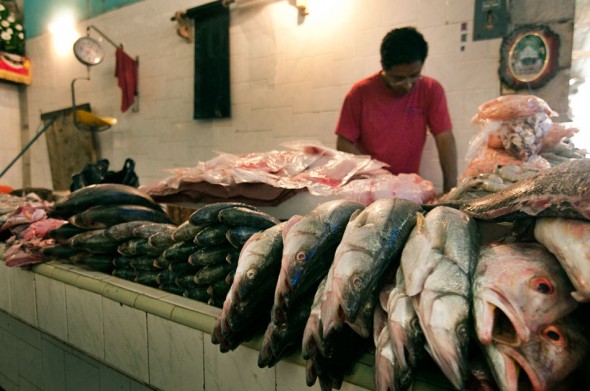 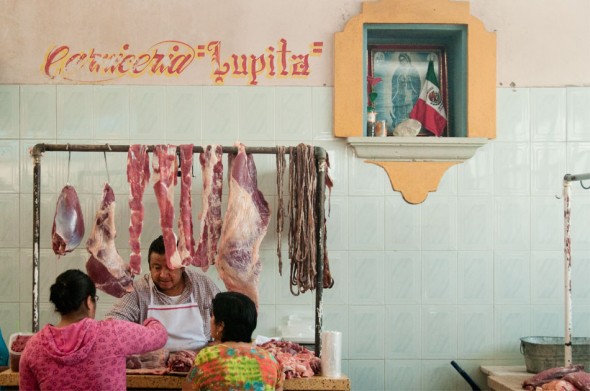 Blessed are the Butchers: The Virgin of Guadalupe watches over the Villa de Etla meat vendors. 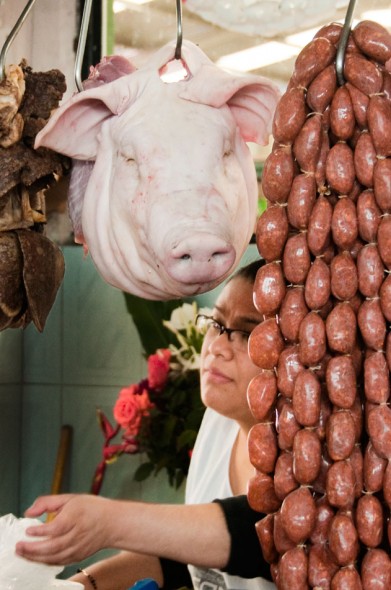 Some Animals are More Equal Than Others: Perfect for soup, a pig's head hangs above a Villa de Etla meat stall, eyes closed, eerily human. 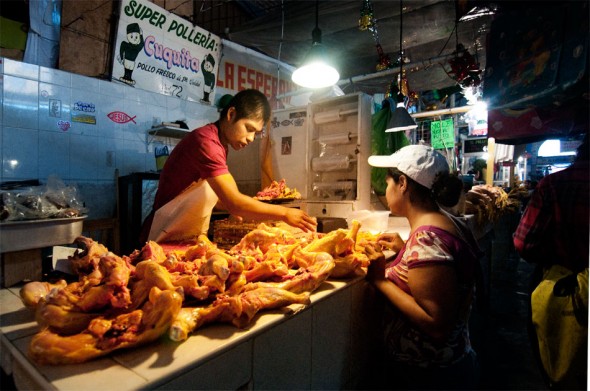 Chicken Under Tungsten: A poultry stall at Mercado 20 de Noviembre, a compact, dimly-lit marketplace in the heart of Oaxaca. 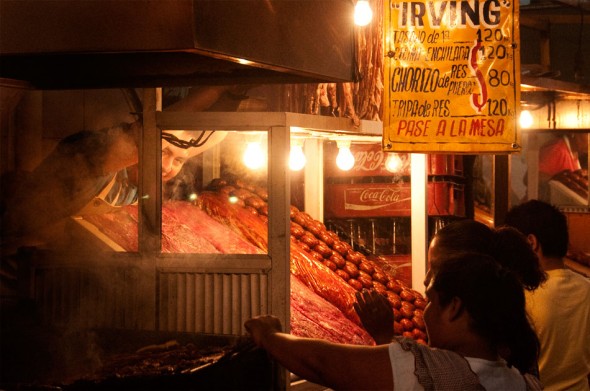 Butchery and Barbecue: One of the great charms of Mercado 20 de Noviembre is its smoky alleyway of on-site cooking stalls, where you can select a cut of meat for lunch and have it grilled before you on the spot. 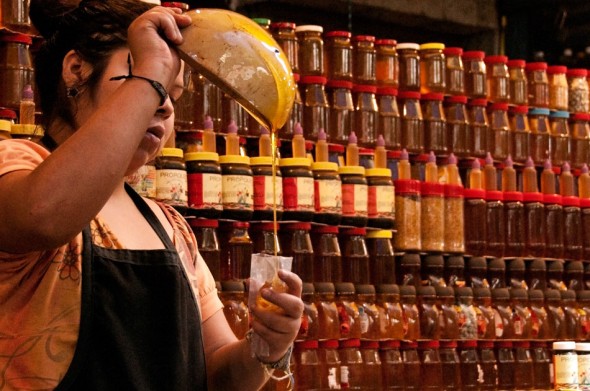 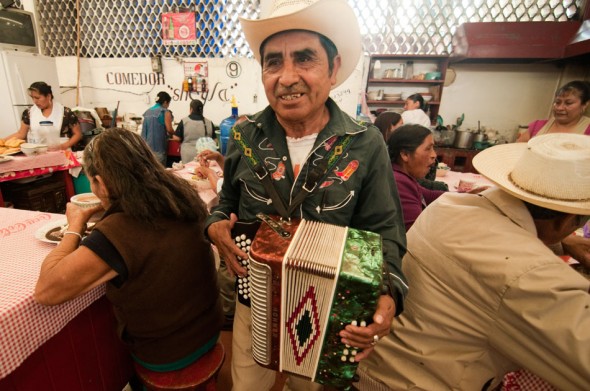 Remember to Tip the Band: Mariachi bands and individual musicians wander the mercados playing music for those eating at the comedors (regardless of whether or not those eating actually want them to) and then ask for tips, which are not always forthcoming. 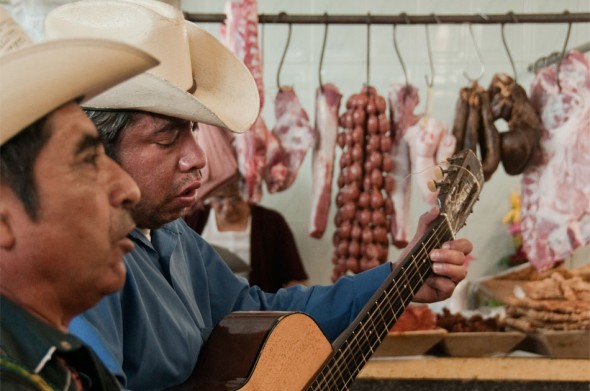 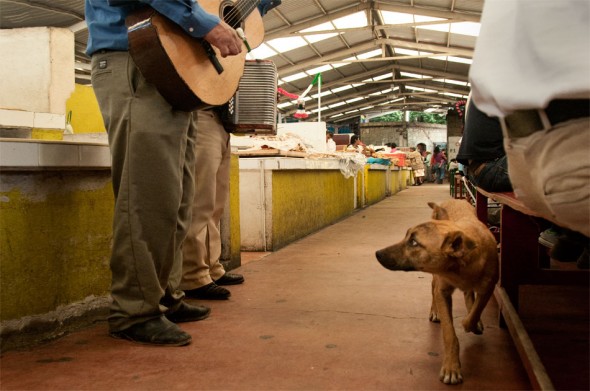 Es la vida de un perro: Dogs aren't very popular in Mexico and every village has a good many strays wandering around looking for something to eat. 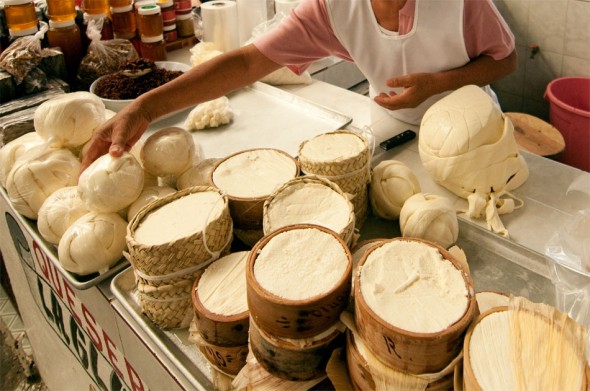 Well, Obviously it's Not Meant to Be Taken Literally. It Refers to Any Manufacturers of Dairy Products: A cheese stall in Villa de Etla, specialising in the stringy Oaxacan cheese that is used in cooking throughout Mexico.