Viewing: Home › Between Two Anniversaries › Land, Liberty and the Scene of a Murder

La Hacienda Chinameca, where Emiliano Zapata Salazar was shot in 1919, is falling apart: rusty pipes border broken windows, tufts of grass sprout from cracks in the pavement. “Original,” the old woman tells me as she leads me across the courtyard to the building. “Todo original.” It bears comparison with the Hotel Lorraine in Memphis, Tennessee, where Martin Luther King, Jr. was shot in 1968. That murder site has been completely gutted, reimagined and retrofitted as the National Civil Rights Museum, the rooms in which Dr King and his party were staying faithfully refurbished with era-appropriate items. Beyond the hotel’s outdated facade, very little that’s original remains. In Chinameca, the door to the building is locked, and the old woman doesn’t know where she put the key. Peering through the windows reveals little more than some dusty photocopies of Zapata stuck to the walls. But the sites do have something in common. In Memphis, you can see the spot where Dr King was felled, a differently-coloured square of concrete marking the place where another, blood-stained one was cut away and replaced. In Chinameca, at the hacienda’s gate, a golden statue of Zapata stands in what eyewitnesses claimed was the very spot where he, too, was gunned down, shot in the back by the very honour guard that was supposed to be welcoming him into town. The base of the statue has been stained with some paint from the recent bicentenary celebrations. There are three little splotches of red, white and green and no one has bothered to wipe them away. 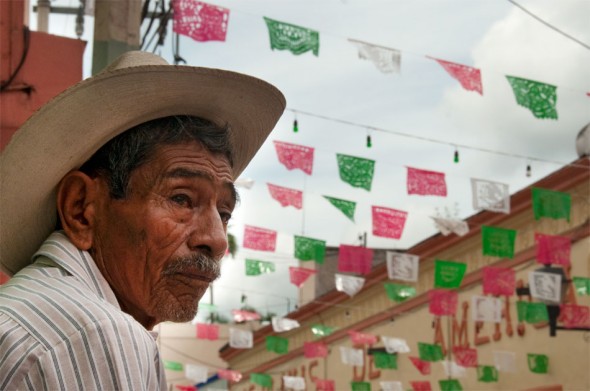 A Face in the Flags: An elderly man looks up the street in Cuautla, Morelos, while hundreds of stencilled flags in the colour of the Mexican standard flutter behind him. Throughout our time in Mexico, we will continue to come across streets festooned in these colours, as towns recover from one anniversary and prepare themselves for another. 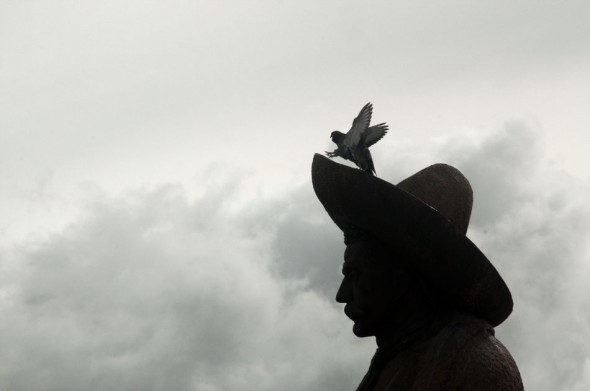 A Face in the Clouds: A pigeon lands on Cuautla’s statue of Emiliano Zapata Salazar, the leader of the Liberation Army of the South, which fought in the Mexican Revolution. Zapata, whose remains are interred at the site, was murdered roughly thirty kilometres from town at Hacienda Chinameca. 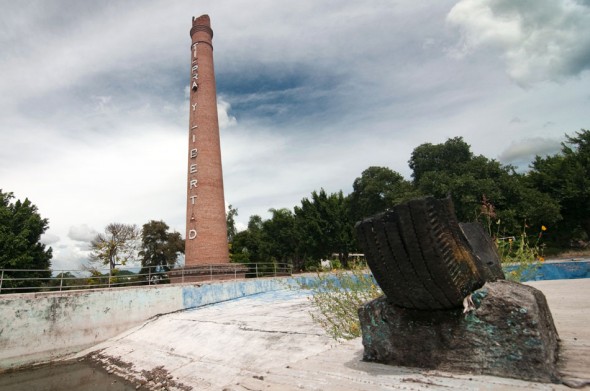 Tierra y Libertad: The catch-cry of the Mexican Revolution, “Land and Liberty” appears on a brick smokestack in the small town of Chinameca, where Zapata was killed on April 10, 1919. 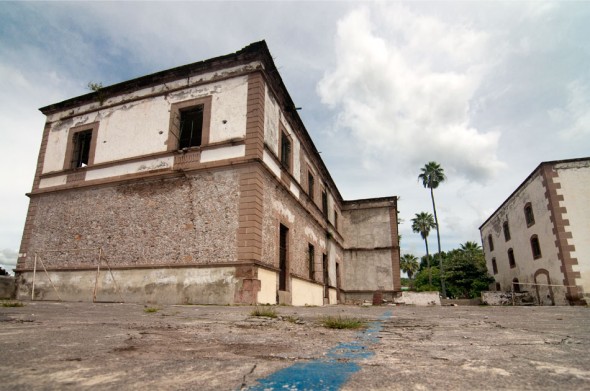 The Thin Blue Line: Hacienda Chinameca has fallen into disrepair since Zapata was murdered at its gates ninety-one years ago. 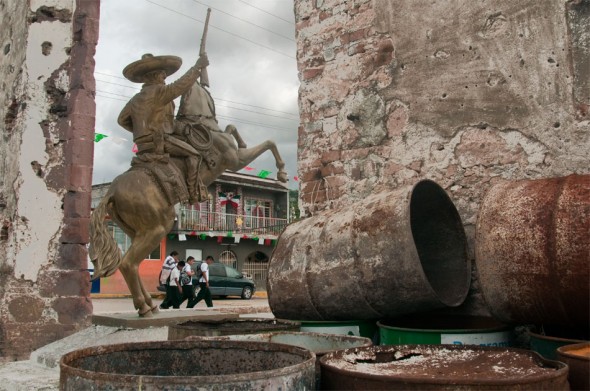 Shot: A group of schoolboys walks past the bronze statue of Zapata that stands in the place between the hacienda gates where his honour guard is said to have shot him down. 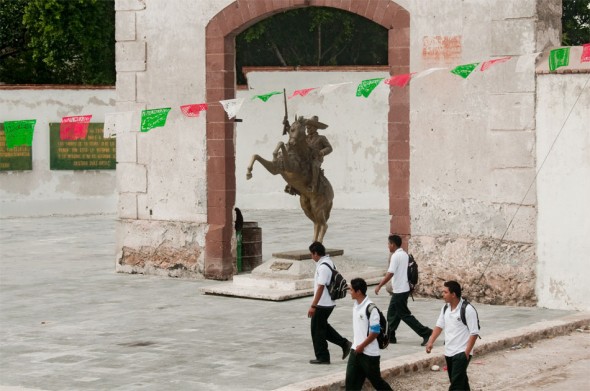 Reverse Shot: A supporter of the federal forces, Colonel Jesús Guajardo invited Zapata to Chinameca on the grounds that he wanted to enter into talks about defecting to the revolutionary side. He even had his men attack federal troops at one point in order to gain the revolutionary’s trust. After Guajardo’s men killed Zapata, they took his body to Cuautla in order to claim the ransom that had been on his head. They were given only half of what had been promised. 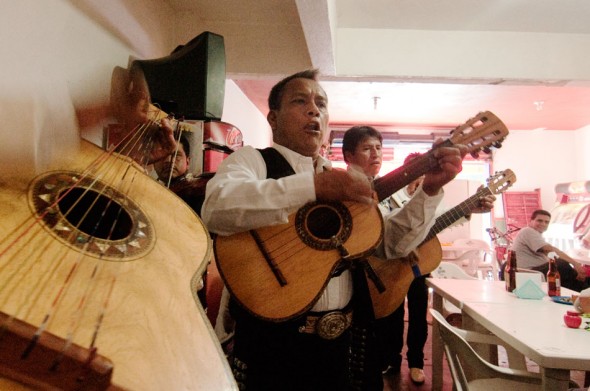 Bar-Hopping Mariachis: Back in Cuautla, mariachi bands wander from bar to bar, playing for those who can spare a few pesos. We are engaged in deep conversation with a prostitute when this lot approaches us. 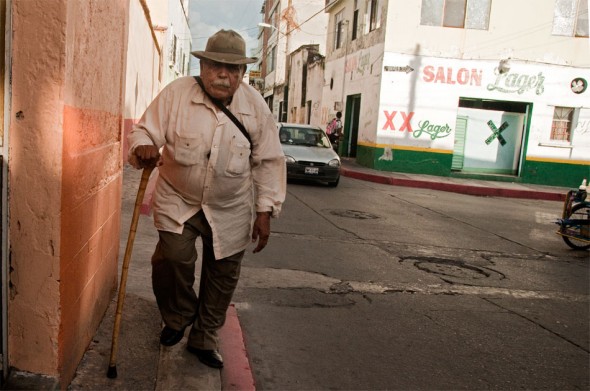 Goo Goo G’joob: An elderly man makes his way up on of Cuautla’s narrow sidewalks. In addition to playing an important role in the career of Zapata, as well as his subsequent demise, Cuautla also played an important role in the events of one hundred years earlier. During the War of Independence, a bloody siege took place in the town, beginning on February 19, 1812, and ending on May 2 the same year. 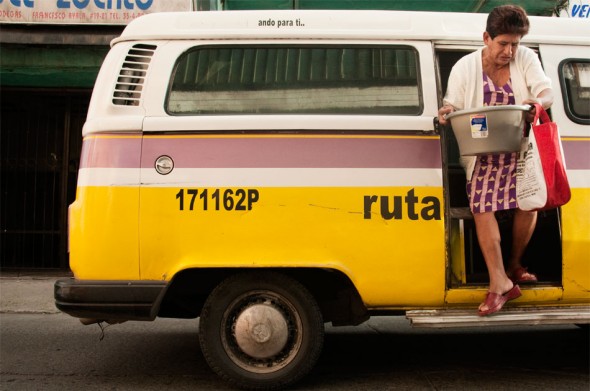 A Precarious Drop: An elderly woman climbs out of one of the city’s ubiquitous collectivos, which combine bus and taxi services in one. During the siege, Cuautla was taken by José María Morelos y Pavón—today considered one of the country’s founding fathers—who defended it for weeks against the Spanish General Félix María Calleja before finally having to retreat. 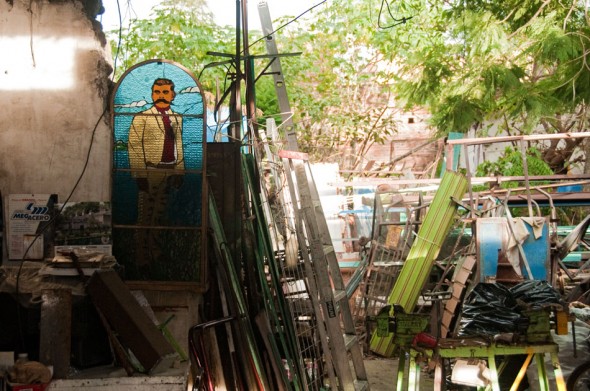 ¡Viva Zapata!: The afternoon sun provides backlighting for a stained-glass window featuring Zapata’s likeness, glimpsed from the street through the open door of someone’s workshop.